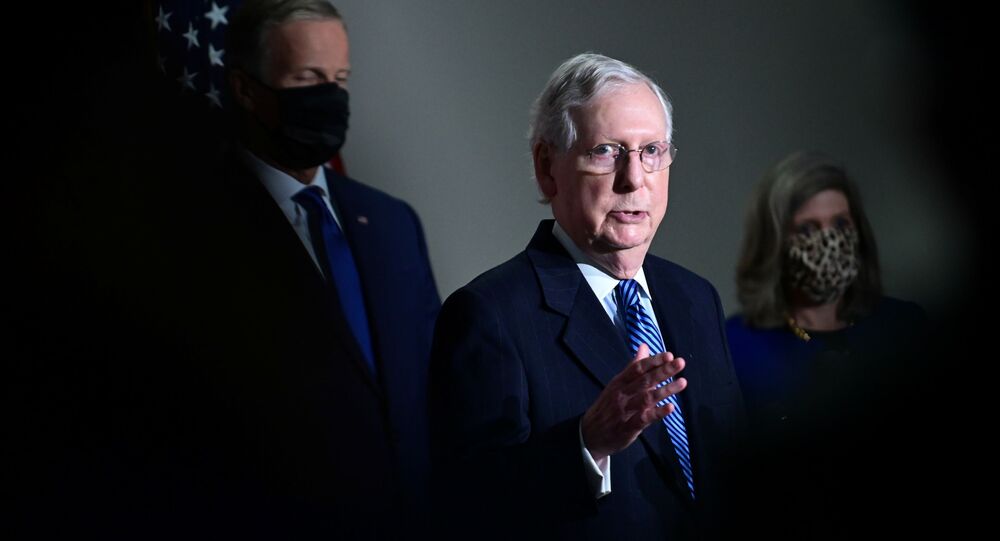 ‘Premature’ US Military Exit From Afghanistan Would Have Disastrous Consequences, McConnell Warns

WASHINGTON (Sputnik) - A premature US military exit from Afghanistan could have disastrous consequences, US Senate Majority Leader Mitch McConnell said in a statement on Monday.

Earlier on Monday, media reported that the US Department of Defence was anticipating an order from the White House as early as this week that would cut the number of US troops in Afghanistan and Iraq in half by mid-January.

"The consequences of a premature American exit would likely be even worse than President Obama’s withdrawal from Iraq in 2011, which fueled the rise of ISIS [Islamic State terror group, banned in Russia] and a new round of global terrorism. It would be reminiscent of the humiliating American departure from Saigon in 1975," McConnell, a Kentucky Senator and the top GOP lawmaker, suggested on Monday evening.

McConnell claimed that a US retreat would reverse years of human rights accomplishments, embolden The Taliban*, and be proclaimed a victory by those the United States has deemed to be 'bad actors' in the region, including Iran.

According to the McConnell statement, former US officials would see a withdrawal as a "symbol of US defeat and humiliation and of victory for Islamist extremism."

Earlier this month, then-Defence Secretary Mark Esper, in a classified memo to the White House warned against a rapid withdrawal of US troops from Afghanistan, media reported.

Trump tweeted in October that all US troops would be home by Christmas, only to have his tweet be disavowed by US National Security Adviser Robert O'Brien who said that thousands of troops were "on path" to remain in the nation into early 2021.

Trump has sought to deliver on a pledge to end the longest war in US history. After the Trump administration reached a deal with The Taliban in February, the number of troops was drawn down to 8,600 in July, with another 4,000 troops expected to leave in the fall. By early next year, the contingent could be reduced to 2,500 soldiers.

* The Taliban is designated as a terrorist organisation in Russia

NATO Has Reduced Number of Troops in Afghanistan to Under 12,000, Stoltenberg Says