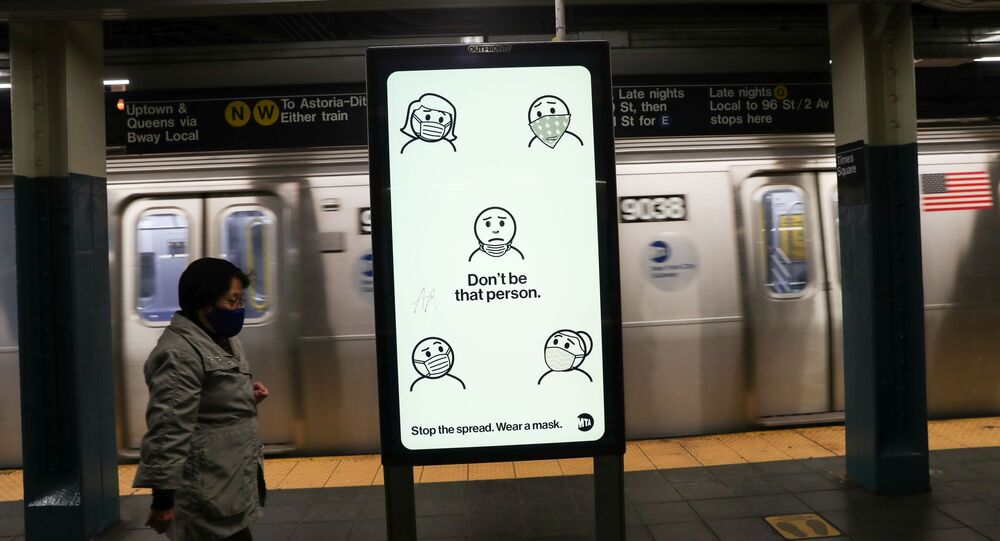 It appears that not only coronavirus infections but also crime rates are rising in New York City, for which President Donald Trump has blamed the local Democratic leadership, namely Mayor Bill de Blasio.

More than 300,000 New Yorkers may have left the city in the past 8 months amid the pandemic, the New York Post reported on Saturday, citing data obtained from the US Postal Service.

In total, 295,103 change of address requests have been filed in that time. Since a single request could be filed for an entire household, these numbers could in fact be higher.

NYC Mayor Bill de Blasio took to Twitter on Friday to say that this week is "critical" for the city and urged New Yorkers to comply with the COVID-19 guidelines, including social distance, which, however, received a backlash on social media. Many users have considered his words hypocritical since just recently, Democratic mayors and governors were seen celebrating the projected victory of Joe Biden.

Unless of course the large crowd is for a protest or a celebration for a political candidate the you endorse.

Other netizens questioned the effectiveness of de Blasio's COVID-19 policies and suggested he should base them on the trend, not today's numbers of infections, and that instead of shutdowns, it would be better to provide residents with more opportunities to get tests and treatment.

Why don't your @NYCHealthSystem testing sites have appointments? Asking people to wait on long lines as it gets colder out is not smart Bill.

Open more testing facilities, I see long lines around the corner everywhere. Here’s a chance to make yourself useful

Meanwhile, rising crime is also cited as one of the main reasons for the massive exodus. The United States, on the whole, has seen a surge in homicide rates, while in NYC just on Monday, six people were shot in Brooklyn, and another shooting took place on Tuesday, claiming the life of one person and injuring two others. As of Friday, more than 1,300 shootings have been registered in the city, claiming over 1,600 victims, police said.

Over 1300 shootings over 1600 victims in Nyc, when is this going to be addressed

In mid-September, President Trump expressed concerns over the criminality in NYC, apparently sarcastically, in response to a tweet by Mayor de Blasio inviting the New Yorker to "enjoy a beautiful day". The president called on the local government to rehire the NYPD's anti-crime unit, which was dismantled earlier this year.

But people don’t want to get mugged, beaten up, or killed. Let New York’s Finest (who proudly endorsed me!) do their job. Rehire crime squad and fired police. They will bring safety back to NYC, FAST!!! https://t.co/u14t0oSNVN

Rudy Giuliani, former NYC Mayor and now Trump's personal lawyer, lashed out at de Blasio, "a self-described progressive Democrat", for his failed policies in the city, which under his administration, was one of the safest cities in America.

"New York City, once described as America's crime capital, had become by the mid 1990s America's safest large city. Now, today, my city is in shock. Murders, shootings, and violent crime are increasing at percentages unheard of in the past."

In late August, following a continued wave of anti-police and anti-racism riots across the country, which saw frequent episodes of vandalism and looting, a police union chief, Patrick Lynch, said that the crime rate was rising because "the Democrats have walked away from us".

Following Trump's tweet, de Blasio's office accused him of lying, adding that overall crime is down in NYC.

"There are multiple lies in this tweet (index crime is DOWN, assault is down, NYPD disbanded, not fired, the Anti Crime Unit)", Press Secretary for NYC Mayor Bill Neidhardt tweeted in response to the president.

While the average crime rates are indeed lower, it is homicides that are on the rise in NYC. For the spike in gun violence, the NYPD earlier blamed bail reform and the release of about 2,500 inmates over fears of COVID-19 spread in NYC jails.