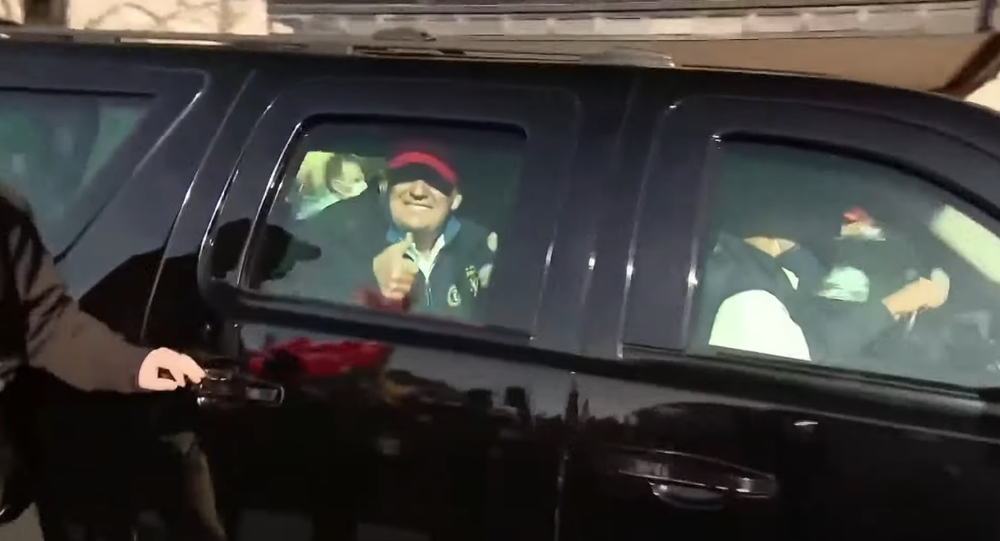 Tens of thousands of people descended on the US capital Saturday to express support for the President as he continues to concede to Joe Biden, who was declared ‘president elect’ by major US media outlets last week. The Trump campaign accuses its opponents of election fraud in multiple battleground states. Democrats reject the claims.

Donald Trump offered an impromptu greeting to his supporters on Saturday, smiling and giving the thumbs-up from inside his armoured SUV as his motorcade drove through the streets of Washington, DC, reportedly on the way to his golf course in Sterling, Virginia.

Amateur footage from the scene showed crowds chanting “USA! USA!”, “Four More Years!” and “We Love Trump!” as the convoy of vehicles including an armoured black Chevy Suburban containing the President drove by, with Secret Service agents and police barely managing to keep supporters at a secure distance from his vehicle.

Demonstrators waved American flags and Trump 2020 banners, as well as self-made signs reading ‘Best prez ever’, ‘Stop the steal’, and ‘All aboard the Trump train!’

Bloomberg got footage of the view from inside one of the vehicles in the motorcade, with some areas along the route audibly descending into a deafening roar as Trump supporters waved the President through.

According to WUSA9, the Trump motorcade deliberately diverted from its planned route to make a loop around Freedom Plaza, where supporters gathered.

AMAZING! Can hear you all from the West Wing Colonnade. A beautiful day in Washington, D.C. THANK YOU, PATRIOTS!! #MAGA🇺🇸🦅 pic.twitter.com/RJJ8bvYlfr

Saturday’s gathering , known as the Million MAGA March, is being held in support of Trump’s move to challenge the preliminary results of the election in battleground states including Arizona, Michigan, Pennsylvania and Georgia.

Counter-demonstrations are planned in Washington, DC. Similar pro-Trump rallies with names such as ‘March for Trump’ and ‘Stop the Steal’ are taking place in other cities on Saturday, with pro-Biden demonstrations and protests opposing both candidates also set to occur.

Trump appeared to give a nod to the planned demonstrations, tweeting Friday that it was “heart-warming to see all of the tremendous support out there, especially the organic Rallies that are springing up all over the Country, including a big one on Saturday in DC. I may even try to stop by and say hello.”

The scene on Saturday stands in sharp contrast to the 'welcome' the Trump motorcade received when arriving in Washington last week, when protesters shouted obscenities, gave him the finger and waved him goodbye.

Trump’s motorcade gets a warm welcome as they return to the White House pic.twitter.com/sipr7iHN2s