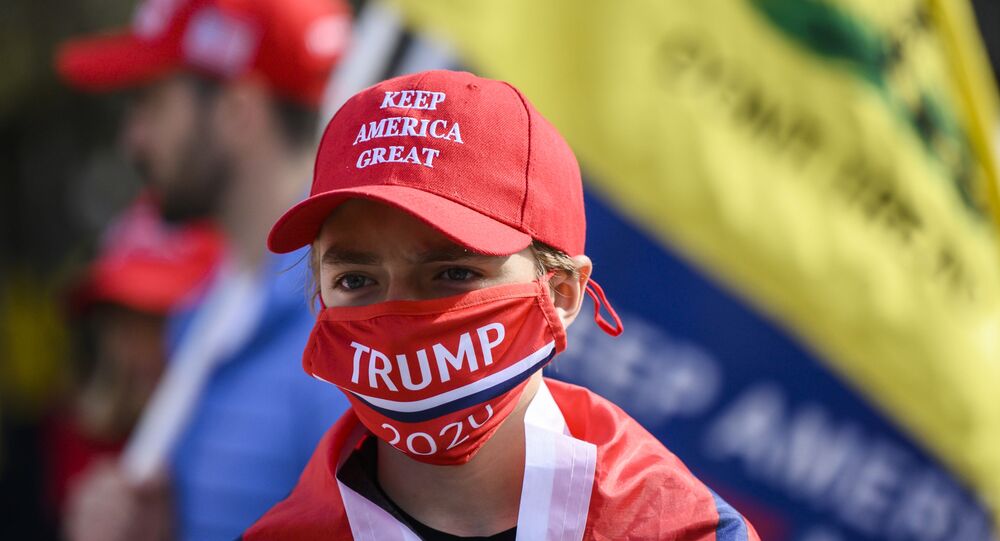 Watch a live broadcast from outside the US Supreme Court in Washington DC, where supporters of President Donald Trump have gathered to protest against the results of the 3 November presidential election after US media declared Joe Biden "president-elect" despite the ongoing vote count.

The participants of the rally, who are joined by the "Proud Boys" group, believe that the 3 November election was rigged because of the mail-in ballot process, which helped Democratic hopeful Joe Biden take the lead in the nationwide vote. Donald Trump has not conceded, and his campaign has launched legal proceedings, seeking a recount of ballots in key states.

The crowd on their way chants "Four more years", "Stop the steal", "We want Trump", carries banners and placards in support of the incumbent. "We are going to hit over a million", a street vendor says without specifying if it is about the turnout or expected sales.

"I am here simply to support my President. For all he has done for us the least we can do is to show that we will not stand any fraudulences, any improprieties, any funny stuff with the election", a Black woman who introduces herself as Vanessa said, adding that the least they can do is "to show up for our president".

Tony, an elderly gentleman in a T-shirt "Latinos for Trump," learnt about the rally yesterday night and immediately decided to go.

"After all, I live down the road, just three hours away", he smiles. "I think we all have the same idea to show support for the president who we feel was re-elected president".

Police closed a large part of the city centre to accommodate the rally and beefed up their presence for fear of altercations between Trump supporters and leftist counter-protesters who are also expected to take to the streets.

So far the incidents are few and insignificant. A Trump-hater displayed a placard of profanities toward the president and his voters. "We still love you", a group of women in red MAGA hats responded.

A conflict between an isolated counter-protester and a group of Proud Boys, conspicuous in their black and yellow attire, some in helmets and bulletproof vests, but none with weapons, was quickly broken up by militia commanders. "Not in DC", one of them shouted.

Similar protests called "Million MAGA March" and "March for Trump", as well as counter-protests, are expected to take place across the country at the weekend.