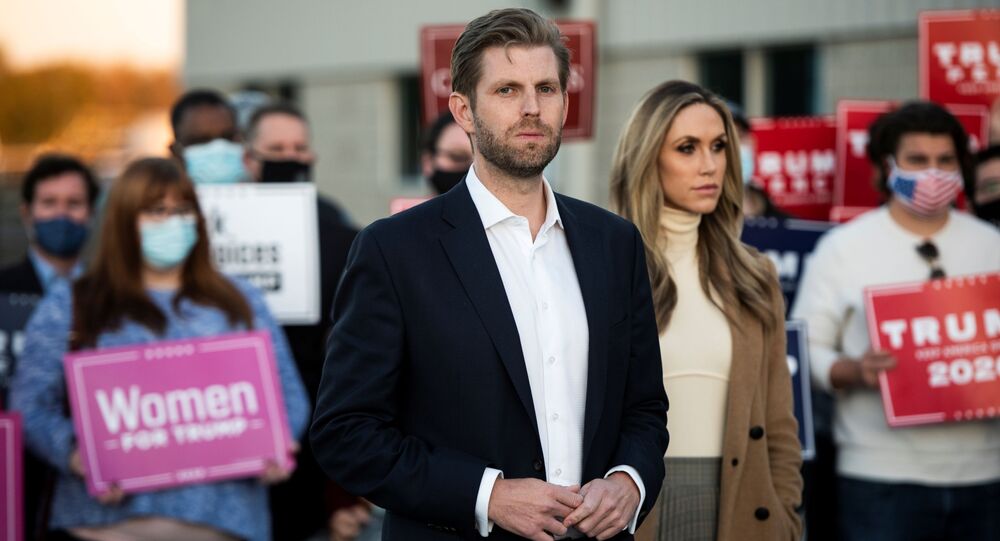 Eric Trump, the second son of US President Donald Trump, presumably encountered a scheduling issue Tuesday morning when his Twitter account encouraged Minnesota voters to head to the polls and get out the vote.

“Minnesota get out and vote!!!” Eric Trump wrote in a November 10 tweet, perplexing voters a week after voting for the US presidential election wrapped up.

But of course Eric Trump scheduled an Election Day tweet for the wrong week... pic.twitter.com/a4tL0UYRm8

The tweet was taken down after an hour, according to The Independent. Nevertheless, netizens were quick to comment on Eric Trump’s delayed message to voters.

BLURP: So the “team” that scheduled a press conference at a landscaping business, and a tweet a week after the election, wants you to believe they’ve discovered fraud somewhere. 🤪🤣😂

I think we know who booked the Four Season.... total landscaping!

Welp, we found the voter fraud... Call the team!

Eric Trump tweeted and deleted, today, “Minnesota get out and vote!”

Which implies he scheduled election tweets for *the wrong Tuesday*

Eric Trump just told Minnesota to get out and vote. We have a challenger.

Meanwhile, Eric Trump is also coming under fire for his recent amplification of misinformation regarding the handling of mail-in ballots in Pennsylvania.

In actuality, a total of nine military ballots - all with votes cast for Trump - were found to have been discarded in a dumpster in Luzerne County, Pennsylvania, according to a September 24 announcement made by US Attorney for the Middle District of Pennsylvania David Freed, citing the Federal Bureau of Investigation.

The temporary seasonal contractor who made the apparent error was promptly terminated by the Luzerne County Elections Bureau. Luzerne County Manager C. David Pedri also noted election officials worked closely with the FBI during its probe.

“While the actions of this individual has cast a concern, the above statement shows that the system of checks and balances set forth in Pennsylvania elections works,” Pedri wrote in late September.

Despite Eric Trump’s assertion, no ballots were found in drainage ditches, and Pennsylvania Secretary of State Kathy Boockvar has stated there was no “intentional fraud,” but rather an error in processing the ballots.