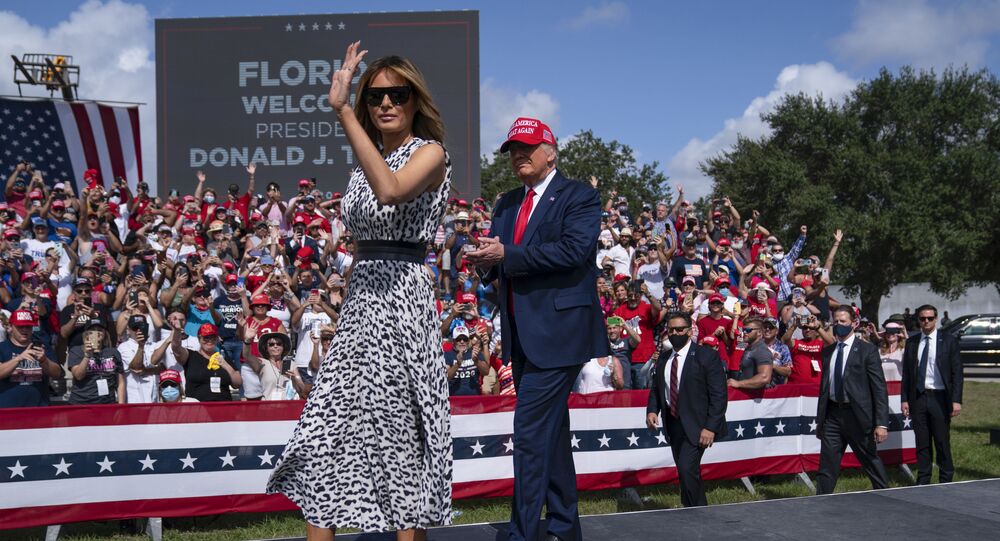 In 2018, Michael Wolff claimed in his book "Fire and Fury" that Melania Trump had burst into tears - "not of joy" - when she learned that she would become the first lady of the United States, after her husband improbably triumphed in the the 2016 US presidential election.

Melania Trump is "counting minutes" before she can divorce Donald Trump, who is projected to lose the Oval Office to Democratic candidate and alleged President-elect Joe Biden, The Daily Mail reported, citing former White House aides.

"Melania is counting every minute until he is out of office and she can divorce", said Omarosa Manigault Newman, a former aide, cited by The Mail. "If Melania were to try to pull the ultimate humiliation and leave while he's in office, he would find a way to punish her".

According to aides, the marriage between Donald and Melania is "transactional", and they have separate bedrooms in the White House.

Former Trump aide Stephanie Wolkoff claimed that Melania renegotiated her post-nuptial agreement, so that her son Barron could have an equal share in the reported Trump fortune.

In 2018, allegations emerged that Melania had burst into tears in 2016 when Donald Trump won the presidential election. According to Vanity Fair, she did not want to be the first lady of the US "come hell or high water".

The claims were made in the book "Fire and Fury" by Michael Wolff, as the author claimed that Donald Trump Jr., the 45th US president's eldest son, said his father "looked as if he had seen a ghost. Melania was in tears—and not of joy."

While continual rumours circulate around the presidential couple, Melania herself has repeatedly refuted claims of unhappiness in her role, as her spokesperson said that the book was "clearly going to be sold in the bargain fiction section".

"Mrs Trump supported her husband's decision to run for president and in fact, encouraged him to do so. She was confident he would win and was very happy when he did", the spokesperson suggested.

Commenting on Wolkoff's personality, Melania described her former aide as a woman of "dishonest behavior", saying that Wolkoff routinely and secretly recorded her phone calls and released sections out of context.

Netizens, who have long fueled allegations that Melania will be happy to leave the White House after a moving truck was spotted near the structure, have ramped up additional hype around a divorce by the couple.

Melania Trump on her way to file for divorce pic.twitter.com/twvQYW6D2u

melania trump leaving the white house to go get a divorce pic.twitter.com/0BFpY5cXP8

​Trump adviser Jason Miller, apparently commenting on divorce allegations, claimed that "the FLOTUS story is also fake news", while refuting additional new reports that Jared Kushner, the president's son-in-law and a senior White House advisor, advised his father-in-law to concede after the US media projected Joe Biden's victory in the presidential election.

​Melania Trump has not commented publicly on speculation about her divorce from Trump.

During her husband's re-election campaign, the first lady delivered a speech at the Republican National Convention, praising her husband's "total honesty" and his support for her. Despite continual allegations of frosty relations with her husband, she repeatedly insisted that the two were "fine".