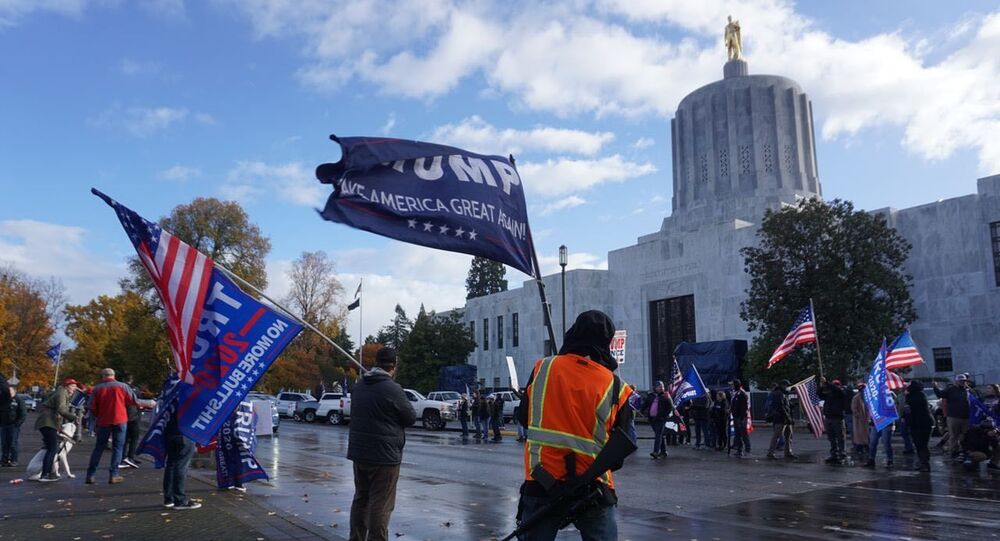 SALEM, Oregon, (Sputnik) - When the Democratic presidential nominee Joe Biden was kicking off his victory speech, on the opposite side of the United States his most radical black-clad allies hit a police cordon on their march to confront the most violent defenders of Republican incumbent Donald Trump.

"This has been declared an unlawful assembly," officers informed Black Lives Matter activists in Salem, Oregon, through a loudspeaker. "You have five minutes to disperse and leave the area. Failure... to comply with these orders may result in the use of force against you to include impact munitions and up to tear gas."

Baton-wielding policemen crossed the road in full riot gear and propped up by an armored vehicle.

© Sputnik
Baton-wielding policemen crossed the road in full riot gear and propped up by an armored vehicle.

"AC, AB - all cops are bastards," protesters chanted in a defiant response.

We Want it Fair

Hours after US media proclaimed Biden the winner of the presidential race, hundreds of Trump’s supporters took out to the square in front of the Oregon Capitol to challenge the legitimacy of the election and demand the recount, echoing the incumbent’s allegations of a massive voting fraud that stole his victory.

"We need to look into it. We need to take the time to make sure that it is a free and fair election, that there is no ill and illegal thing going on. We are going to find out and show our support for the President," says a young woman who carries her baby and a placard "Trump-Pence. Keep America Great. 2020."

Protesters for several hours stood along the road waving flags, displaying placards in support of Trump and demanding "Recount," "Legal votes only," "Stop the steal." Passing motorists would either show them an appreciative thumb or a defiant middle finger depending on political allegiances.

He describes himself as "one of those people" who have been following politics for all their lives but never registered to vote until 2016. "

Prior to that I didn’t believe we had a choice. I believe it was a selection, not an election," Garry explains.

He think the recount alone is not enough and the whole electoral system needs to be reshaped.

"I think we need to redo the way the election held and bring them into more uniformity. We can’t have 50 different systems for 50 different states," Garry says.

Level-headed, good-mannered, smiling people were a clear majority at the pro-Trump rally, but there was a radical group who came in protective gear, with bats, knives, maces and firearms.

In two separate incidents a girl was pepper sprayed and a man was hit in a face before policemen interfered and shielded the victims with their bikes and bodies from a pursuing mob. "F.... Antifa," the mob chanted.

Leftist activists, whom their foes collectively refer to as Antifa and accuse of a violent anarchist behavior, held a dueling rally just few blocks away deploying armed squads to guard the perimeter. Scheduled before the announcement of Biden’s win, the event was not exactly a victory celebration, rather a discussion panel for issues of concern, like racial injustice and communal efforts to aid vulnerable populations.

Yet many in attendance say they are glad that Trump is leaving the White House and carry sign with a name of the projected president-elect.

"Very," replies Carla, an elderly white lady, to a question if she feels jubilant about the election outcome. "It’s a big celebration, but it’s also seeing how many people voted opposite of what I did and realizing how much work we have to do. It also makes me sad that we are so divided."

Her son is an African American, who, according to Carla, has been afraid to walk the streets for the last three plus years.

Trump’s followers, in her view, are so adamant, so opposite, so sure of the information they have that they will not open their eyes to anything else and it will take years to reach out to them and undo the incumbent’s legacy. Proud boys amaze Carla the most.

"I feel like, ‘Wow, why do you have to be such a bully?’ What has it ever solved?" she wonders.

Suddenly a word spreads across the venue, "They are coming, they are coming." Dozens of activists arm themselves with clubs, shields and paintball guns, reporters don hamlets and gas masks, bracing for Proud Boys’ attack. They never come, and the leftists set out on a march to the State Capitol themselves under the banners of the Black Lives Matter movement.

© Sputnik
Leftists set out on a march to the State Capitol themselves under the banners of the Black Lives Matter movement.

"AC, AB — all cops are bastards," they chant in response to a police demand to disperse.

A few tense minutes later the crowd, however, moves reluctantly from the roadway to the sidewalk and is allowed to proceed — only to meet in front of the Capitol building another police cordon separating them from a small remaining group of Trump supporters with several Proud Boys in their conspicuous black and yellow outfits.

Two Trumpists find themselves on the wrong side — in a pickup truck surrounded by the leftists. The crowd confronts them verbally, punctures the tires one by one, but both men remain unscathed, if visibly shaken, and soon are rescued by an advancing police force.

Officers orders the rightists to retreat in their cars and pushes the leftists to the sidewalk, effectively putting a lid on the altercation. Despite fiery rhetorics, all parties, including the police, refrained from violence throughout the stand-off, suggesting that ominous forecasts of a fratricidal conflict in the post-election US may be far-fetched.

'There Will be Calls to Get Rid of Electoral College', Professor Says About US Presidential Race