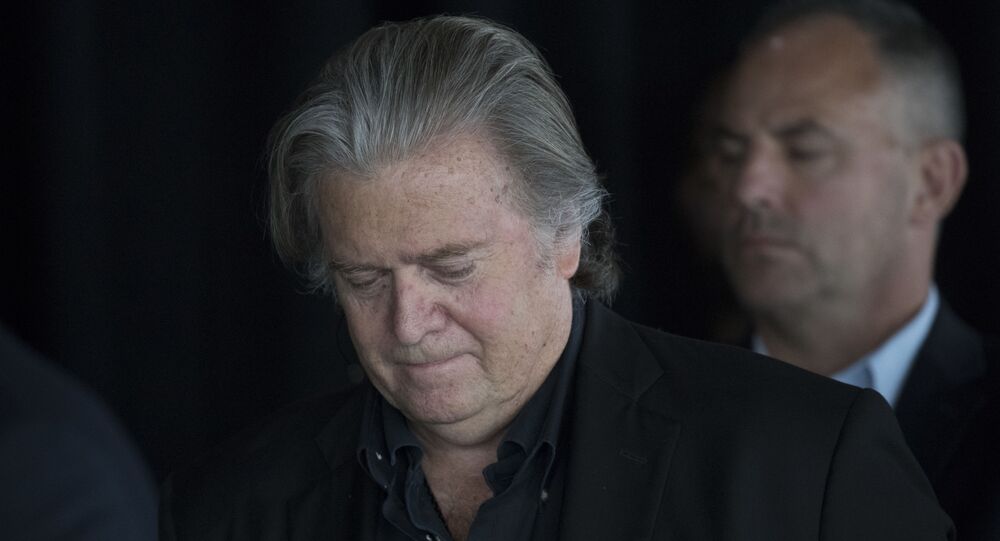 Bannon, a former White House official and a long-time Trump supporter, faced an instant backlash and the banning of his Twitter account after saying on a podcast episode that he would put the heads of White House top infection specialist Dr. Anthony Fauci and FBI Director Christopher Wray on pikes for public display.

A lawyer long employed by Steve Bannon, William A. Burck, has filed a letter to the court revealing that he is stepping down from his position of working with Bannon and noting that the latter is now seeking a new attorney.

“Mr. Bannon is in the process of retaining new counsel, and Quinn Emanuel intends to move to withdraw", Burck's letter to the judge said.

Burck defended Bannon in a Manhattan federal court after the latter was charged with wire fraud and money laundering. Burck's move to withdraw from the position comes one day after Bannon suggested decapitating Dr. Anthony Fauci, the head of the US National Institute of Allergy and Infectious Diseases and FBI Director Christopher Wray.

JUST IN: William Burck notified a court he intends to withdraw as BANNON's attorney.

He's represented Bannon (as well as McGahn and Priebus) through years of Russia-related investigations.

​On 5 November, Bannon's Twitter account was banned following suggestions made during his live show, where he said he would behead Fauci and Wray.

"Second term kicks off with firing Wray, firing Fauci, no, I actually want to go a step farther, but the president is a kind-hearted man and a good man," Bannon asserted. "I'd actually like to go back to the old times of Tudor England. I'd put their heads on pikes, right, I'd put them at the two corners of the White House as a warning to federal bureaucrats, you either get with the program or you're gone", Bannon said in an episode of his podcast "Bannon's War Room".

#US: Trump loyalist and criminal Steve Bannon declares Dr. Fauci and FBI Director Wray should be beheaded and have their heads mounted on pikes at the White House "as a warning to federal bureaucrats".

According to a YouTube spokesman, Alex Joseph, cited by The New York Times, the video of the podcast episode in which Bannon made the beheading suggestion has also been removed from YouTube.

“We’ve removed this video for violating our policy against inciting violence,” Joseph said. “We will continue to be vigilant as we enforce our policies in the postelection period.”

A loyal Trump supporter, Bannon was formerly a chief strategist in the Trump administration before being fired by the president. In August, he was charged with fraud, after, according to federal prosecutors, Bannon and three others used cash received for a "We Build the Wall" fundraising campaign in an "inconsistent way".

Bannon pled not guilty to the accusations and was later released on a $5 million bond, pending trial.