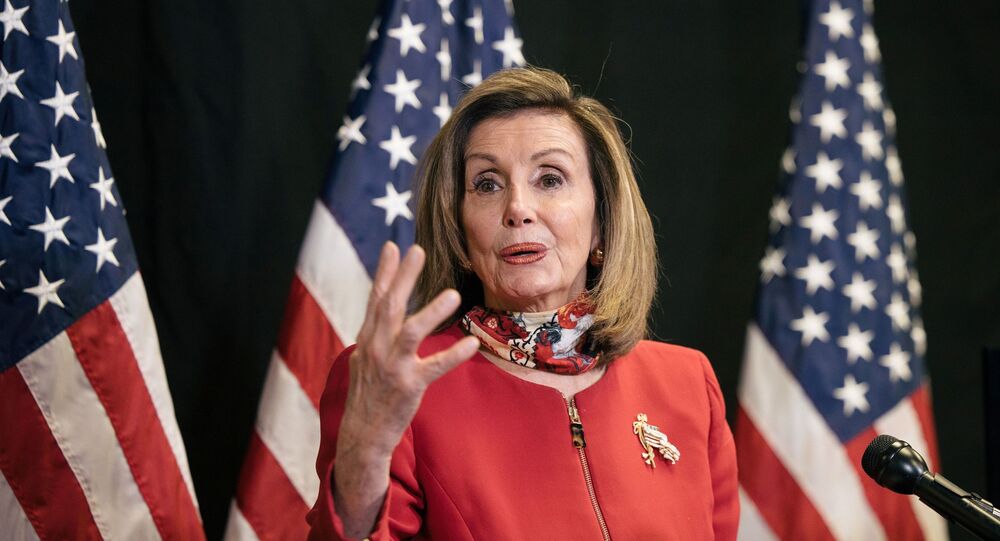 As the current projections of the United States presidential election look likely to result in a Joe Biden victory for the White House as Donald Trump's routes to a second term narrow, the Democratic Party has suffered some losses in the House of Representatives, potentially leaving speaker Nancy Pelosi in a precarious position.

US Speaker of the House Nancy Pelosi officially announced her intention to again run for speaker as the Democrat majority falls and moderates criticise progressives for the loss.

Pelosi issued a letter to each Democratic house member on Thursday setting out a two-year agenda and requesting support for her reelection bid.

She also claims Democrats have a "mandate," despite losing seats in the House and GOP retaining control of the Senate. pic.twitter.com/4c6cHlWmEQ

"Our vision for the next two years must be built on the success of Democratic House Majority in the 116th Congress, and to harness the extraordinary visions, values and vibrancy of our Caucus to secure the progress that the American people deserve", Pelosi wrote in the letter seen by Fox News.

"In that spirit, I am writing to request your support to be re-elected as Speaker. I do so with the utmost respect for the diverse viewpoints in our Democratic Caucus, the gravity of this role the urgency of the challenges ahead. I also do so with the great joy and appreciation to so many of you who have already offered your support", she added.

While Joe Biden is on course to be victorious, the election is not yet concluded, and Democrats have suffered a net loss of four House seats while reportedly holding on to their majority.

As of Friday, seven Democrats had lost reelection and no Republican incumbent had been deposed. The seat of Libertarian Rep. Justin Amash in Michigan also went to a Republican.

At present, the arithmetic stands at 212 House seats for the Democrats and 194 for Republicans, with 30 races still to be called. Republicans express optimism that they will be able to flip more seats as the counting continues and they could reach over 208 members.

Republicans have predicted that Pelosi could fail to reclaim her position.

"I mean Nancy Pelosi doesn't even have a majority where she can be elected speaker again," Rep. Tom Emmer, R-Minn., chairman of the National Republican Congressional Committee, claimed on Wednesday.

"Whoever would have guessed that it'd be possible that Nancy Pelosi might not be the speaker?", he said.

The race for the House of Representatives is turning out to be a wow. 👇🏻 If these current numbers hold, the Republicans would flip the House by one seat. pic.twitter.com/lGXyzOp2Xv

On Thursday afternoon, Democrats expressed their anger at the losses and blamed ideas coming from the left of the party such as socialism, defunding the police, and the Green New Deal as causing the unexpected collapse in swing districts.

According to Fox News, Rep. Abigail Spanberger, D-Va., took aim at the leftward drift of the caucus blaming the progressive agenda for her near-loss.

“We lost races we shouldn’t have lost. Defund the police almost cost me my race because of an attack ad. Don’t say socialism ever again. We need to get back to basics", she said.

Regardless of the good intentions of the "Defund the Police" push, the slogan cost the election of hundreds of Democrats all over the country. pic.twitter.com/CLI32XxvaU

​Since the rise of self-described socialist Bernie Sanders in the primary races and the election of numerous freshman congresswoman known as 'The Squad, the Democratic Party has seen a popular left-wing faction emerge.

Due to the perceived unpopular direction, some moderate Democrats could support a challenger to Nancy Pelosi as speaker, the Hill reports.

Two moderate congressional Democrats claim they and other centrist leaders are looking to remove the long-standing politician from her leadership role due to the ideological divisions within the party.

“It’s time for Democrats to elevate a new generation of leadership in both the House and the Senate,” one unnamed lawmaker told the site.

They said that Americans are "clearly afraid of "socialism" and instead want "safe streets and neighbourhoods and to vote for people who they believe will help put more money in their pockets".

"While Democratic policies can adequately address those issues, our messaging mechanism clearly cannot".

Many progressives predicted that a re-run of the centrist campaign under Joe Biden would be unable to defeat a populist Donald Trump campaign. However, amid the pandemic and the likely tight victory of the former Vice President, the future of the left in the Democratic Party remains up in the air.