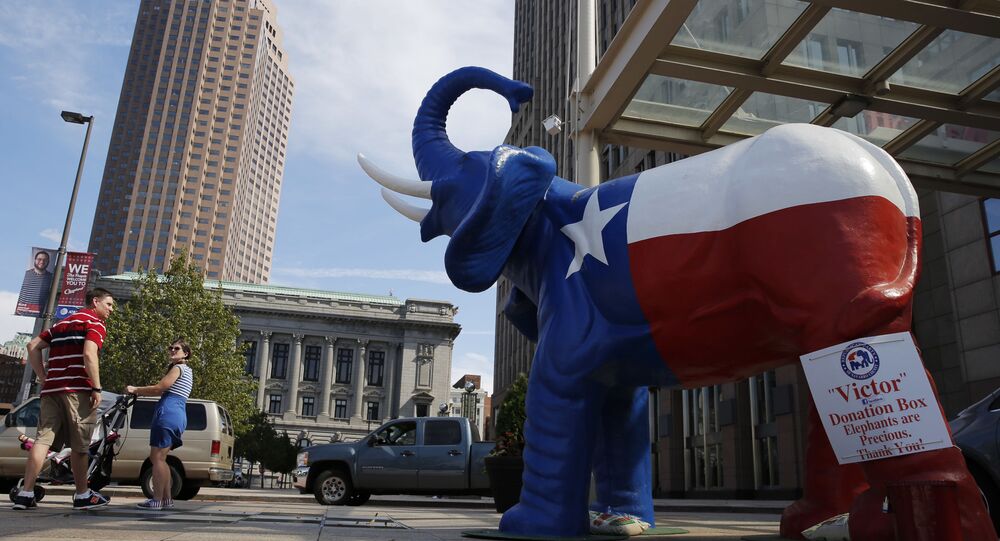 On Thursday, the president stepped up his assault on the Democrats and the media over their alleged plot to “steal” the election, claiming that “tremendous corruption and fraud” was taking place using mail-in ballots, and saying Democratic leaders of major battleground state cities could not be allowed to “engineer” the election’s outcome.

Multiple Republican lawmakers have turned on President Donald Trump, accusing him of “spreading debunked information” about alleged voting irregularities and urging him to “stop” immediately after he doubled down on his promise to challenge suspected fraud Thursday night.

“There is no defence for the President’s comments tonight undermining our Democratic process. America is counting the votes, and we must respect the results as we always have before. No election or person is more important than our Democracy,” Larry Hogan, the Republican governor of Maryland, tweeted.

There is no defense for the President’s comments tonight undermining our Democratic process. America is counting the votes, and we must respect the results as we always have before. No election or person is more important than our Democracy. https://t.co/BOO2iaTsEf

“We want every vote counted, yes every legal vote (of course). But if you have legit concerns about fraud present EVIDENCE and take it to court,” Adam Kinzinger, Republican Representative from Illinois, wrote on his Twitter. “STOP Spreading debunked misinformation…This is getting insane,” he added.

Republican Representative Will Hurd of Texas warned that Trump’s “undermining our political process and questioning the legality of the voices of countless Americans without evidence is not only dangerous and wrong,” but “undermines the very foundation this nation was built upon”.

Senator Mitt Romney, a long-time ‘Never Trump’ Republican, issued his own statement, calling on the president to “have faith in democracy, in our Constitution, and in the American people” and assuring that any voting “irregularities” would be “investigated and resolved in the courts”.

Arizona Senator Jeff Flake, another Republican who has squabbled with Trump in the past, called on his fellow partymembers to speak out, suggesting that “no Republican should be okay with the President’s statements just now”, and calling on his fellow party members not to “wait until the election is called to defend our elections and our democratic institutions”.

No Republican should be okay with the President's statements just now. Unacceptable. Period.

Florida Senator Marco Rubio, who ran against Trump in the Republican primaries in 2016, offered an indirect criticism of the president without naming him directly, tweeting that “if a candidate believes a state is violating election laws they have a right to challenge it in court and produce evidence in support of their claims”. Rubio also linked to an early tweet in which he stressed that “taking days to count legally cast votes Is NOT fraud”.

In a press conference on Thursday, Trump ramped up his attack on his Democratic opponents, pollsters and the media, alleging a plot to steal the election from him.

“We will not allow corruption to steal such an important election – or any election for that matter,” Trump said. “We can’t allow anyone to silence our voters or manufacture results,” he added, complaining that some polling places wouldn’t let “legally permitted observers” in to watch the counting of ballots. “This is a case where they’re trying to steal an election – trying to rig an election,” he insisted.

Other Republicans Rally to Trump’s Side

Not all GOP leaders agreed with the Trump-sceptic wing of the party, whose abandonment of the president has been compared by some detractors online to that of ‘rats trying to flee a sinking ship.’

“Where are Republicans! Have some backbone. Fight against this fraud. Our voters will never forget you if you’re sheep!” Eric Trump, the president’s son, tweeted, linking to a tweet by Congressman-Elect Ronny Johnson of Texas, who urged the party to “STAND UP for President Trump and fight back against the Democrats and their election fraud.”

Where are Republicans! Have some backbone. Fight against this fraud. Our voters will never forget you if your sheep! https://t.co/jLzOIJbrwV

Representative Alex Mooney of West Virginia shared in this sentiment, issuing a statement demanding “transparency and fairness in this presidential election vote count” and saying he agreed with the president.

Florida Governor Ron DeSantis urged Trump to “fight on” and “exhaust all options”, while South Dakota Governor Kristi Noem tweeted that Trump has added fighting “rigged election systems” to his ongoing battle against “the establishment and the mainstream media”.

Every Democrat-run state needs to clean up their election laws like Florida did. A fair process isn’t partisan.@realDonaldTrump has been fighting the establishment, the mainstream media, and now rigged election systems on behalf of the American people and our way of life. https://t.co/9za1fiRPRZ

House GOP leader Kevin McCarthy of California told Fox News’ Laura Ingraham Thursday that the president’s party and supporters need to “stand up” and to “not be silent” about any potential irregularities they think they’ve witnessed. “We cannot allow this to happen before our very eyes,” he said.

Representative Jim Jordan of Ohio, who defended the president in the failed impeachment trial against him, called for “election integrity” to be assured and asked “why is it always Democrat-run cities in swing states that experience voting issues?”

© AP Photo / Richard Shiro
GOP Sen. Lindsey Graham Pledges $500K to Trump Legal Fund, Says Philadelphia ‘Crooked as a Snake’
Finally, Senator Lindsey Graham, a long-time Trump critic-turned ally, similarly expressed support for the president in the form of a pledge to donate $500,000 to his legal defence fund and urged others to contribute.

The US presidential election took place on Tuesday, with Trump’s early lead against Democratic nominee Joe Biden gradually slipping away in multiple battlegrounds Wednesday, with Wisconsin and Michigan switching from Red to Blue as ballots continued to be counted. On Friday, Trump’s solid lead in Georgia disappeared, with Biden currently said to leading the president by less than 1,000 votes, with 99 percent of the results reporting in.

Trump began to accuse his opponents of trying to “steal” the election from him early Wednesday, referring to the “very strange” tendency of his “solid” early leads in key states to disappear “one by one.” Democratic officials have dismissed Trump’s claims as factually wrong and dangerous.