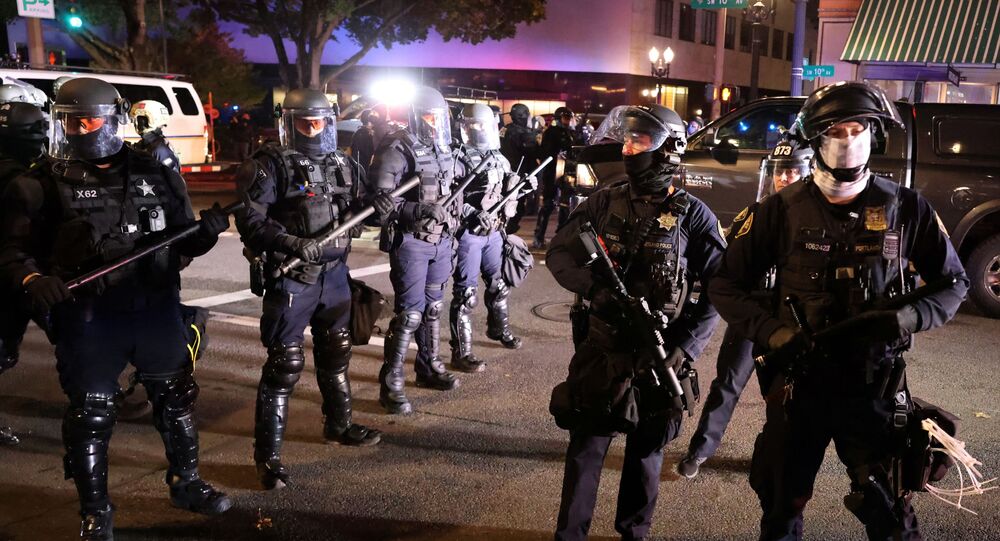 MOSCOW (Sputnik) - Police in the US city of Portland said Friday it dispersed a violent crowd and made arrests after a mob attacked the home of the city's police commissioner and the City Hall building.

The incident came the night after the Police Commissioner Dan Ryan was the deciding vote in the Portland City Council to turn down a proposal to cut the budget of the police force by $18 million, local broadcaster OPB reported.

A statement from the county sheriff's office explained that police had accompanied a group of protesters, with orders to disperse, until they reached Ryan’s house late on Thursday. This was the fourth time this week the protesters visited Ryan’s home in an attempt to pressure him to approve the police budget cut.

A mob of antifa have descended on the home of Portland city council member Dan Ryan for voting against @JoAnnPDX’s amendment to defund police. They’re attacking his home now (turn on audio). #PortlandRiots pic.twitter.com/YJoJhX3XIS

​"While there, individuals broke a window, threw burning flares and paint filled balloons at the home, and broke potted plants. That criminal activity prompted police to declare an unlawful assembly. Police provided additional announcements over the loudspeaker and on social media to disperse. Police then moved in and dispersed the crowd," the office said.

The dispersed crowd then found its way to the City Hall and set its main entrance on fire, the statement added.

A day prior, authorities deployed National Guard troops to quell post-election riots in the tumultuous city.

Portland has become an epicenter of far-left activity, with violence between police and adherents of Antifa and the Black Lives Matter movement taking place throughout the summer.