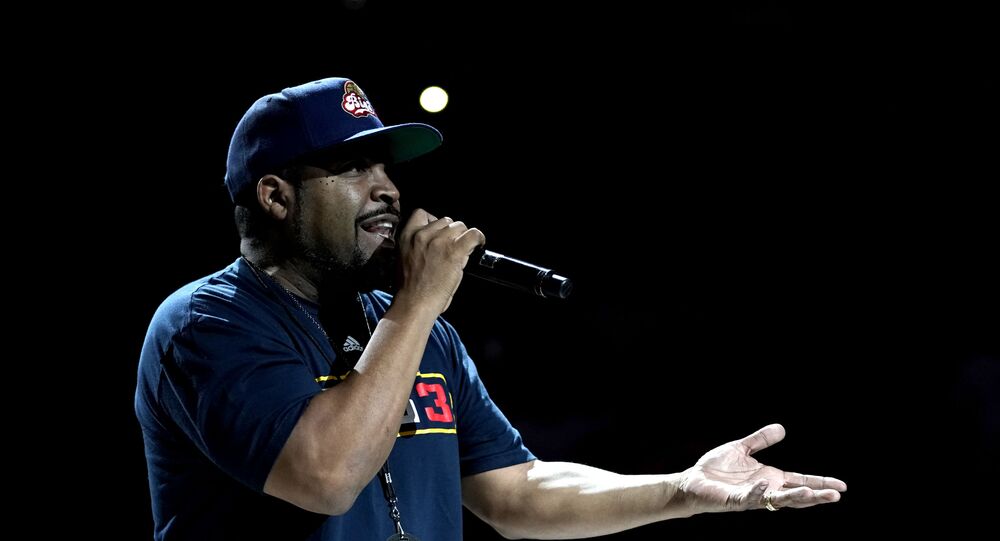 ‘Any of this On Paper?’ Netizens Dubious as Ice Cube Fends Off Backlash Over Trump Collaboration

During the protests that gripped the US over racial issues in summer, Ice Cube, who claimed he was seeking to help “heal the black community”, released a video to say he had been watching the Democratic National Convention and that “from the way it look, they don’t have a plan".

As the vote count continues in a spate of states to determine the winner of the 2020 presidential elections, O'Shea Jackson, better known for his stage name Ice Cube, has been facing a relentless wave of backlash from the black community for working with Donald Trump.

Let me get this straight, I get the president of the United States to agree to put over half a trillion dollars of capital in the Black Community (without an endorsement) and Niggas are mad at me?😂😂😂...have a nice life.

​This week the rapper went on Twitter to address the online mud-slinging campaign against him over collaboration with the Trump administration on the Platinum Plan, which outlines the POTUS’ promise to help Black Americans.

The singer has never publicly endorsed Trump, However, the artist, who was N.W.A's lead rapper and main ghostwriter on their album Straight Outta Compton in 1988, that contributed to gangsta rap's widespread popularity, found himself on the receiving end of fierce criticism by association after senior advisor to the Trump campaign Katrina Pierson thanked him on Twitter.

​On 14 October Pierson had posted a “shoutout” to the filmmaker/actor, with a raised fist emoji, following up the tweet with a GIF of the rapper smiling, and adding the caption “today was a good day,” in a nod to his legendary hit song.

However, the tweet set off a steady stream of backlash as many on social media call out the rapper for working with the Republican Party.

Best-selling author Roxane Gay went on Twitter to question if money was involved in the deal.

Good lord... how much are they paying Ice Cube??? How... does the guy from NWA become MAGA?

​On Thursday, the entertainer tweeted that he wanted to set matters straight, explaining he had gotten Trump to pledge over half a trillion dollars towards the needs of the Black Community.
Many netizens, however, were not impressed, as they argued that it might have been a “political stunt” on the part of the current Trump administration.

No. We’re mad at you because everything you think you “got,” was fairy dust.

And in the attempt, you validated a racist monster and got him votes.

You were used as a political prop to masterful effect.

Trump doesn’t keep his promises to ANYONE! Most especially not us.

HE DID THIS AS A POLITICAL STUNT TO GET RE-ELECTED. HE WAS NEVER GOING TO FOLLOW THROUGH. If he really cared he would have done this at any point during the massive civil unrest he publicly derided. Instead he used this to shore up black votes as part of his campaign...

Lies & Fabrications. First of all, you haven’t gotten him to do anything but write up a two-page wish list. Second, if you were to READ the Platinum Plan, you’d see it only promises $500 Billion in federal contracting OPPORTUNITIES which is NOT exclusive to Black people 🙄 pic.twitter.com/EioHJHHMG5

Cube, what part of "HE NEVER PAYS HIS BILLS" did you not understand? You faded yourself, bruh.

Show me the comprehensive plan for how he planned on creating these jobs and where the funding was going to come from then I will believe it. Presidents don’t create jobs they can only create a climate that will foster job creation. And Trump hasn’t done that so far, soooo...

Ice - he's a pathological liar. I think the cube may have been squared. Any of this on paper? You know for others to see? Otherwise it's just so much hot air! Show us the money!!!

​Some of the rapper’s followers were quick to support him, while denouncing those who “didn’t get “ the motives that had forced Ice Cube to work with Donald Trump.

They don’t get it Cube. I hate Trump but if he’s gonna help it’s a good thing. It’s called business. How many times have people worked for a shitty boss? Do they quit? Nope. They suck it up to put food on the table

You did right you did so much. These people don’t get it. Why things will not change unless @realDonaldTrump is re-elected. We are all better by success and personal happiness.

I'm not black but definitely its smart to work with both sides to gain representation. In the end black folks need to learn from white folks take care of your economic needs of your people first then justice will come.

At the end of the day the people mad not even worth taking seriously. Keep doing the work! Remember these same type of people called King a coon, didn’t like or respect Malcolm until he was dead. Their allegiances are in question. You’re doing exactly what you’re suppose to do ✊🏿

​Earlier, Ice Cube had shared a video on Twitter, captioned “Don’t shoot the messenger,” where he revealed that he had engaged with Democratic and Republican leaders to talk of potential plans for supporting Black communities.

​In summer, amid wide-scale US protests against racism spearheaded by Black Lives Matter (BLM) and triggered by the death of African-American man Floyd George in police detention, Ice Cube had tweeted his opinion of the Democratic Party and their presidential nominee Joe Biden’s plans for the Black community.

​He had gone on Twitter to opinion that they were yet to offer a “major plan” to economically lift Black Americans that might “secure” the vote for them.