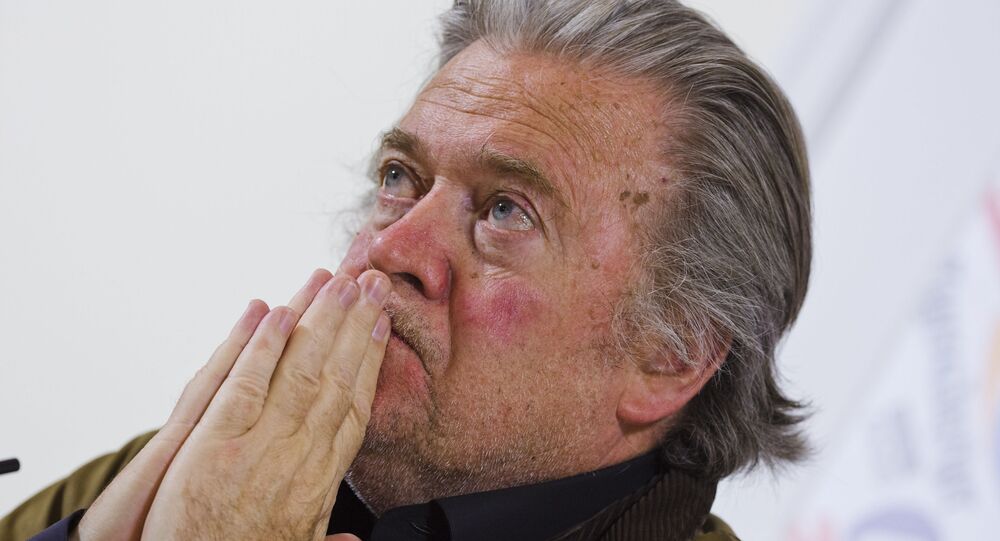 Steve Bannon is a former chief White House strategist who has a podcast he calls "Bannon's War Room" in which he, according to the program description, "brings the most up to the minute information on the coronavirus pandemic".

On Thursday, a Twitter account for Steve Bannon's podcast, Bannon's War Room, was suspended soon after Bannon said he would "put their heads on pikes" when speaking about the FBI Director Christopher Wray and the head of the US National Institute of Allergy and Infectious Diseases, Dr. Anthony Fauci.

During one of his shows, Bannon, currently indicted for wire fraud and awaiting trial, commented on the unlikely possibility of Trump firing both Wray and Fauci, before moving on to say that he would "go a step farther".

"Second term kicks off with firing Wray, firing Fauci, no, I actually want to go a step farther, but the president is a kind-hearted man and a good man," Bannon asserted. "I'd actually like to go back to the old times of Tudor England. I'd put their heads on pikes, right, I'd put them at the two corners of the White House as a warning to federal bureaucrats, you either get with the program or you're gone."

#US: Trump loyalist and criminal Steve Bannon declares Dr. Fauci and FBI Director Wray should be beheaded and have their heads mounted on pikes at the White House "as a warning to federal bureaucrats".

​The former presidential advisor's remarks prompted an intense backlash on social media, with users suggesting he has to be arrested for "inciting violence" and "threatening domestic terrorism on government officials".

Both Wray and Fauci are not known to be favoured by Trump. The FBI director drew POTUS' ire after alleging that the Trump campaign colluded with Russia during the 2016 presidential election and later denied any possibility of voter fraud that Trump has been concerned about in the months before November election.

Fauci has repeatedly challenged Trump's coronavirus pandemic rhetoric, contradicting the president's statements regarding the spread of COVID-19 and possible treatments for the disease.

A former White House advisor and a devoted Trump supporter, Bannon was indicted in August for conspiracy to commit wire fraud and money laundering - something for which he has pled not guilty.