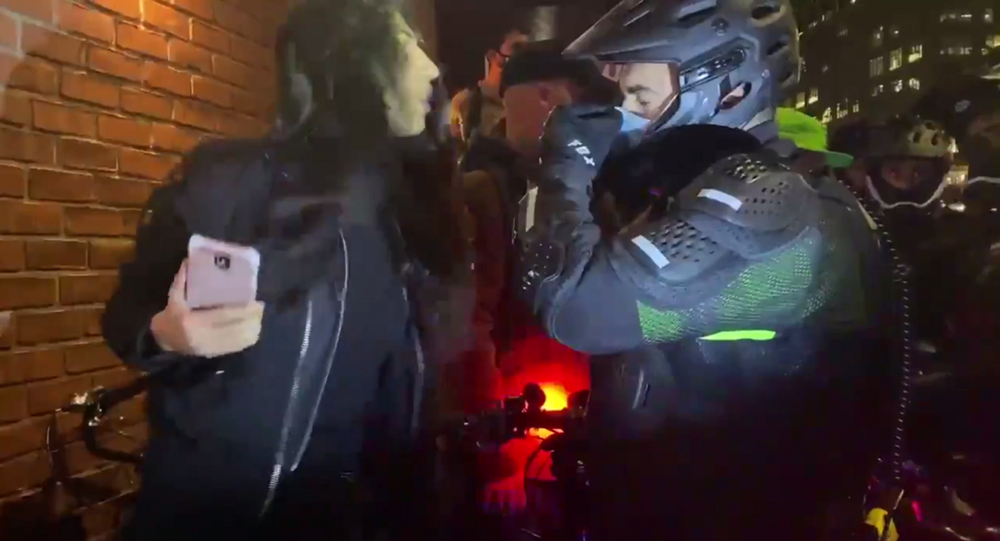 On late Wednesday, the New York City Police Department made dozens of arrests among participants of a “Count Every Vote” demonstration that took place in the city. The department charged at least 57 protesters with various counts, including a woman who was charged with spitting in an NYPD sergeant’s face.

Devina Singh, a US woman arrested and charged earlier on Wednesday over spitting in the face of a New York City Police Department sergeant during a “Count Every Vote” protest in the West Village neighborhood of the borough of Manhattan, justified her behaviour as a reaction to police “attacking people”.

Singh, who was later released by a New York court and given a desk appearance ticket, gave her story in a statement to The New York Post.

“They hit us with their bikes repeatedly […] and started attacking people,” she told the publication by phone, following her release.

In a video of the incident shared on social media, however, the suspect appears to have verbally insulted the NYPD sergeant before spitting into his face.

A young woman was arrested after she spat in an officer’s face after screaming, “F–k you, fascist,” tonight in the West Village. pic.twitter.com/cfgVLYJ5pc

Retweeting a video of the incident, the NYPD denounced the woman's behaviour, noting that such actions against law enforcement officers “will not be tolerated”.

“Actions like this will not be tolerated,” the New York Police Department said. “Agitators who commit these acts will be arrested.”

Actions like this will not be tolerated. Agitators who commit these acts will be arrested. https://t.co/oxew6gYNCI

On late Wednesday, one day following the 2020 presidential election in the United States, New York police charged over 57 protesters with crimes in the wake of a “Count Every Vote” demonstration that took place in the city. The list of suspects included two people who allegedly punched police officers, as well Singh.

The Count Every Vote demonstration was reportedly triggered by US President Donald Trump’s Wednesday request to stop counting ballots received by mail after Election Day by claiming that those votes are not legal. The Trump re-election campaign is currently challenging counting those votes in court, as the nation awaits the final results of the 3 November race.

At the present time, Democratic candidate and former US Vice President Joe Biden is leading the Republican president in the popular vote by over 3.5 million votes, as well as leading in electoral votes. Biden has 264 out of the 270 electoral votes needed to secure a White House win, while Trump has only 214 votes. The eyes of the nation are looking toward a handful of uncalled states that are expected to decide who will be the country’s new president.