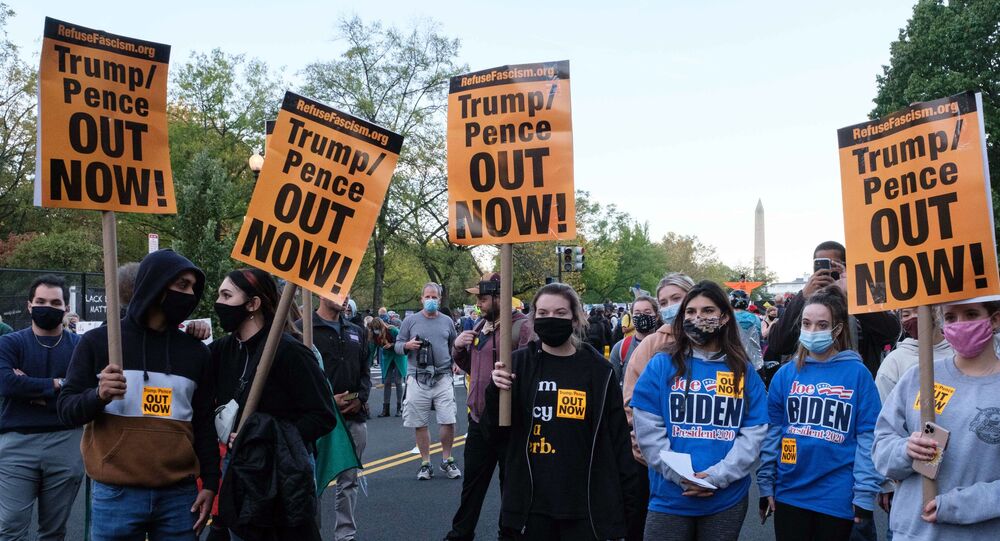 Protests have broken out across US cities in the aftermath of a contentious presidential election where a clear winner has yet to be determined. Donald Trump’s campaign has mounted legal challenges over alleged irregularities in multiple battleground states. Challenger Joe Biden has announced the creation of an ‘election protection’ legal fund.

Black Lives Matter activists and allied Democrat-leaning protest groups have begun a mass mobilisation across major cities to ensure that the counting of votes continues, and have threatened to continue protests outside the White House and elsewhere unless the Trump campaign halts its planned legal challenges in states where voting irregularities have been suspected.

BLM and a group known as ‘Count Every Vote’ has called on Trump to concede defeat, staging rallies Wednesday in major cities including Washington, DC, New York, Chicago, Philadelphia,  Pittsburgh, Minneapolis, Seattle, Houston, Los Angeles, San Diego, and Seattle, demanding that the count of mail-in ballots continues unabated. In Portland, the city which has witnessed widespread protests since the summer, a riot was declared, prompting Oregon authorities to activate the National Guard.

Protests Promised Until a New Government Sworn In

Shut Down DC, a protest group created in 2019, and which has the self-described goal of “making plans to rise up to confront the Trump administration’s attacks on democracy,” is calling on protesters in the capital to gather at Black Lives Matter Plaza across from the White House, and is urging them to “keep showing up and keep supporting each other until the people swear in a new government">

A separate group known as the Sunrise Movement made plans for Trump’s overthrow before the election even took place, with a since deleted video of a purported leaked Zoom call by organisers encouraging protesters to “shut down the White House,” and publishing a “target map” including key government buildings, media outlets, police stations.

ShutDown DC, Sunrise Movement, BLM, discuss their plans to disrupt the 2020 election. They plan to shut down D.C. and other major cities taking over federal buildings, a siege on the White House, intercepting representatives and senators to shut down...https://t.co/T5VnNHUlBr

Suggesting that they were “facing and an administration and a potential coup and a political insurrection,” ‘protest consultant’ Lisa Fithian told organizers that in the event of a crisis, the goal was “to make sure it’s one that we are creating. We want them to be responding to us and us not responding to them. In a situation of a coup or an insurrection or an uprising, whoever’s got the guns, often can win. We should be clear. Trump’s gotta go,” Fithian added.

Sputnik Screenshot
Protesters march in Washington, DC, on November 4, 2020, against US President Donald Trump's premature declaration of victory in the US presidential election the day prior

Over 100 events have been planned between Wednesday night and Saturday by more than 165 grassroots organizations, unions and advocacy groups across the country.

Election Battle Heading to the Courts

The spate of protests began on election night, after the Trump campaign indicated that the incumbent was on track to a second term.

.....there was a large number of secretly dumped ballots as has been widely reported!

The Trump campaign filed election-related lawsuits Wednesday in Pennsylvania, Michigan and Georgia. According to the AP, the new filings seek to ensure access for campaign observers at vote counting and processing locations, and express concerns related to absentee ballots. In Pennsylvania, the Trump campaign is looking to challenge the Supreme Court’s decision to allow for ballots received as many as three days after the election to be counted.

© REUTERS / RACHEL WISNIEWSKI
'Sketchy': USPS Staff in Michigan Were Told Late Ballots Would be 'Handstamped' With 'Nov 3', Insider Claims
Before the election, Trump and his staff vigorously complained about mail-in ballots, claiming they were rife for fraud because they were not as closely supervised by election officials, allegedly making them easier to steal, forge or otherwise alter. Trump’s Democratic opponents have dismissed these concerns, and have released strategies on how to force the president out of office if he refuses to concede. As many as 100 million Americans voted by mail in 2020, according to the US Elections Project.

On Wednesday, Biden announced the creation of an ‘election protection’ fund to counter Trump’s legal challenges in the courts, and uged supporters to contribute.