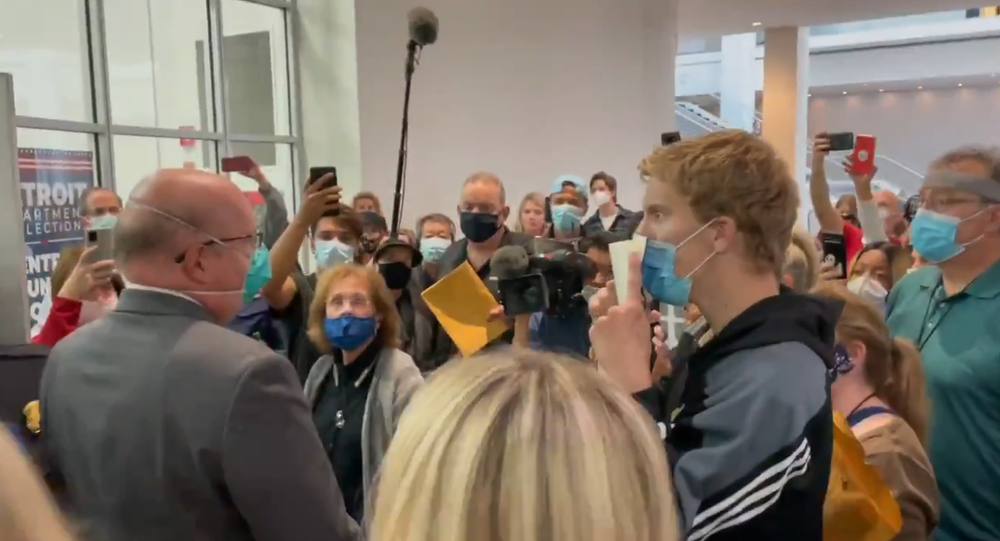 WASHINGTON (Sputnik) - Alleged supporters of Donald Trump tried to push their way into a voting center in Detroit, Michigan, to prevent ballots from Tuesday’s US election from being tallied, after the president declared that he would sue to stop vote counts in those states where Democratic candidate Joe Biden is leading.

"Stop the count… stop the count," shouted alleged Trump supporters as they chanted on videos posted to Twitter on Wednesday.

One clip showed a large, animated group trying to push its way into a hall in Detroit where ballots were being counted. Guards successfully blocked the door.

In one other video, election workers inside the hall were seen stacking up pizza boxes against a window to obstruct the view. In another, workers were seen putting up large white boards.

Group of ppl shouting “stop the count”, some banging on windows of TCF absentee ballot counting board in #Detroit pic.twitter.com/vTqP6ba2bp

#BREAKING: Large, animated crush of “stop the count” protestors trying to push their way into TCF hall in #Detroit where ballots are being counted.

They’re being blocked by guards at the door.

​Trump on Wednesday tweeted that he was "winning big" in Pennsylvania, another key swing state, although election commission officials said there were millions of additional ballots yet to be counted. On election night, Trump tweeted that "votes cannot be cast after the polls are closed".

Later on Wednesday, the Trump campaign announced lawsuits to stop ballot counting in Michigan and Pennsylvania, saying that Republican observers were being denied access to counting locations.