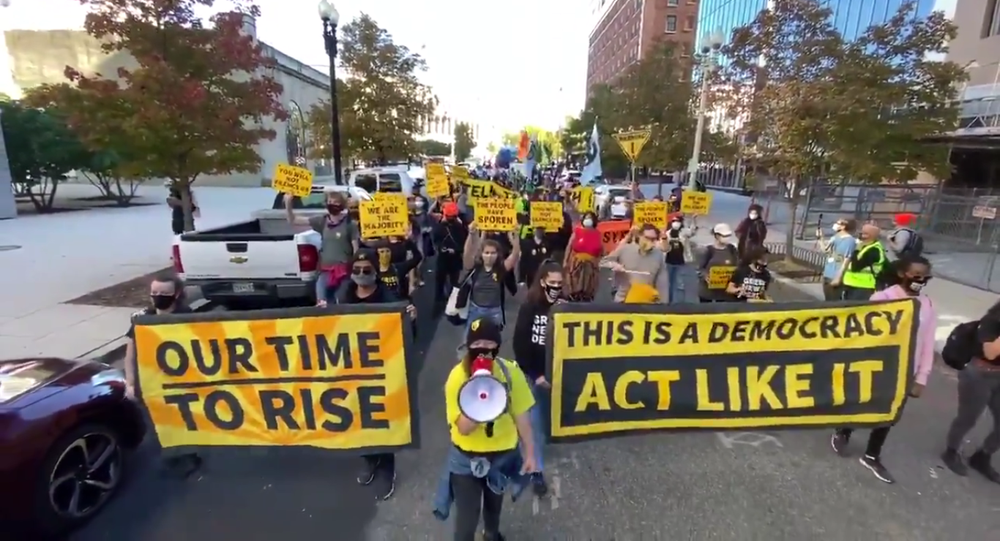 With US President Donald Trump declaring a premature victory in the Tuesday election, people across the United States are taking to the streets to pressure election officials to continue counting votes and to oppose any attempted power grab.

The winner in most US states was apparent by late Tuesday evening, but in several key battleground states, the race between Trump and Democratic candidate Joe Biden is very close. Ballot-counting is continuing in many states for up to 10 days after the election as mail-in ballots, absentee ballots and reports from far-flung districts continue to trickle in.

“We are up BIG, but they are trying to STEAL the Election. We will never let them do it. Votes cannot be cast after the Polls are closed!” Trump tweeted shortly after midnight on Wednesday, adding later in the morning, “They are finding Biden votes all over the place - in Pennsylvania, Wisconsin, and Michigan. So bad for our Country!”

Fears Trump would refuse to accept the results and concede to a peaceful transfer of power should he lose the election have swirled in the weeks prior to the vote. “We’re going to have to see what happens,” he told a reporter at the White House in September.

Across the United States, more than 130 advocacy groups, labor unions and political organizations across the country have prepared a “Protect the Results” coalition to demand the vote-counting continue and the final results be respected. They have called for protests at more than 500 locations.

“We expected Trump and Republicans to try every trick in the book to cling to power,” Indivisible, a progressive group formed in 2016 in response to Trump’s ascension to the presidency, tweeted on Wednesday. “That’s why we’re ready to mobilize. Join the movement to stop a constitutional crisis.”

One of the first protests to pop up, in Washington, DC, gathered at Columbus Circle near the US Capitol Building on Wednesday morning. The local Democratic Socialists of America chapter carried banners reading “Demand Democracy” and “Count Every Vote.” They were joined by other groups, such as climate justice advocacy group Extinction Rebellion.

We are here with the @ShutDown_DC coalition to demand democracy and for every vote to be counted. #CountEveryVote pic.twitter.com/lujsG7yY25

#NOW: Climate activists are leading another day of protests in D.C. with results still murky. They saw Trump’s remarks on halting the count as an effort to steal the election, so they’re on Capitol Hill challenging the “extinction profiteers who got us into our current mess.” pic.twitter.com/cgIUeqbTtp

​In Philadelphia, where vote-counting continues and no state winner has been declared, protesters brought massive banners reading “vote him out.”

​However, many other protests are scheduled for later in the day.

For months, Trump has postured against accepting states’ vote counts after Tuesday, saying that counting ballots for days after the election is a situation ripe for corruption and vote-rigging.

According to the US Elections Project, more than 100 million Americans voted early, whether through mail-in ballots or by going to the polls on one of several early-voting days prior to Election Day, while another 60 million voted in-person on Election Day, according to CNBC. The total far exceeds the 2016 record of 136.6 million participants.

The country’s Electoral College, an institution created by the US Constitution to give extra power to the southern slaveholding states, awards a set of electoral votes based on a winner-take-all basis, with each state’s total votes being decided based on population. So far, neither candidate has attained the necessary 270 electoral votes to be declared winner.