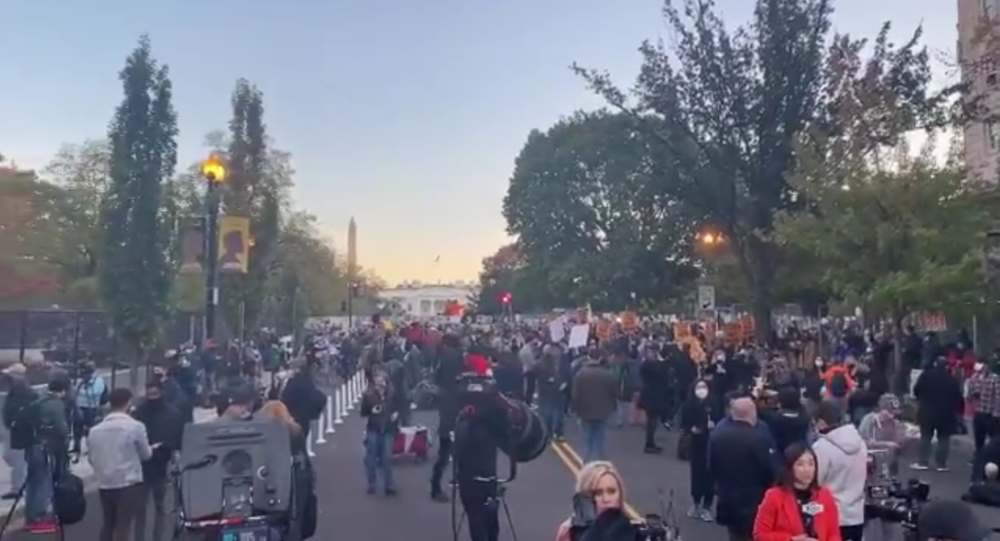 Preliminary results from the US national elections won’t begin to be announced for several hours, but a crowd has already gathered outside the White House in Washington, DC, which has been fortified ahead of the vote.

Performers danced, speakers boomed with music, and preachers spread the religious word at Black Lives Matter Plaza on the District of Columbia’s 16th Street NW on Tuesday afternoon as the protest site began to rapidly fill with demonstrators.

Black Lives Matter Plaza filing up quick as Election Day in DC slowly draws to a close. Can see through the tight fence security forces with flak jackets in pairs holding across parts of Lafayette Park. All is calm as of now. #Election2020 pic.twitter.com/RaaQUfW0VG

4:32pm on Black Lives Matter Plaza, in front of the White House. pic.twitter.com/D7GBuYpwVT

A large section of downtown DC has been closed to vehicular traffic for two days amid widespread expectation of mass demonstrations. Likewise, the White House has erected “non-scalable” steel fences around the entire perimeter similar to those put up during the militant demonstrations that erupted in May and June, and some area shops have boarded up their windows.

The fence around Lafayette Park, which sits between the White House and Black Lives Matter Plaza, has remained intact since those protests, erected in the days following US President Donald Trump’s violent eviction of peaceful protesters from the public park.

Still a few hours before polls start to close but crowd outside Lafayette Park near WH is growing pic.twitter.com/npzsWVqiml

​According to the New York Times, the first polls in the US’ Eastern Time Zone will begin closing at 6 p.m. local time, while some polls on the nation’s Pacific coast, three hours behind the Atlantic side, won’t close until 11 p.m. local time - by which time it will be 2 a.m. in Washington, DC.

"We are not on any standby status; however, we continue to stand ready should a request [be] approved," Capt. Tinashe Machona, a spokesperson for the DC Guard, told Military.com on Tuesday.

“The city has indicated that they are not expecting to have any protest or violence or any kind of incidents in the city,” Leona Agouritis, the executive director of the Golden Triangle Business Improvement District that operates much of the capital city’s downtown area, including Black Lives Matter Plaza, told WTOP last week.