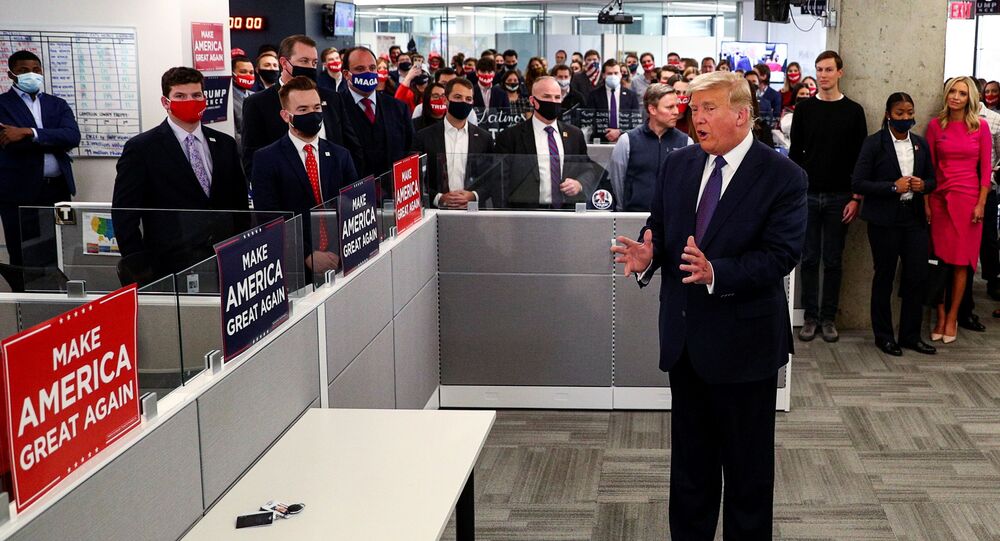 Americans are heading to the polls Tuesday for presidential and congressional elections, with over 99 million people thought to have voted early via mail-in ballots, according to the US Elections Project.

President Donald Trump has provided supporters with an update on his assessment of the state of the presidential race, saying he has been hearing good news from a number of swing states.

Pointing to lines in some "Trump areas" extending "for miles," the president said he expected to have a great night, "but it's politics and its elections and you never know."

"I think you're gonna see some tremendous results. We had rallies - there was love at those rallies. There's never been rallies like that - there has never been and I say that in front of the media and they can check it, they can 'fact-check' it if they want, but there's never been anything like what we just had. And I think a combination of the debates...and the rallies, it was a good combination and we really, I think we took off," Trump added.

Asked what message he has for Americans on election day, Trump said that "everybody should come together, and I think success brings us together." Pointing to what he said was strong GDP growth before the US was hit by "the China virus" and praising his administration's response to the pandemic, the president chided the media for refusing to recognize his administration's alleged successes. "I'm not sure that it's possible to convince you of it, because you people [in the media] were not convincable no matter what we did," he complained.

Trump said he thought the country could "possibly" learn the results of the election by Tuesday night, "depending on the extent of our victory."

Commenting on the Supreme Court's recent ruling to allow for an extended count of Pennsylvania mail-in ballots postmarked by Election Day, Trump called the court's decision a "dangerous" and "unfortunate one...because I think we should know what happens on the night."

Over 99 million of America's estimated 233.7 million eligible voters have already cast their votes early by mail, according to US Elections Project data. State authorities in charge of voting have established varying standards for when to start counting votes, and many states are not expected to have complete results on election night, even once early and in-person ballots are counted. The widespread use of mail-in ballots in 2020 due to the coronavirus pandemic has sparked fears that either President Trump or his Democratic challenger Joe Biden may contest the results based on any major discrepancies between mail-in and in-person voting.