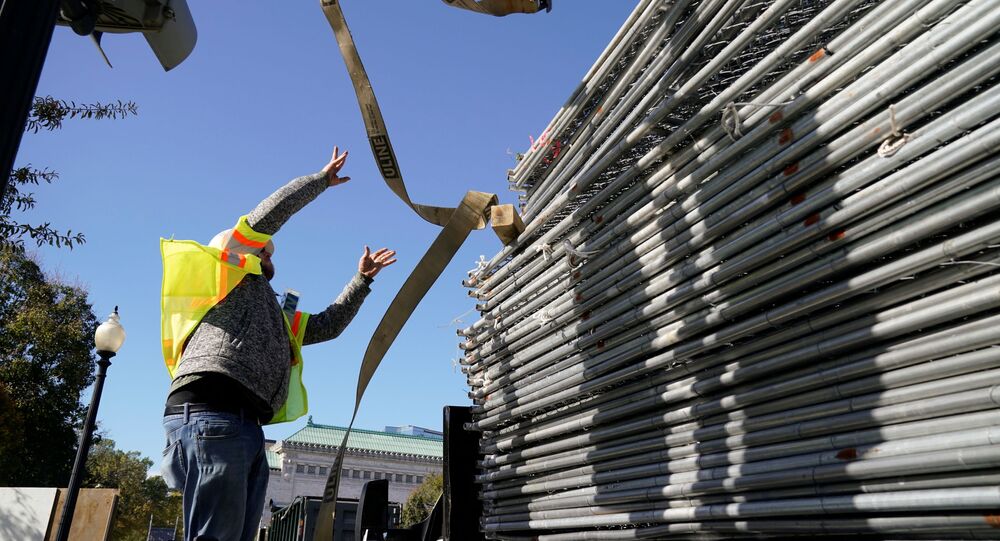 Amid fears of social unrest in the aftermath of US elections on November 3, businesses in many cities are boarding up windows, even as some business leaders urge calm. The White House has also fortified itself, erecting the “non-scalable” fence seen in response to mass protests earlier this year.

Boards, Fences Go Up Prior to Vote

Around the White House, a new steel fence is being put up like that erected in June amid the nationwide Black Lives Matter protests that rocked the country in the wake of the police killing of George Floyd, a 46-year-old Black man in Minneapolis, Minnesota. Washington, DC, saw huge demonstrations, some of which destroyed shop windows and set fires, after which the DC government and US President Donald Trump dispatched thousands of national guardsmen and federal police to crush the protests.

© REUTERS / Erin Scott
Workers move a stack of fencing near a security checkpoint on the South side of the White House, the day before the U.S. presidential election, in Washington, U.S., November 2, 2020.

Most of the black steel fence was taken down in mid-June, but elements remain around Lafayette Park, a public square across the street from the White House that was a common site for expressions of political dissent across the spectrum before Trump had the park violently cleared on the evening of June 2 in preparation for a photo op by a local church.

You can’t see it from this picture but that’s just the first of three layers of fence between the edge of Lafayette Park and the White House. Unprecedented. pic.twitter.com/j1YWF39I75

​According to NBC, the new fence will encompass the same area fortified in June, including the White House grounds and Ellipse and incorporating the fence around Lafayette Park.

Washington’s Metropolitan Police Department told NBC on Sunday that 250 guardsmen were on standby in case they are needed after the election.

In another disturbing echo of the June military deployment, helicopters have been spotted making very low passes around downtown, where airspace is closed to all but police and military aircraft.

Something is always happening in DC - but the choppers aren’t always flying this low. And if you don’t know - the entire area is restricted air space. So these are police/government helicopters @nbcwashington pic.twitter.com/SE36Fw9fpK

​However, one such chopper spotted Monday was likely a radiation “sniffer” helicopter operated by the US Department of Energy, which has been monitoring background radiation in the city for weeks. Its flight path on Monday resembled a grid, zigzagging across the city at barely 100 feet above the ground.

Shops in US Capital Board Up

some snapshots of dc boarding up: pic.twitter.com/0K7SKgdmAh

This is what we have become under trump. Boarding up DC & Maryland in preparation for violence and destruction. PLEASE vote! #VoteBidenHarrisToSaveAmerica pic.twitter.com/zunE8kXLUl

A recent report by the non-governmental crisis mapping organization Armed Conflict Location and Event Data Project (ACLED) and research group MilitiaWatch concluded that Pennsylvania, Georgia, Michigan, Wisconsin and Oregon face the highest risk of violence by right-wing groups in the aftermath of the US elections, while North Carolina, Texas, Virginia, California and New Mexico face a more moderate risk.

“Ahead of the election, right-wing militia activity has been dominated by reactions to recent social justice activism like the Black Lives Matter movement, public health restrictions due to the ongoing coronavirus pandemic, and other perceived threats to the ‘liberty’ and ‘freedoms’ of these groups,” the October 21 report notes, warning that the typically highly competitive groups have “coalesced around this period of heightened political tension, and have even brought Proud Boys and QAnon-linked groups into the fold. While some groups have indicated that they are receptive to calls for deescalation and conflict avoidance, they remain vulnerable to hardline elements that may work clandestinely towards violent action aimed at dominating public space around the election.”

Fears of violence, especially in the case of widespread voting issues or an extremely close vote result, have only been fanned by Trump’s continued waffling on a commitment to a peaceful transfer of power if she should lose.

“We're going to have to see what happens,” Trump told a White House reporter in late September. He also told the right-wing, pro-Trump gang Proud Boys to “stand by” when prompted during a debate with Democratic rival Joe Biden to denounce white supremacist groups. Amid widespread backlash following the debate, Trump denied any knowledge of the Proud Boys, telling them to “stand down and let law enforcement do their work.”

However, business leaders have warned shops putting up boards not to alienate their customers.

Leona Agouritis, the executive director of the Golden Triangle Business Improvement District that operates much of the capital city’s downtown area, told WTOP on Monday, “The city has indicated that they are not expecting to have any protest or violence or any kind of incidents in the city based on what they know at this point. At least that’s what they have told us. They are not recommending that people board up based on the information they have right now.”

Likewise, Stephanie Martz, general counsel of the National Retail Federation, cautioned during a recent video conference featuring dozens of brands that boarding up shop prematurely could alienate people. "You are sending a message when you do that. You don't want to necessarily engage in this kind of grim forecasting,” she said, according to United Press International.