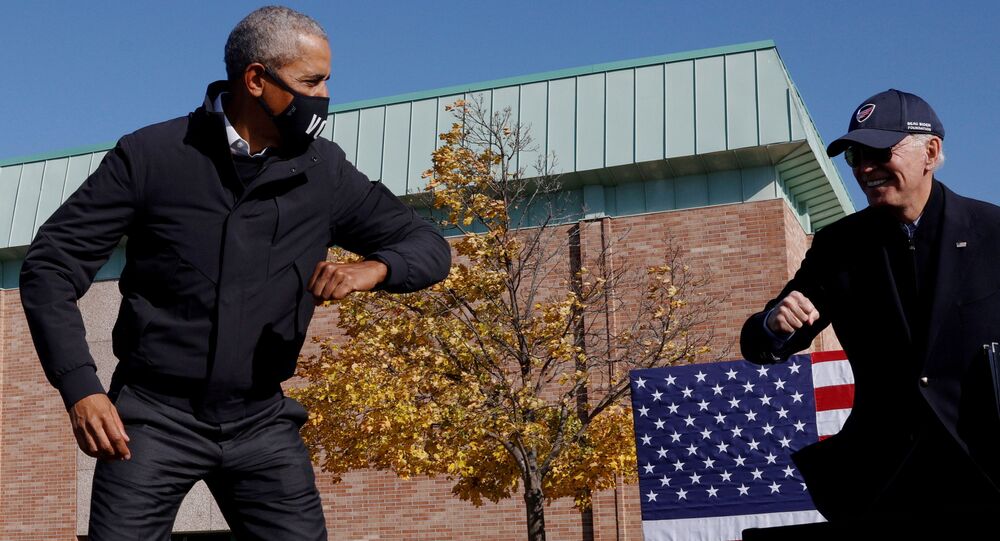 Democrat presidential candidate Joe Biden has been ridiculed for dozens of public gaffes during his campaign, including forgetting what day it was, where he was speaking, and even what office he was running for.

US Democratic presidential candidate Joe Biden has had another 'senior moment' - this time missing his cue for a rally speech three times.

Former president Barack Obama, the warm-up act at Saturday's rally in Flint, Michigan, had to call his old running-mate's name three times before Biden realised he was meant to come out and speak.

As the awkward seconds ticked by, Obama tried to work up the small crowd at the socially-distanced drive-in rally, shouting: "Honk if you're ready!" - and got little response.

Once he Biden repeatedly garbled the words in his speech, saying: “Barack and I think it’s a right for people to have badakathcare”, instead of healthcare.

Biden's campaign has been marked by numerous public speaking gaffes, including forgetting what day it was, where he was speaking, who the president of China was and even what office he was running for - more than once.

And at a rally in his home state Pennsylvania earlier last week, the former vice-president vowed to "lead an effective strategy to mobilise trunalimunumaprzure," leaving the audience and even his sign language interpreter baffled.

On CBS News' 60 Minutes on Sunday October 25, Biden forgot who he was running against, seemingly thinking it was 2004 and George W Bush was still president, and John Kerry wasn't the Democrat candidate... He had to be prompted by his wife Jill to remember President Donald Trump's name.

​Trump seized on that one to get a laugh at rallies in Pennsylvania and elsewhere the next day.

And ​just a few days before that, Biden said the Democrats put together a huge "voter fraud organisation ".

© AP Photo / Carolyn Kaster
Joe Average: Biden’s Top 5 Gaffes to Date
On October 12 Biden forgot the name of 2012 Republican candidate Mitt Romney, who Obama and he beat, calling him "the senator who was a Mormon... the governor, OK?"

​In Toledo, Ohio the same day, Biden insisted: “I’m running as a proud Democrat for the Senate”.

‘You Can’t Do These Things’: Trump Hits Out at Biden Over ‘Super Thursday’ Gaffe