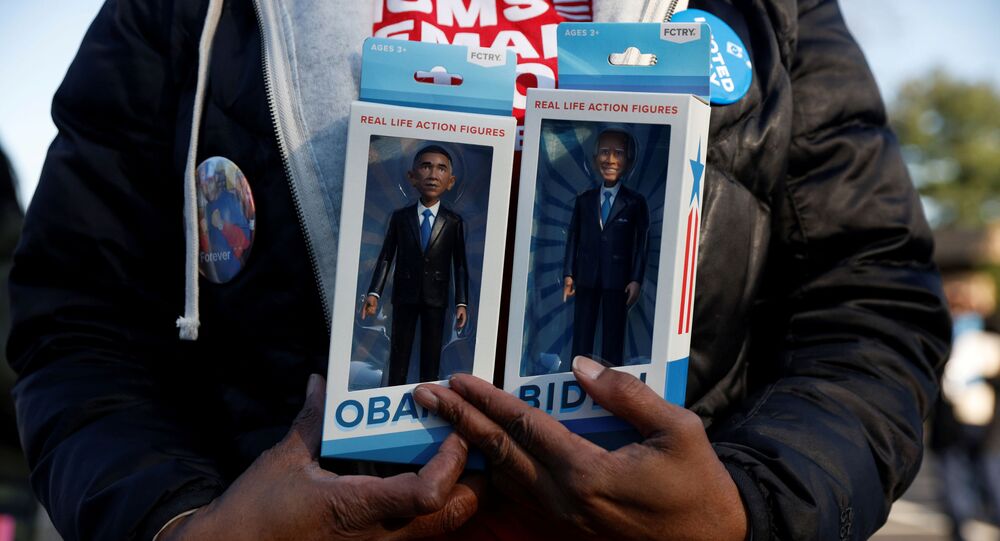 The two made a stop in Flint first before heading for Detroit, where Obama again blasted Donald Trump for his response to the COVID-19 pandemic and said how "better" the Joe Biden and Kamala Harris tandem would be for America compared to the president.

Former US President Barack Obama and Democratic presidential candidate Joe Biden appeared at their first joint campaign event in the battleground state of Michigan on Saturday, ahead of the looming presidential election.

During a stop in Michigan, Obama voiced support for Biden, who previously served as the vice president in his administration.

"Joe Biden is my brother. I love Joe Biden. And he will be a great president", Obama said, adding that Biden treated everyone with "dignity and respect" and that he "made me a better president".

Biden also shared his sympathies with Obama, calling him a "great president of the United States of America".

Obama also went on to compare Biden and Democratic vice-president candidate Kamala Harris with Trump, saying that they won't be so "exhausting" for Americans like Trump, hinting at the president's every day updates and sharing his opinion on Twitter.  He said Trump "cares about feeding his ego", while "Joe cares about keeping you and your family safe".

Obama and Michelle discussed this benefit of a Biden presidency:

“You’re not going to have to think about them everyday … You’ll be able to get on with your lives knowing that the president is not going to suggest we inject bleach …” pic.twitter.com/JnFPaeBhal

Biden slammed Trump for saying that doctors are taking economic advantage of the pandemic, saying that he believes that because "he doesn't do anything other than for money".

Following the speech in Flint, Trump took to Twitter to criticise both Obama and Biden for their failed policies in Flint (referring to the Flint water crisis) and for endorsing Rick Snyder, who, according to the president, was an incompetent Michigan governor.

Biden & Obama owe a massive apology to the People of Flint. The water was poisoned on their watch. Not only did they fail them, Biden proudly accepted the endorsement of disastrous Gov Rick Snyder! Unlike Biden, I will always stand with the People of the Great State of MICHIGAN!

Obama, who has been one of the most active and vocal supporters of Biden, has been against President Trump on a variety of issues, but since the start of the coronavirus pandemic, his criticism, to a large extent, have concerned Trump's handling of the virus. The former US president has recently accused Trump of being "jealous" of the COVID's media coverage and has claimed his administration's efforts to fight coronavirus are "an absolute chaotic disaster".