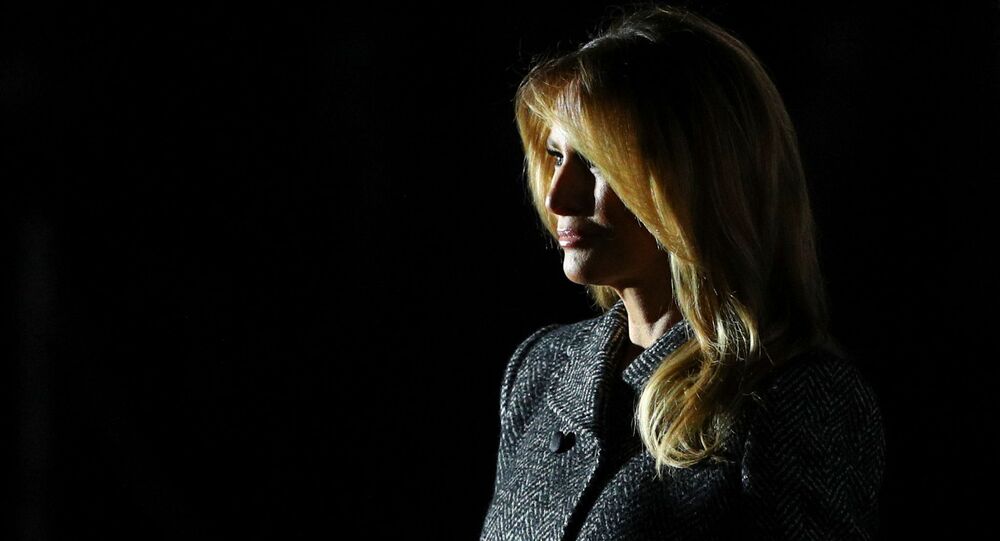 'Name One Thing Melania Has Done to Help Americans': Ex-Aide Slams FLOTUS for Being 'Hypocritical'

Earlier this month, Melania Trump hit out at Stephanie Winston Wolkoff, describing her former aide and friend as a person of "dishonest behaviour" who the US First Lady said "only cares" about her "personal agenda".

In an exclusive interview with the Daily Mail, Melania Trump's former friend and adviser Stephanie Winston Wolkoff has reproached the US First Lady for what the former Vogue staffer described as hypocrisy and bullying.

Wolkoff specifically referred to President Donald Trump's spouse taking a jab at her during FLOTUS' campaign speech in Pennsylvania on Tuesday night.

"Melania [had] the opportunity to actually say something of value and importance to the American people, and instead she's bullying me", Wolkoff claimed, accusing the US First Lady of using her as "a pawn in the administration's cover-up for the presidential inauguration financing scandal".

She argued that even though Melania's Be Best initiative aimed at helping children is "all about kindness and anti-bullying", the US First Lady "continues to attack" Wolkoff, allegedly because "for her [Melania] to even utter the words of kindness and respect is hypocritical".

"The fact that she says she cares about children, what has she done for children? Nothing. COVID, what has she done? She wears a mask on a public service announcement and then she goes to a school the next day without one. Melania's entire being is now in line and in step with Donald and the West Wing and that's who she is", Wolkoff added.

She then wondered whether anyone could "name one thing Melania has done to help Americans", adding, "she does not care; she said it herself when she wore her jacket with the words I don't care, do you?"

In June 2018, FLOTUS wore a designer khaki jacket with a print on the back reading: "I really don't care, do u?" as she boarded a flight to Texas where she was scheduled to visit a detention camp for immigrant children. In a subsequent interview with ABC News, the Slovenian-born former model insisted that "it's obvious I didn't wear the jacket for the children" and that she "wore the jacket to go on the plane and off the plane".

Touching upon her job in the White House, Wolkoff said that she "would have done anything for" FLOTUS, describing herself as a person who "didn't know the divisiveness and the deceit".

In conclusion, the former Vogue staffer admitted that she didn't expect she would get sued by the Department of Justice.

"It's aggressive and hurtful. I have spent so much time and money. It's literally taken over my life. I live and breathe lawyers and subpoenas because of them", Wolkoff stressed.

FLOTUS Scolds Media for Focusing on 'Salacious Claims' by Wolkoff

She spoke after the US First Lady accused the mainstream media of concentrating on stories with "baseless claims" from angry ex-employees who are "only trying to distract from the important work happening inside the White House".

"The media has chosen to focus on stories of idle gossip and palace intrigue by editorialising real events and policies with their own bias and agendas", Melania Trump said during her campaign speech in Pennsylvania on Tuesday.

The speech echoed FLOTUS berating the media earlier this month for "eagerly" covering "salacious claims made by a former contractor who advised my office".

In a piece published on the White House website at the time, Melania dubbed Wolkoff a person of "dishonest behaviour" who "only cares" about her "personal agenda" and who "clung" to FLOTUS after Donald Trump won the presidency in 2016.

© AP Photo / Jacquelyn Martin
‘Body Double’ Conspiracy Theories Run Wild Over Photo of Grinning Melania Trump
The remarks come a few days after the US Justice Department lodged a lawsuit against Wolkoff, claiming that she had violated a nondisclosure agreement by publishing a tell-all memoir about her time working at the White House and that she should hand over all of her book's profits to a government trust.

The memoir titled "Melania and Me: The Rise and Fall of My Friendship with The First Lady" was released in September and focused, in particular, on Wolkoff planning President Donald Trump's 2017 inauguration and advising Melania in the first year of the Trump administration.

The US First Lady's aide left the White House in 2018 after reports claimed that Wolkoff's company had been paid almost $26 million for her work on Trump's inauguration.