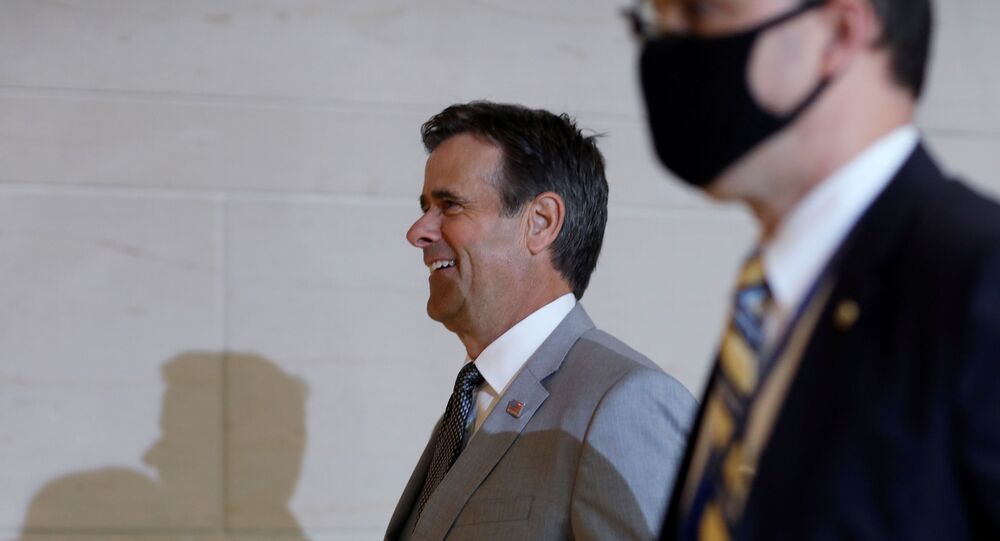 A senior intelligence official reportedly explained that DNI Ratcliffe's remarks were being edited "until mere moments before he went on stage".

According to the media outlet, although Ratcliffe claimed that Iran was sending "spoofed emails designed to intimidate voters, incite social unrest and damage" US President Donald Trump, the reference to the POTUS was not present in the director's prepared remarks, "as shown to and signed off by FBI Director Christopher Wray and senior Department of Homeland Security official Chris Krebs, the director of the department’s Cybersecurity and Infrastructure Agency".

Both Wray and Krebs, who stood behind Ratcliffe as he made his address, were surprised by his "political aside", the officials said.

Another instance of the DNI going off script apparently involved his omitting any reference to the right-wing group Proud Boys which was "named in his prepared remarks", as hackers allegedly posed as members of that group in their "intimidating emails".

As one senior intelligence official reportedly explained, Ratcliffe’s remarks were being edited "until mere moments before he went on stage" and "the broad strokes were shared with agencies who had equities in the press conference to make sure everyone was on the same page".

The media outlet also notes that although the DHS did not immediately respond to a request for comment, “officials at the FBI and CISA referred questions to the office of the DNI”.

"Literally no one is disputing the 100 per cent factual accuracy of the DNI’s remarks," assistant DNI for strategic communications Amanda Schoch said. "The rest of this is just pointless process noise, most of which is inaccurate or taken out of context."

She also stated that "what the DNI made clear last week is that Iran is executing activities to influence the US election", and that the intelligence community "has not changed our assessment on Iran’s intent".