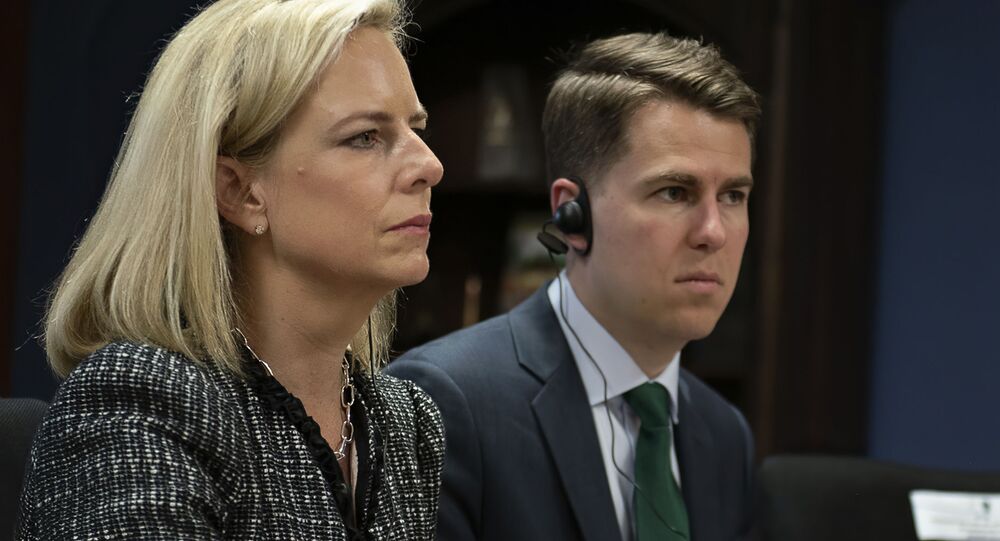 Who Is Miles Taylor, Alleged Author of the Trump Tell-All Book ‘A Warning’?

Miles Taylor revealed on Wednesday that he was the anonymous author of a New York Times essay in 2018 and a subsequent tell-all book titled “A Warning,” that slammed US President Donald Trump’s “erratic behaviour” and “amorality”.

“Who is Miles Taylor?” This has been a recurring phrase since Donald Trump tweeted it in the wake of yesterday’s revelation that a former top official at the US Department of Homeland Security (DHS), lifelong Republican Miles Taylor was the anonymous author of a New York Times Op-ED article in 2018 that denounced the current US President’s alleged “erratic behaviour”.

Who is Miles Taylor? Said he was “anonymous”, but I don’t know him - never even heard of him. Just another @nytimes SCAM - he worked in conjunction with them. Also worked for Big Tech’s @Google. Now works for Fake News @CNN. They should fire, shame, and punish everybody....

​After his open letter to the American public, where the current CNN correspondent suggests that Donald Trump has been “exactly what we conservatives always said government should NOT be: expansive, wasteful, arbitrary, unpredictable, and prone to abuses of power”, the US president was swift to weigh in.

Trump claimed that he did not know the former DHS official and had “never even heard of him”, despite noting Taylor’s former employment at Google and current job at CNN.

That’s too bad. I remember you, all too well. And I will continue shining a light on your failed presidency through the election—and beyond. https://t.co/ARzUQ9oss2 pic.twitter.com/JEgBCxdSss

​So, who is the man who claims to have penned the Trump tell-all “A Warning”?

The professed author of “a character study of the current Commander-in-Chief and a caution to voters that it wasn’t as bad as it looked inside the Trump Administration - it was worse,” is a lifelong Republican.

However, his service as a senior Department of Homeland Security official in the Trump administration reportedly drove him to endorse the Democratic nominee for president, former vice president Joe Biden, writes The New York Times.

In his position of chief of staff to Kirstjen Nielsen, Donald Trump’s third DHS secretary, Taylor, 33, was one of the most senior political officials in the department.

His role of chief adviser to Nielsen necessitated his frequent presence at meetings with top White House officials, on occasion with President Trump.

Accordingly, he was privy to decision-making on a broad plethora of topics, ranging from immigration and border security to cybersecurity and terrorism. His work granted Taylor access to meetings both in the DHS and with other agencies.

Miles Taylor graduated from Indiana University and studied international relations at the University of Oxford, says the outlet.

He began his career on Capitol Hill, working as a staff member on the House Appropriations Committee. He later took on the role of senior aide to Republican lawmakers tackling national security issues.

Taylor served as a national security adviser to Representative Michael McCaul, Republican of Texas, who was the chairman of the House Committee on Homeland Security.

While on the committee, Taylor was a leading contributor to the 2015 task force report on combating terrorist and foreign fighter travel.

In 2017, Miles Taylor joined the Department of Homeland Security as a senior adviser under agency secretary John F. Kelly, with Nielsen as his chief of staff. After Kelly took on the White House chief of staff position, he was succeeded by Kirstjen Nielsen, with Taylor becoming the deputy chief of staff. He was subsequently promoted to the top position in the DHS.

In April 2019,  Kirstjen Nielsen resigned from his role as Homeland Security secretary, with Taylor becoming chief of staff to Kevin K. McAleenan, the acting secretary of the department.

He resigned from that position in June 2019.

At the end of 2019 Google hired Miles Taylor as its head of national security policy engagement.

Despite fending off criticism from some within the firm for his role in the administration, where Nielsen reportedly helped enable the separation of migrant children from their families at the border, the Google bosses promoted him to head their advanced technology and security strategy.

Ahead of the US presidential election, this summer Miles Taylor took a leave of absence from Google, ostensibly to speak publicly about his concerns regarding a possible reelection of Donald Trump and to campaign for Joe Biden.

Amid fierce speculation about the identity of “Anonymous”, with readers scrutinising passages in The New York Times Op-Ed essay and the book, “A Warning” in search of clues as to who must have written them, Taylor had denied speculations that he might be the author.

In a CNN interview on 21 August, Anderson Cooper asked Taylor if he was the anonymous author.

“I wear a mask for two things, Anderson, Halloween and pandemics. So no,” quipped Taylor.

White House press secretary Kayleigh McEnany went on Twitter on Wednesday to claim that the CNN interview was evidence that Taylor “was a liar”.

As Miles Taylor revealed his identity in the open letter on Wednesday, he claimed sole ownership of his book, A Warning, adding, however, that the sentiments expressed within it were allegedly shared by many officials at the highest levels of the federal government. He added that Donald Trump’s “own lieutenants were alarmed by his instability”.

Biden in Hiding After Bobulinski Bombshells