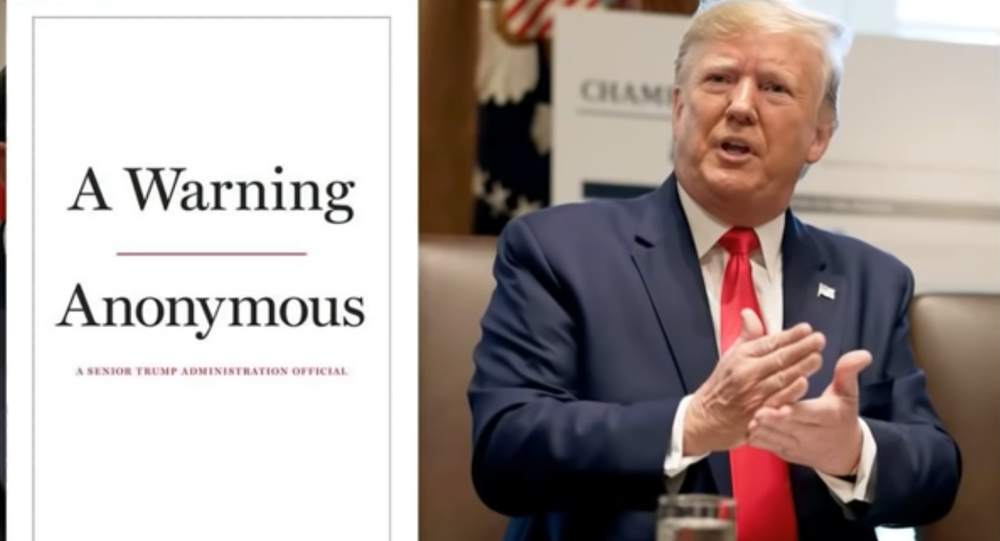 Netizens appear unimpressed and underwhelmed following the unmasking of the so-called “senior official in the Trump administration” behind the tell-all book “A Warning,” as well as the 2018 New York Times op-ed that slammed US President Donald Trump’s “erratic behavior” and nonexistent leadership qualities.

Former Department of Homeland Security (DHS) Chief of Staff Miles Taylor penned an open letter to the American public on Wednesday, revealing it was he who anonymously authored the NYT op-ed that called out US President Donald Trump’s “amorality” and touted an active “resistance” movement within the administration.

“Trump has been exactly what we conservatives always said government should NOT be: expansive, wasteful, arbitrary, unpredictable, and prone to abuses of power,” argued Taylor in his letter.

He described his anonymously published tell-all “A Warning” as “a character study of the current Commander in Chief and a caution to voters that it wasn’t as bad as it looked inside the Trump Administration - it was worse.”

While Taylor - now a CNN correspondent - appears to now want the notoriety that accompanied his writings, an overwhelming number of netizens had their own criticisms for the man formerly known as “Anonymous” - especially following his outright denial of the matter earlier this year.

When I was a contributor to @CNN, I felt I was brought in to tell the truth -- not to lie to CNN's audience. Taylor not only lied to @andersoncooper, he elaborated on the lie in this clip. That is, frankly, shocking.

.@PressSec on Miles Taylor revealing himself as "Anonymous:" "This low-level, disgruntled former staffer is a liar and a coward who chose anonymity over action and leaking over leading," calls it "appalling"
he was granted anonymity. (Taylor was Sec. Nielsen's Chief of Staff.)

Miles Taylor complained in writing about Trump’s anti-immigrant policies. But he worked as the @DHSgov secretary’s chief of staff as she helped launch family separation. Now, he wants us all to douse him in holy water. Other Trump officials will want the same. Don’t fall for it.

Miles Taylor was a critical part of the team that decided to separated thousands of migrant kids from their parents, resulting in lifelong psychological trauma. He would like you to believe otherwise.

Anyone who chose anonymity as children were being taken from their parents is not worthy of recognition. Kthx pic.twitter.com/IEP4VKL1oR

Btw -it’s worth noting that when #MilesTaylor & I traveled to #Mexico with our bosses, he seemed totally on board with the agenda. No sign of frustration, concern, discontent. No wonder Americans don’t trust #Washington

I can’t stop laughing. What a bust.

The NYT, which granted Taylor anonymity for his op-ed, was also dragged on social media for listing the former DHS chief of staff as a “senior administration official” when he did not even make it to the DHS leadership website and actually held the position of deputy chief of staff at the time of the article’s publication.

Wow. Miles Taylor wasn't even listed on DHS's senior leadership page when NYT published his op-ed because he was just a policy advisor, not even chief of staff.

Here's a snapshot of top leadership at DHS a few weeks after the op-ed was published. (October 2018) pic.twitter.com/3CPzKcdB6N

I also didn’t realize the definition of “senior administration official” could be *this* expansive. Wasn’t even an agency chief of staff at the time the op-ed ran.

The mere fact that the majority of people clearly came away with the perception that the author was dramatically more senior that he was in reality means that the Times failed to provide its readership sufficient context.

The @NYTimes has some explaining to do, getting away with ever calling Miles Taylor a "senior" administration official.

The US president also weighed in on the matter, falsely claiming for a second time that he does not know Taylor and has “never even heard of him.” In the same tweet, though, Trump noted Taylor’s former employment at Google and current job at CNN - proving he does in fact know who the former DHS chief of staff is.

Who is Miles Taylor? Said he was “anonymous”, but I don’t know him - never even heard of him. Just another @nytimes SCAM - he worked in conjunction with them. Also worked for Big Tech’s @Google. Now works for Fake News @CNN. They should fire, shame, and punish everybody....

Taylor reportedly decided to take a leave of absence from Google until after the 2020 presidential election on November 3.

The Trump appointee, who worked under both former DHS Secretary Kirstjen Nielsen and acting DHS Secretary Chad Wolf, was praised by many after he appeared in a testimonial ad for the group Republican Voters Against Trump and endorsed Democratic presidential nominee and former US Vice President Joe Biden.

NEW: Testimonial ad from Trump's Former DHS Chief of Staff @MilesTaylorUSA, declaring his support for Joe Biden and describing Trump's presidency as "terrifying" and "actively doing damage to our security."

Taylor asserted the US president “wanted to exploit the Department of Homeland Security for his own political purposes and to fuel his own agenda” - which did not come as a surprise to many, considering the US president’s racist 2016 campaign rhetoric against Mexicans and the immigration policies of his administration.

Taylor also published an op-ed in the Washington Post in August, claiming the US president was “often talked out of bad ideas at the last moment.”