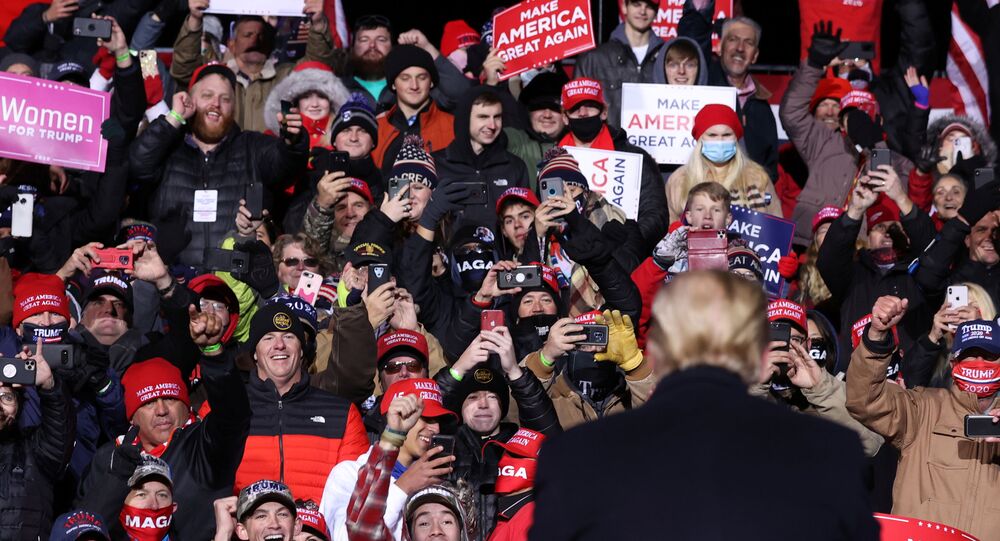 Hundreds of US President Donald Trump’s supporters found themselves stranded and forced to endure freezing temperatures for hours following the conclusion of the president’s rally in Omaha, Nebraska, on Tuesday due to a lack of shuttle buses.

The US president wrapped his outdoor rally and departed Omaha’s Eppley Airfield via Air Force One around 9:00 p.m. local time on October 27. While attendees received shuttle bus rides from their vehicles to the airfield, it quickly became apparent that transportation services had hit a snag after the event.

Thousands of people left out in the cold and stranded in #Omaha, #Nebraska after a #Trump rally. I’m told the shuttles aren’t operating & there aren’t enough busses. Police didn’t seem to know what to do. Some walked. I saw at least one woman getting medical attention. pic.twitter.com/oIkmixaZt0

“Some just gave up and walked from the airfield, back to wherever they parked,” he noted. “It was about 32° [Fahrenheit] out at the time. Many had already spent hours outside as they waited for POTUS to arrive.”

Some 30 attendees were “contacted for medical reasons,” and at least seven individuals were transported to a local hospital, the Omaha Police Department told BuzzFeed News.

The Omaha Scanner provided updates on the situation throughout the night and, at one point, claimed local authorities “located an elderly party who is frozen cold unable to move with an altered mental status.”

According to the account, 20 empty shuttles were stuck in the “South Economy parking lot” due to heavy traffic. Spotty cell service also hindered police communications.

The Omaha Scanner was eventually able to confirm the event site was virtually cleared around 12:39 a.m. local time Wednesday.

"Is there any place you would rather be than a Trump rally on about a 10-degree [Fahrenheit] evening? ... It's cold out here, but that's OK," Trump said amid the crowd’s “lock him up” chants referencing Democratic presidential nominee and former US Vice President Joe Biden.

Trump fans chant "lock him up!" about Joe Biden. It's a hate movement.

Trump responds by saying, "is there any place that you'd rather be than a Trump rally on about a 10 degree evening?" pic.twitter.com/6wR7TKdqmm

“President Trump loves his supporters and was thrilled to visit Omaha last night. Despite the cold, tens of thousands of people showed up for his rally. Because of the sheer size of the crowd, we deployed 40 shuttle buses – double the normal allotment – but local road closures and resulting congestion caused delays,” claimed Samantha Zager, the spokesperson for the Trump reelection campaign, in a statement provided to The Hill.

“At the guest departure location, we had tents, heaters, generators, hot cocoa, and handwarmers available for guests. We always strive to provide the best guest experience at our events, and we care about their safety.”

Trump claimed Tuesday that some 29,000 supporters were in attendance. However, Omaha Airport Authority Chief of Police Tim Conahan said around 21,000 individuals were screened, according to the Omaha World-Herald.

Nebraska State Senator Megan Hunt slammed Trump as a “con man” while commenting on the situation via Twitter.

“Supporters of the President were brought in, but buses weren’t able to get back to transport people out. It’s freezing and snowy in Omaha tonight.”