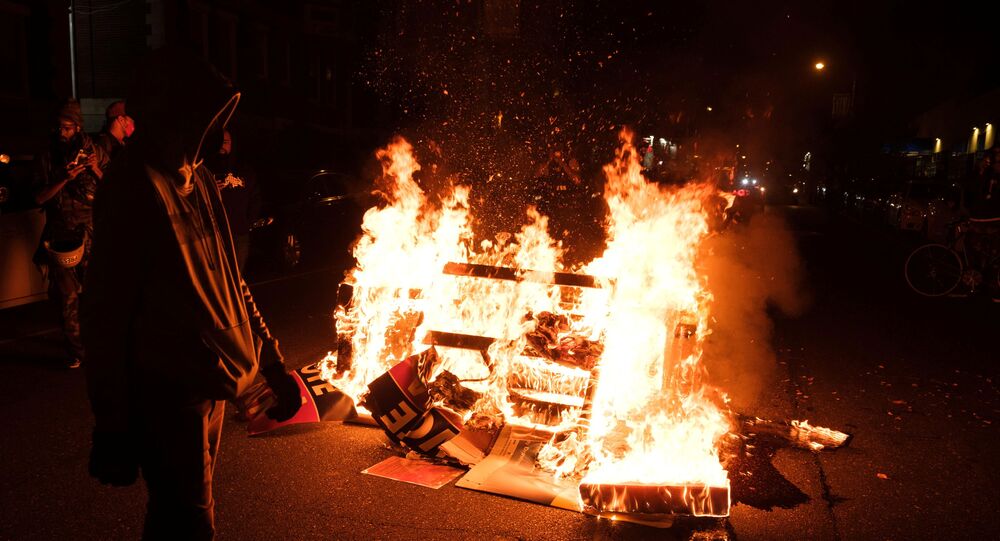 On Monday, 27-year-old Walter Wallace was fatally shot in a confrontation with Philadelphia police, when the African-American father of nine reportedly refused to drop a knife in his possession. After his death in hospital shortly following the incident, riots erupted across the city and beyond, leading to the arrest of nearly 100 people.

Philadelphia police are said to be preparing for a new wave of demonstrations on Wednesday, and the National Guard is set to arrive in the next few days at the city’s request, according to The Chicago Tribune.

​According to reports, hundreds of people marched towards police headquarters from West Philadelphia in the night to be met by officers with shields. The police said that the demonstrators have been throwing debris towards them, leading to two officers being injured, although it is not known how badly. Local businesses have also reportedly experienced damages, and shops have been pilfered.

They are also shooting each other. I’ve only witnessed one arrest pic.twitter.com/bHPGAntwST

The clashes have taken place in the city since Monday, when 27-year-old African-American Walter Wallace was killed during a stand-off with police who reportedly responded to a call about an armed man.

According to the authorities, Wallace was carrying a knife and ignored orders to drop the weapon, prompting officers to fire at least 14 shots at him. His family later said that Wallace had experienced a mental health crisis during the incident and the police should have been aware of that, as the officers had reportedly been called to his house three times on Monday. However, police officials could not confirm that the officers on duty, who had received a call about an armed and screaming man, had been given information about a possible mental health illness.

© REUTERS / BASTIAAN SLABBERS
Demonstrators raise their fists in front of police officers during a rally after the death of Walter Wallace Jr., a Black man who was shot by police in Philadelphia, Pennsylvania, U.S., October 27, 2020

According to the family’s attorney, Shaka Johnson, Wallace, who already has nine children, was expecting another one with his wife this week.

As the investigation is ongoing the men were taken off street duty, Police Commissioner Danielle Outlaw revealed.

The incident prompted widespread demonstrations in the city on Monday, leading to the arrest of more than 90 people and injuries among dozens of officers, which eventually spilt over to other cities, including New York.