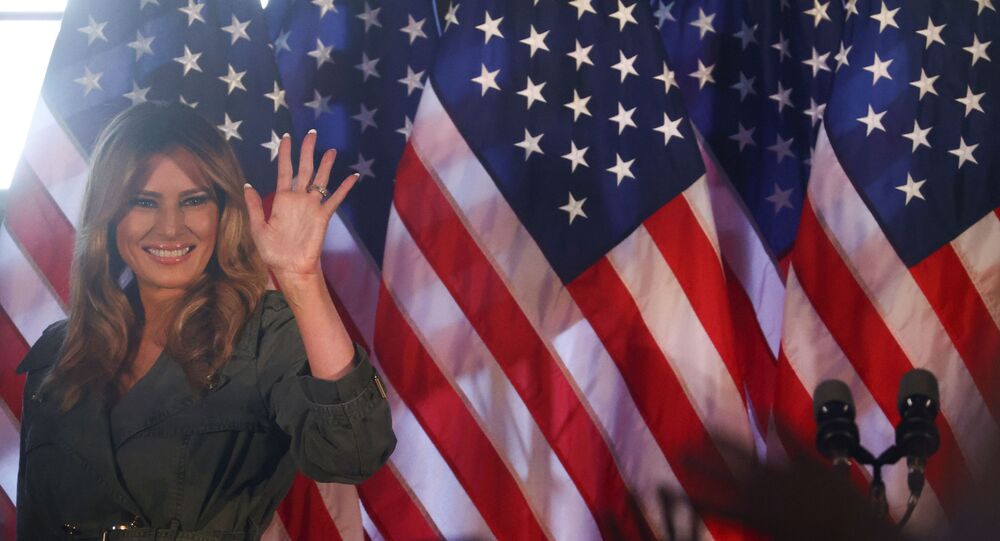 Remarking on her husband's Twitter style, Melania argued that while she doesn't always agree with “the way he says things”, it is “important to hear that he speaks directly to the people he serves”.

According to the media outlet, the first lady's speech somewhat differed from her “usual toned-down public appearances”, being rather similar to “her husband’s campaign appearances” instead.

As she addressed the people attending the event at Atglen, Pennsylvania, Melania suggested that "the American people can look at Joe Biden’s 36 years in Congress and eight years as the VP and determine if he will be able to finally get something done for the American people".

"Joe Biden’s policy and socialist agenda will destroy America and all that has been built in the past four years," she declared.

The FLOTUS also criticised Democrats in general, pointing at the timing of their attempts to impeach her husband.

"Let us also not forget what the Dems chose to focus on when the pandemic entered our country. The Dems were wasting American taxpayer dollars in a sham impeachment. They cared more about removing our elected president," she said.

Melania also commented on her husband's trademark Twitter style, arguing that while she does not always agree with "the way he says things", it is "important to hear that he speaks directly to the people he serves".

"For the first time in history, the citizens of this country hear directly from their president through social media," she remarked.

Melania's speech comes mere days ahead of the impending presidential election in the United States, which is slated to take place on 3 November.

In September 2019, the Democrat-led House of Representatives launched an impeachment inquiry into the US president over his 25 July phone conversation with Ukrainian President Volodymyr Zelensky, in which Trump allegedly asked officials in Kiev to probe rival presidential candidate Joe Biden, while threatening to hold back US military aid for Ukraine.

In February 2020, however, the Republican-majority US Senate voted to acquit POTUS after he was impeached by the US House for abuse of power and obstruction to Congress.

Trump himself maintained his innocence throughout the entire process, describing his impeachment as a political "witch hunt".