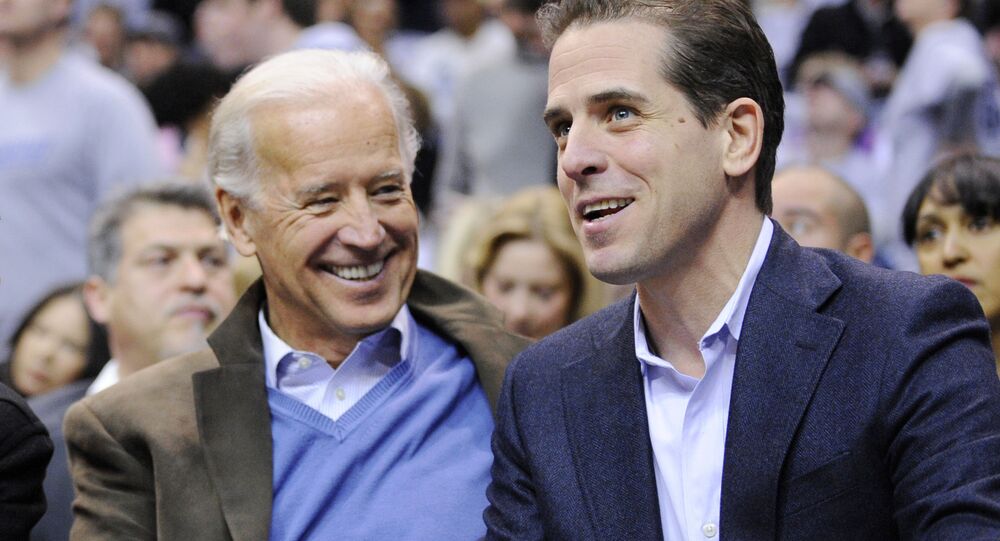 Tony Bobulinski earlier sought to "set the record straight" about the Biden family's alleged involvement in joint business dealings with the Chinese at a news conference on 22 October, suggesting that the current Democratic presidential contender’s earlier claim of never having discussed business with his son was "false".

A former business associate of Joe Biden’s son has claimed that he had previously raised concerns to the family that the current Democratic presidential contender’s 2020 campaign might be impacted by his alleged ties to Hunter Biden's business deals, reports Fox News.

Tony Bobulinski, a retired lieutenant in the US Navy, was formerly CEO of SinoHawk Holdings, which he alleged was a partnership between the CEFC China Energy Company Chairman Ye Jianming and the two Biden family members.

In a Tuesday interview with Fox News’ “Tucker Carlson Tonight,” Bobulinski claimed the Biden family had dismissed concerns he raised back in 2017 to the former vice president's brother Jim Biden.

As he broached the issue of Joe Biden’s purported ties to an alleged joint venture with a Chinese energy firm, he says Jim Biden laughed.

“I remember saying, ‘How are you guys getting away with this?’ ‘Aren't you concerned?’” said Bobulinski in the interview.

According to him, the current White House hopeful’s brother had responded with the words, “Plausible Deniability”, as the two men were reportedly speaking in a cabana at the Peninsula Hotel.

In the interview, the former business associate of Hunter Biden describes an alleged meeting with Joe Biden on 2 May 2017, that was originally cited by Fox News with reference to reported text messages.

According to Bobulinski, the Bidens had specifically sought to engage him for their dealings.

“They were sort of wining and dining me and presenting the strength of the Biden family to get me engaged and to take on the CEO role to develop SinoHawk in the US and around the world in partnership with CEFC,” says Bobulinski.

He says he personally never asked for a meeting with Joe Biden, yet, he was introduced to him by Jim and Hunter Biden, who were “putting their entire family legacy on the line”.

“Why on 10:38 on the night of May 2 would Joe Biden take time out of his schedule to take time with me, behind a column so people could not see us, to have a discussion with his family and my family and business at a very high level?" queries Tony Babulinski in the interview.

The meeting with Joe Biden that is alleged to have taken place on 2 May 2017, would have been 11 days before an email dated 13 May 2017 obtained by Fox News.

The document ostensibly included a discussion of “remuneration packages” for six people linked to a suggested business deal with a Chinese energy firm.

Hunter Biden was reportedly suggested in the email as “Chair / Vice Chair depending on agreement with CEFC,” in a seeming reference to CEFC China Energy Co., declared bankrupt according to a ruling dated 31 March 2020.

The proposed equity split in the email allegedly states “20” for “H” and “10 held by H for the big guy?” with Bobulinski repeatedly insisting “the big guy” was Joe Biden.

Bobulinski alleged he was told by CEFC that the $10 million deal presupposed a $5 million loan to the Biden family, with $5 million as their contribution to capitalise SinoHawk Holdings.

Bobulinski also said he was inspired to go public after comments by House Intelligence Committee Chairman Adam Schiff that his claims were part of a “Russian disinformation” campaign.

“This isn’t a political decision, people were accusing my family of treason after I defended my country,” he said.

On 22 October Tony Bobulinski held a news conference to "set the record straight" about the Biden family's purported joint business dealings with the Chinese.

Bobulinski, CEO of Sinohawk Holdings, a business partnership between CEFC China Energy and the Biden family, lambasted Joe Biden's earlier claim that he never discussed business with his son as "false."

He insisted that at the meeting with the former Vice President on 2 May 2017 he discussed "the Bidens' business plans with the Chinese," for more than an hour, with which the current Democratic presidential candidate was "plainly familiar at least at a high level."

Bobulinski presented three cell phones and a spate of emails he alleged spanned the years of their business dealings.

"The evidence sits on these three phones. I don’t want to go into anything any further... The American people can decide what’s fact" Bobulinski said, noting the evidence would be discussed with Sen. Ron Johnson (R-WI), who chairs the Senate Homeland Security and Governmental Affairs Committee.

The ex-US Navy veteran also told the New York Post that he was one of the recipients of an email from Hunter Biden that the outlet published eight days earlier after it was recovered from a laptop supposedly abandoned by Hunter Biden at a repair store in Delaware.

That bombshell emails, whose authenticity have not been proven, threw into question Joe Biden's longstanding claim that he had never been involved in business dealings of his son Hunter Biden.

The newspaper referred to emails allegedly showing that Hunter Biden introduced his then-vice president father to a top executive at a Ukrainian energy firm, Burisma, on the board of which he served, less than a year before the elder Biden allegedly pressured government officials in Ukraine into firing a prosecutor who was investigating the company over purported corruption.

President Donald Trump suggested that the allegedly Hunter Biden-owned computer was a "laptop from hell", while denouncing the former vice president for being "a corrupt politician".

Democratic presidential hopeful Joe Biden and his campaign have repeatedly denied all allegations.

"I have not taken a penny from any foreign source ever in my life," Joe Biden said at a presidential debate last week.

Separately the Biden campaign has said that it released the former vice president’s tax documents and returns, which do not reflect any involvement with Chinese investments.