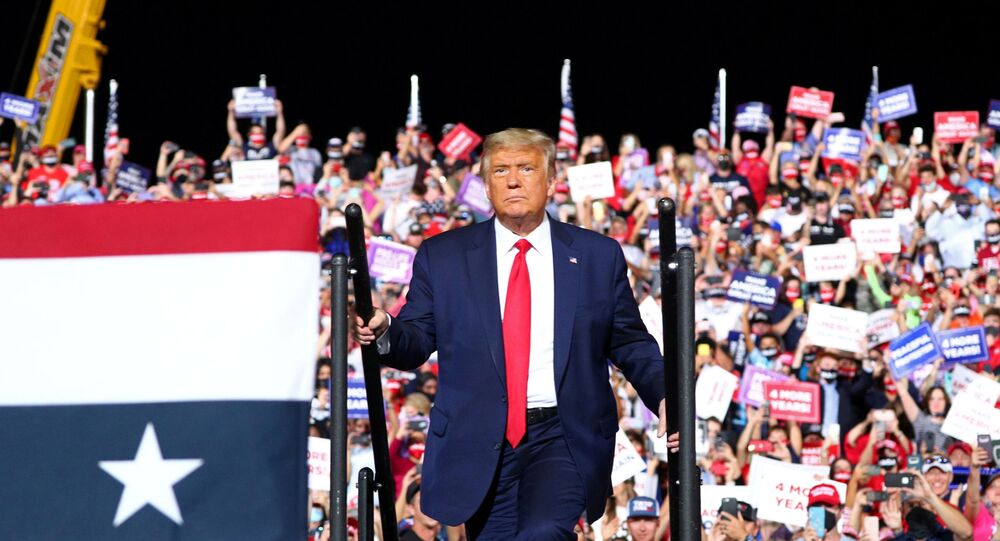 US President Donald has pulled a portion of his advertising in Florida as he focuses his remaining campaign funds on four US states, namely Michigan, Minnesota, Ohio and Pennsylvania, during the final week of the 2020 presidential election season.

According to a report by Bloomberg, which analyzed data from ad-tracking firm Advertising Analytics, the president still has $350,275 budgeted to spend on ads in Florida through Election Day, but has canceled $5.5 million worth of ad spending in the Sunshine State in the last two weeks of the campaign.

Since Labor Day, Trump has also cut $24 million from his national ad budget; however, unlike the president, Democratic challenger Joe Biden has added $197 million since Labor Day, spending three times as much as Trump on ads since early September.

“You have to have a ground game. Joe Biden does not have one. The president does,” Tim Murtaugh, the communications director for the Trump reelection campaign, said in a Tuesday call with reporters, Bloomberg reported.

“That’s why you saw the president close the gap in Florida.”

According to Bloomberg, around 312,000 more registered Republicans have voted in person in Florida than registered Democrats in the last week. “Florida is going to go the president’s way,” Murtaugh noted. However, Democrats lead mail-in voting in the state by 615,000.

Biden, on the other hand, has budgeted $8.3 million in Florida, $7.1 million in Pennsylvania, $5.3 million in Michigan and $4.9 million in North Carolina for ads through Election Day, outspending Trump in every battleground state except for Minnesota and Ohio.

According to a report by Forbes, the Biden campaign had raised $822.2 million as of September 30, compared to Trump’s $557.8 million.

Records obtained by Forbes also show that while Trump poured tens of millions of dollars into his 2016 campaign, he has not donated any money whatsoever into his reelection bid.

“The Trump campaign has all the resources we need going into the home stretch of this election. We’re running a comprehensive campaign that incorporates our massive ground game, travel to key states, and ads on digital, TV, and radio,” Samantha Zager, the Trump campaign’s deputy national secretary, said in a statement obtained by Forbes.

However, hours after Bloomberg’s article was published, Murtaugh issued a fresh statement on the piece, bashing the outlet for misusing quotes he’d given “on another topic,” and stating that the Republican National Committee was footing some of the ad costs.

“The Bloomberg story is horribly wrong and should never have been written,” he wrote, adding that the campaign “is up with a seven figure buy in Florida on broadcast TV alone.”

“This is sloppy reporting at the highest level,” Murtaugh concluded.

YMCA Strikes Back: Trump Repeats His Insane Dance During Rally in Florida - Video