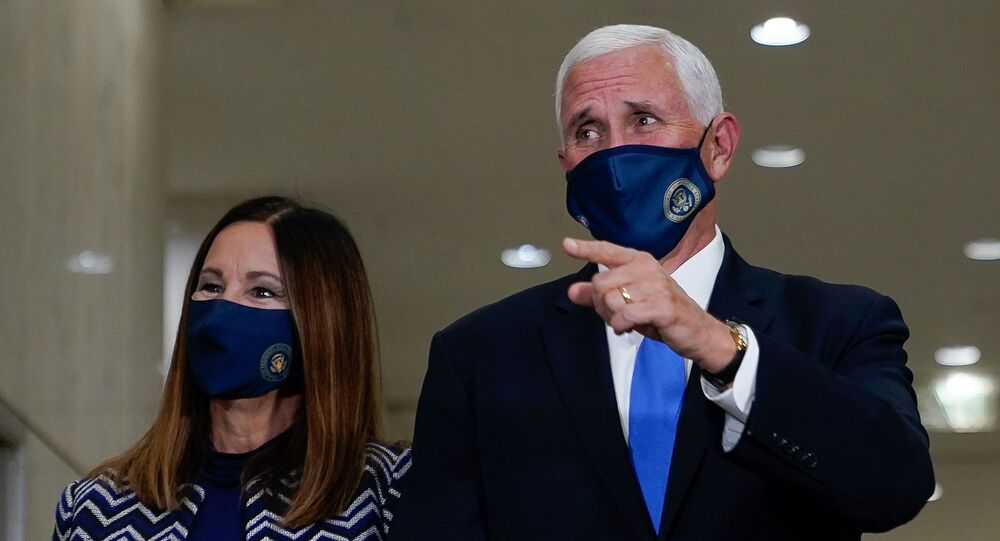 Democrats Urge Pence Not to Preside Over Senate Tuesday Due to COVID-19 Concerns, Letter Shows

WASHINGTON (Sputnik) - Ten Democratic senators wrote a letter to Vice President Mike Pence urging him to reconsider presiding over the US Senate session to confirm Judge Amy Coney Barrett as an Associate Justice of the Supreme Court on Tuesday after five of his closest aides tested positive for the novel coronavirus.

"We are writing today about your reported intention to attend the final Senate vote on the nomination of Judge Amy Coney Barrett to be an Associate Justice of the Supreme Court. With five of your closest aides recently testing positive for COVID-19, it is not a risk worth taking. We ask you to reconsider," the letter, co-signed by Minority Leader Chuch Schumer, said on Monday.

Five of Pence’s advisors, including Chief of Staff Marc Short, have recently tested positive for the novel coronavirus, media reported.

The senators warned Pence that his presence during Tuesday’s session would be in clear violation of Centers for Disease Control and Prevention (CDC) guidelines as well as a violation of common decency and courtesy.

"Your presence alone could be very dangerous to many people - not just Senators, but to all the truly essential staff - both Democratic and Republican - who must be physically present inside the US Capitol for it to function," the letter said.

The US Vice President is also president of the US Senate and votes in cases when the 100 senators’ votes are tied.

"You will not need to cast the deciding vote to break a tie. Your presence tomorrow would be purely ceremonial," the letter said.

Pence has repeatedly tested negative for the novel coronavirus over the last several days.

Barret is expected to be approved in a straight party-line vote in the Republican-led Senate on Monday.