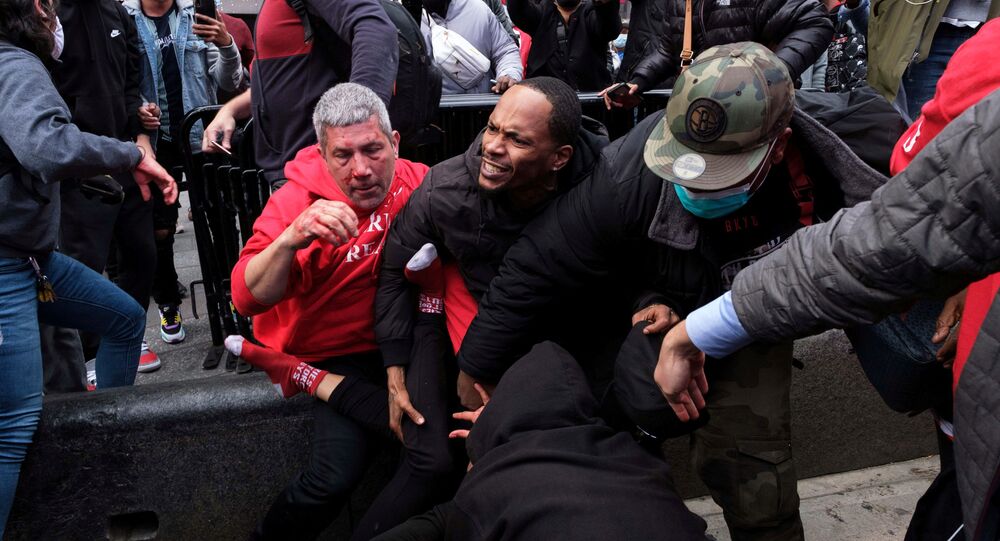 As the United States prepares to hold its 2020 presidential elections in 9 days, in which Republican President Donald Trump is seeking re-election against Democratic candidate and former US Vice President Joe Biden, supporters of the two candidates have repeatedly come into contact with each other during rallies.

A “Jews For Trump” parade of vehicles reportedly came under attack as the rally supporting US President Donald Trump traveled the streets of New York City, Fox News reported on Sunday.

The news outlet reported incidents of Trump supporters being attacked by "counter-protesters" in different parts of the Big Apple, including Brooklyn and Manhattan.

The alleged attacks against ‘Jews For Trump’ took various forms, including throwing eggs and stones at cars with pro-Trump flags, yelling expletives, and in some cases, confrontations between rally participants and protesters reportedly turned into chaos.

This man is so upset that a #JewsForTrump vehicle convoy practically shut down the Brooklyn Bridge while heading to Manhattan, that he began punching vehicles. @NYPDnews @realDonaldTrump @TrumpWarRoom pic.twitter.com/6kSZKUoa0F

In response ANTIFA gets completely wrecked

Police made several arrests among both pro-Trump rally-goers and anti-Trump protesters.

Woman arrested for spraying pepper spray at the #JewsForTrump vehicle convoy on 5 Avenue in Manhattan. pic.twitter.com/kfrwaLTJgT

New York Police Department Chief Terence Monahan announced on Sunday an investigation into the allegations of attacks against Trump supporters.

“@NYPDDetectives are investigating this incident and looking for information in regard,” Monahan tweeted.

The NYPD department chief shared a video of an incident under investigation, calling on New Yorkers with information about it to reach out to the department. The video shows at least one person throwing stones from a sidewalk overpass down onto passing vehicles flying pro-Trump flags.

.@NYPDDetectives are investigating this incident and looking for information in regard. Call @NYPDTips at #800577TIPS. https://t.co/pyqQ2Bfkhb

NYPD Commissioner Dermot Shea described that such attacks are “very dangerous” and added that there were no injuries.

Anyone with information on this incident please reach out to @NYPDTips.
Very dangerous and lucky that no one was injured. @NYPDDetectives @BrooklynDA https://t.co/w1OmyqvAet

Trump is seeking re-election against the Democratic presidential candidate and former US Vice President, Joe Biden. The election is set for 3 November.