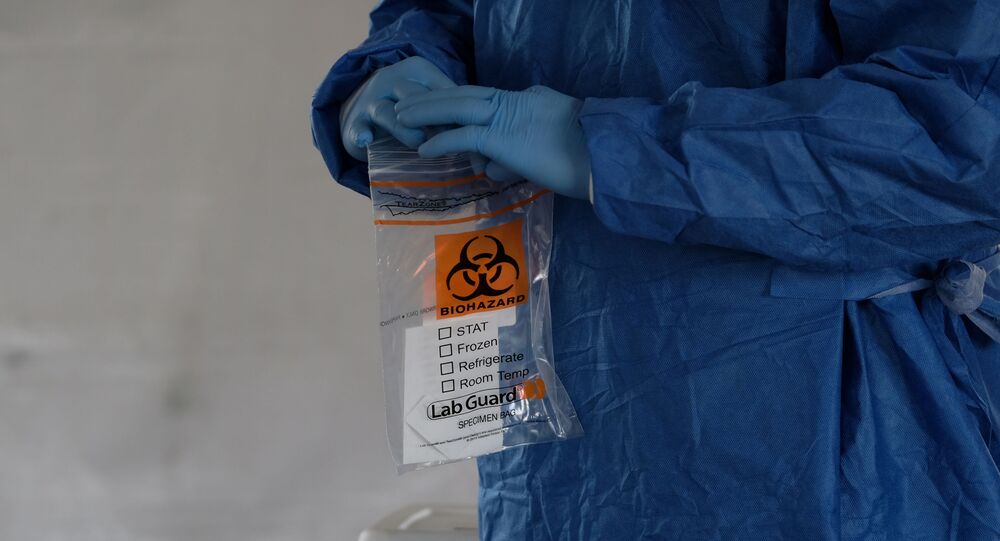 The United States set a new record for daily COVID-19 cases on Thursday, with more than 77,000 new cases recorded, according to the latest tally by NBC News.

The second-highest number of recorded cases in the US occurred on July 29, when nearly 76,000 new daily infections were reported. The latest record-breaking daily number comes as the total numbers of COVID-19 cases and related deaths in the US have surpassed 8.7 million and 228,000, respectively, according to the latest data by Worldometer.

The new daily record also comes after US President Donald Trump on Thursday, during his final debate with former Vice President Joe Biden, claimed that the pandemic “will soon be gone.”

"We’ve been hearing essentially the same words from the president since February, that it was going to go away, that it’s going to disappear, whether that’s in February, March, April, May, and that’s what he’s saying now," Dr. Ashish Jha, dean of the Brown University School of Public Health, told MSNBC on Friday, NBC News reported. "That’s not what the data says, unfortunately. I wish he was right."

A recent analysis by Reuters also found that hospitals across the US have seen a 36% jump in COVID-19 patients over the last four weeks, with Midwest hospitals setting new daily records.

Since October, 16 states have reported their highest daily numbers of hospitalized patients since the pandemic first broke out, including Iowa, Kansas, Missouri, Nebraska, North Dakota, South Dakota and Wisconsin, according to Reuters.

On Wednesday, Wisconsin Governor Tony Evers urged residents to stay home after a field hospital in the Milwaukee suburbs admitted its first COVID-19 patient after it opened last week.

New Mexico has also experienced a spike in cases, with the state having recorded more than 39,000 cases overall as of Friday. In addition, around 80% of the state’s general hospital beds are currently occupied.

“It’s the most dire situation our state has faced ever and so far in this entire pandemic,” said Nora Meyers Sackett, a spokesperson for New Mexico Governor Lujan Grisham, according to the Santa Fe New Mexican.

“We are on a precipice of facing even more growth of the virus if every New Mexican doesn’t hunker down and do what needs to be done to mitigate the spread,” she added.

In addition to the rising hospitalizations, the seven-day average of new US COVID-19 cases has increased by 45% in the last four weeks, the Reuters analysis revealed.

The increase in hospitalizations is alarming, as it may be an indication that hospitals will soon struggle to respond to the surges.

Dr. Robert Redfield, director of the US Centers for Disease Control and Prevention, also warned on Wednesday that “the pandemic is not over.”

Some people have argued that the increase in COVID-19 testing may explain the steep surge in cases.

Although data compiled by the COVID Tracking Project shows that the US conducted more than 1.1 million tests Thursday, the number of cases has increased at a faster rate than testing.

“If steps are not taken to reduce transmission at the community level, it’ll come to no surprise that health care systems start to feel a pinch and start to head towards capacity and beyond capacity,” Dr. Isaac Bogoch, an infectious disease specialist and professor at the University of Toronto, recently told CNBC.