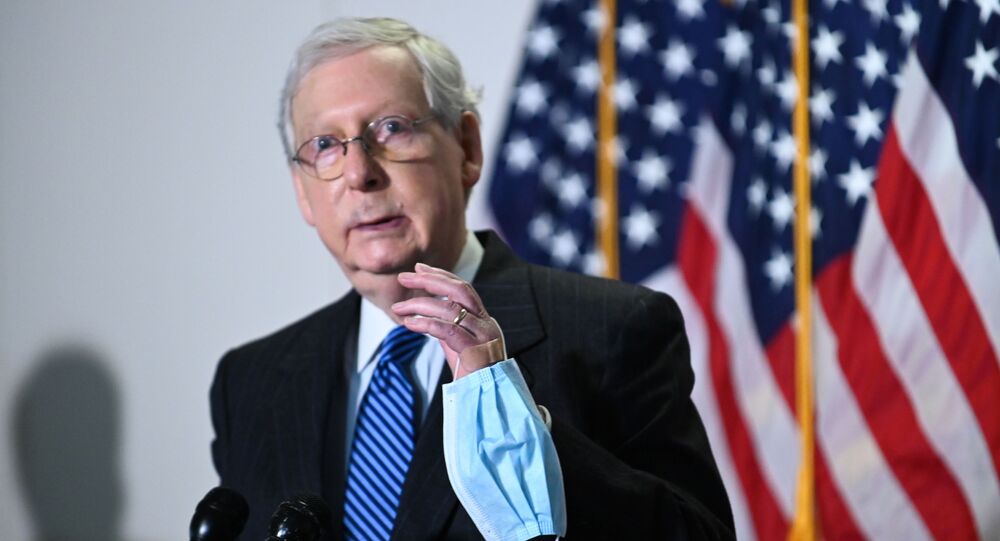 In a portion of an interview with Norah O’Donnell on the CBS News ‘60 Minutes’ show released on Tuesday, Democratic presidential candidate, former US Vice President Joe Biden, announced his intention to, if elected, create a national commission to study and provide recommendations to reform the US court system “because it's getting out of whack”.

US Senate Majority Leader Mitch McConnell said on Thursday, during an interview Fox News’s ‘The Daily Briefing with Dana Perino’, that a court reform plan proposed by Democratic presidential candidate Joe Biden indicates that “he is open” to court-packing.

He argued that court-packing, a term used to refer to the practice of adding more justices to the US Supreme Court, “ought to be completely unacceptable”.

“Justice Ginsburg had it right. She was asked about this last year. She said nine is the right number. She pointed out that Franklin Roosevelt tried to pack the court. It was a political disaster for him, not the right thing to do, and the perfect way to destabilize the judiciary. Court-packing ought to be completely unacceptable,” McConnell said. “It was when Joe [Biden] was chairman of the Judiciary Committee. Now he is hedging. When he's hedging the answer is yes, he's open to it.”

On Tuesday, CBS News released a portion of a Biden interview on ‘60 Minutes’, set to air on Sunday, in which the former vice president said that he would convene a national commission that includes “Democrats, Republicans, liberals, conservatives” to study the court system and recommend reforms.

“If elected, what I will do is I'll put together a national commission, a bipartisan commission of scholars, constitutional scholars, Democrats, Republicans, liberals, conservatives,” Biden stated in a clip released on Thursday. “I will ask them to, over 180 days, come back to me with recommendations as to how to reform the court system because it's getting out of whack.”

He told ‘60 Minutes’ journalist Norah O’Donnell that the reforms he is seeking are “not about court-packing”, arguing that “there's a number of other things that our constitutional scholars have debated, and I've looked to see what recommendations that commission might make”.

“There's a number of alternatives that are — go well beyond packing,” the Democratic presidential nominee said, though he admitted this issue “is a live ball”. “The last thing we need to do is turn the Supreme Court into just a political football, whoever has the most votes gets whatever they want. Presidents come and go. Supreme Court justices stay for generations.”

As a seat has been made vacant in the US Supreme Court following the death of liberal Justice Ruth Bader Ginsburg on 18 September, US President Donald Trump quickly nominated conservative judge Amy Coney Barrett to be a replacement.

Earlier On Thursday, the US Senate Judiciary Committee voted 12-0 to advance Trump's nominee as Democrats boycotted the session. In its next stage, Barrett’s approval process will see the full Senate voting. McConnell has said he expects the chamber to hold the final vote to confirm Barrett on 26 October.

If confirmed, Barrett would cement a Supreme Court 6-3 conservative majority, a statistic which prompted some Democrats to call for expanding the number of justices on the court.

Biden said earlier this month that he has “not been a fan” of court-packing but his final decision depends on whether Barrett is confirmed.

“I have not been a fan of pack — court-packing, because I think it just generates what will happen every — whoever wins, it just keeps moving in a way that is inconsistent with what is going to be manageable,” Biden said. “I would then say, it depends on how this turns out… how it’s handled.”