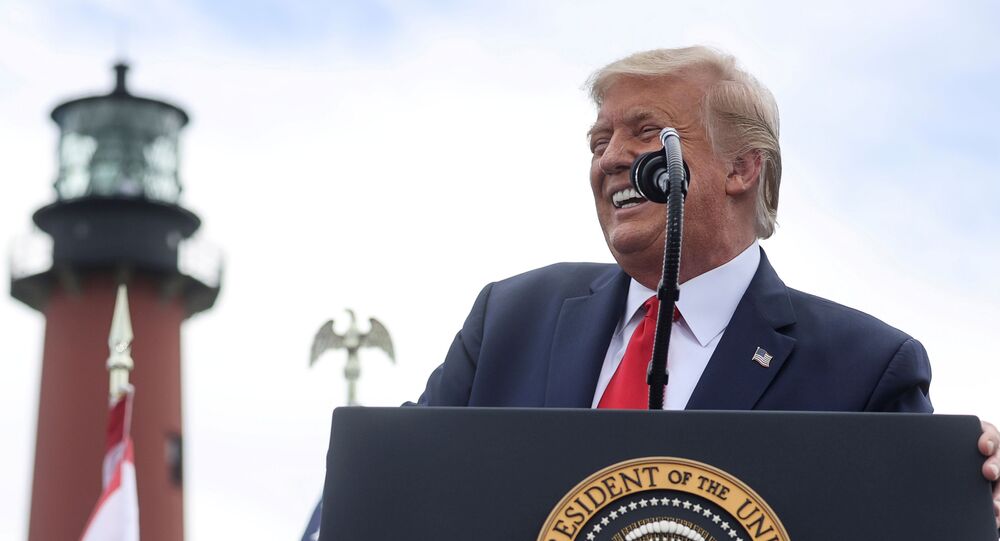 On Tuesday, CBS News journalist Lesley Stahl interviewed US President Donald Trump for the show "60 Minutes". It was scheduled to air on Sunday, alongside another interview with Democratic presidential candidate Joe Biden, who earlier talked to correspondent Norah O'Donnell.

US President Donald Trump on Thursday posted a video of a Tuesday interview with journalist Lesley Stahl for CBS News "60 Minutes" that is set to air on Sunday.

The nearly 40-minute unedited footage released by Trump was posted to Facebook ahead of the final presidential debate, apparently taken by a member of the White House team, and was intended to, according to the US president, show "bias, hatred, and rudeness on behalf of 60 Minutes and CBS".

During the interview, which covered the Trump administration's response to the coronavirus pandemic, recent polls, his campaign plans and priorities, along with some of his claims and rhetoric, Trump repeatedly complained that the questions were "biased". The anchor many times rejected the president's answers, declaring that "60 Minutes could not verify" them.

"I think we have done a great job with COVID", Trump said of his administration's COVID-19 response, before Stahl interrupted him saying, "Sir, excuse me. Cases are up in about 40 states".

"Because we do so much testing, the fake news media loves to say, cases are up. The fact is we have done a very good job", Trump replied.

At another point in the interview, the journalist asked Trump to comment on his recent "plea" to suburban women to "please like me" during a campaign rally in Pennsylvania last week. Trump argued that he had "said that in a joking way".

"Oh I didn't say that. You know, that is so misleading the way you said it. I say jokingly, suburban women you should love me because I'm giving you security and I got rid of the worst regulation", Trump said.

Over the course of the sit-down, Trump slammed anchor Stahl for not focusing on topics such as the emails purportedly recovered from a laptop alleged to have belonged to Hunter Biden that, if their authenticity is confirmed, would suggest potentially corrupt overseas dealings.

Trump also talked about allegations of interference by the Obama administration in the 2016 presidential campaign.

Before walking out off the interview, Trump criticised the anchor for opening the sit-down by asking whether he was "ready for some tough questions". The Republican president said that Stahl's opening was "no way to talk" and questioned why she did not ask tough questions to rival Biden.

The journalist responded that she did not interview the former vice president, as Trump quickly corrected himself, claiming that he had watched "the interview with Joe".

"I think we have enough. We have enough", Trump said in the video, when he ended the sit-down with the "60 Minutes" journalist, as a production assistant noted that Vice President Mike Pence would join the interview in five minutes.

Following that, Trump apparently told someone off-camera that he would meet him "in two seconds", before saying to the anchor "see you later" and leaving.

Later in the day, in response to "the White House's unprecedented decision" to release their own recording of the interview set to air on Sunday, CBS News said in a statement that the stunt "will not deter" its programme from "providing its full, fair, and contextual reporting".

"The White House's unprecedented decision to disregard their agreement with CBS News and release their footage will not deter 60 MINUTES from providing its full, fair, and contextual reporting which presidents have participated in for decades", CBS News noted. "Few journalists have the presidential interview experience Lesley Stahl has delivered over her decades as one of the premier correspondents in America and we look forward to audiences seeing her third interview with President Trump and subsequent interview with Vice President Pence this weekend".

Trump and Democratic candidate Biden held their second and final presidential debate on Thursday, twelve days ahead of the 3 November national election.