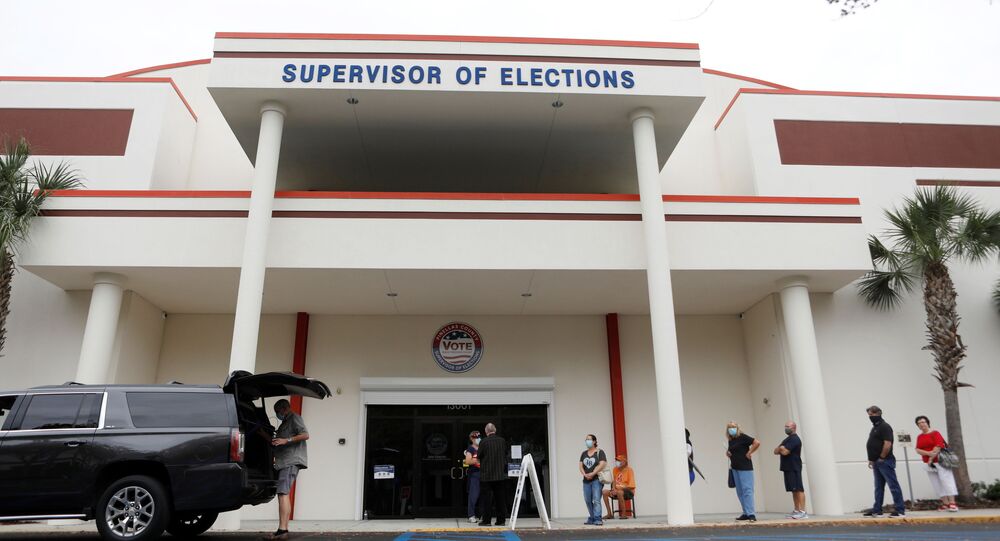 US President Donald Trump’s reelection campaign is denying any affiliation with two armed individuals who donned security guard attire and were seen loitering outside a voting location in Pinellas County, Florida, earlier this week. The duo, however, reportedly told authorities that they were hired by the Trump campaign.

“The campaign did not hire these individuals nor did the campaign direct them to go to the voting location,” Thea McDonald, deputy national press secretary for Trump’s campaign, said in a statement to Tampa, Florida, outlet WFLA.

McDonald’s statement came hours after two individuals claiming to be on the campaign’s payroll were spotted in close proximity to early voters at the Supervisor of Elections Office in downtown St. Petersburg.

Pinellas County, Florida Deputies to be stationed at early voting sites after armed guards who claim to be hired by the Trump campaign prompt voter complaintshttps://t.co/1FaNVj0kOr

Can anyone identify the Armed Guards and what Security Company they work for ?#ReTweet pic.twitter.com/uUeVYfZCIJ

“Voter intimidation will not be tolerated here,” Democratic Mayor of St. Petersburg Rick Kriseman tweeted Thursday morning. “Please contact law enforcement if you witness any form of intimidation, including the presence of armed security guards. Voting in Pinellas County is safe. It always has been. We will ensure that remains the case.

Kriseman appeared to disagree with the Pinellas County Sheriff’s Office decision to now assign uniformed cops to the five voting sites within the county.

“There’s zero reason for anyone to be armed, openly armed, out in front of a polling place,” he expressed during a news conference.

Sheriff Bob Gualtieri has argued that the abrupt change comes as a result of several reports of “people yelling and screaming at each other” while at voting sites, adding that, in general, “people are on the edge of their seats” amid the election.

He contended that the two individuals in question “didn’t do anything that would lead anybody to believe in any way that they engaged in intimidation, coercion, or anything improper.”

During the September 29 presidential debate, Trump emphatically encouraged his supporters “to go to the polls and watch very carefully.”

Trump says “I’m urging my supporters to go into the polls & watch very carefully because that’s what has to happen.” Says “bad things happen in Philadelphia.”

This is a clear #VoterSuppression tactic aimed at Black and brown voters in Philly. #Debate2020 pic.twitter.com/42BNgdR7OZ

This came alongside the Trump reelection campaign’s ongoing efforts to enlist supporters to assist in the president’s “Election Day operations” (EDO). Video within the “Army for Trump” website claims a so-called EDO volunteer will be “trained on the election laws in your area” and then sign up for a “shift” at a local polling location.

“We need you to help us watch them. Not just on Election Day, but also during early voting and at the counting boards,” he stated, requesting users visit the Republican National Committee’s (RNC) website “Protect the Vote.”

The RNC’s website accuses Democrats of “waging an assault on the integrity of our elections” and encourages Americans to add their names to the “Official Protect the Vote Petition.”

More than 47 million early votes have been cast prior to the official US presidential election on November 3, according to the US Elections Project. The number of ballots already cast is equal to 34.2% of the total votes counted in the 2016 US general election.