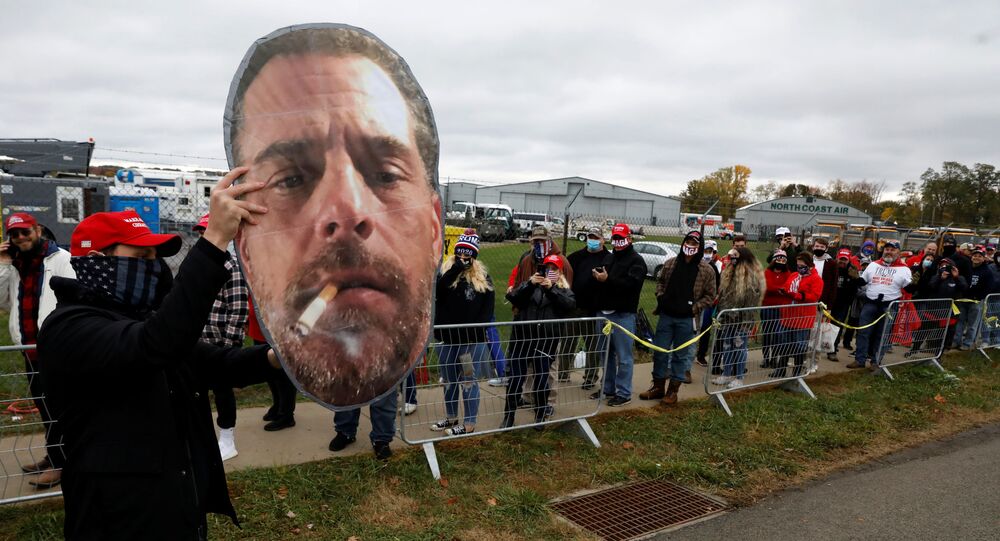 Last week, The New York Post published an article said to contain emails recovered from a damaged laptop computer claimed to have been left at a Delaware repair shop by Hunter Biden. The unverified emails allege corrupt overseas business dealings by the Bidens. The FBI interviewed the owner of the repair shop who reported the content.

The laptop said to contain controversial emails allegedly attributed to former US Vice President Joe Biden’s son, Hunter, has been linked to a money-laundering investigation by the US Federal Bureau of Investigation (FBI) in late 2019, Fox News reported on Wednesday, citing obtained documents.

The outlet said that the authenticity of the documents has been verified and confirmed by multiple federal law enforcement officials, along with other government officials.

Photos of the obtained documents, published in Fox News’s article, included an FBI “Receipt for Property” detailing the agency’s interaction with John Paul Mac Isaac, the owner of the computer repair shop, where the Democratic presidential nominee’s son allegedly brought three computers for repair in April 2019.

Based on the “Case ID” featured on the document, “272D-BA-3065729”, officials told the outlet that the code “272” is the FBI’s classification for money laundering, while the same code in combination with the letter “D” refers to “Money Laundering, Unknown SUA [Specified Unlawful Activity]—White Collar Crime Program”. In the meanwhile, initials “BA” indicates that the case was issued in the bureau’s field office in Baltimore.

According to the documents, the FBI subpoenaed ‘The Mac Shop’ owner in Wilmington, Delaware, which went under the FBI’s Baltimore Field Office.

“The FBI cannot open a case without predication, so they believed there was predication for criminal activity,” an unnamed government official said, quoted by Fox News. “This means there was sufficient evidence to believe that there was criminal conduct.”

Among the documents, Fox News also obtained a subpoena sent to Isaac to give testimony before a US District Court in Delaware in December 2019. The subpoena seemingly included the serial numbers of one of the three MacBook Pro laptops said to belong to the younger Biden along with a hard drive taken into possession by authorities.

Another unnamed official suggested the money laundering case could have been opened prior to Isaac's subpoena, citing the date of the subpoena.

“If a criminal case was opened and subpoenas were issued, that means there is a high likelihood that both the laptop and hard drive contain fruits of criminal activity,” the official told Fox News.

According to Fox News, it’s not clear whether the investigation in question is ongoing or whether it’s related in any way to Hunter Biden. The FBI reportedly did not confirm or deny the existence of an investigation into the laptop or the purported emails.

'The Laptop From Hell'

In an article published last Wednesday, The New York Post revealed emails allegedly recovered from the hard drive of a damaged laptop computer left at a Delaware shop by Joe Biden’s second son in April 2019. The newspaper said that the documents were provided by President Donald Trump’s personal lawyer, Rudy Giuliani.

The documents allegedly shed light on Hunter Biden and his dealings with Ukrainian company Burisma, while Joe Biden, as vice president, worked on Ukraine policy. According to the unverified emails, Biden Jr. is alleged to have introduced the former vice president to a top executive at the energy firm.

In a statement to Fox News, this Wednesday, Biden campaign spokesman Andrew Bates said that Delaware's Attorney General office is investigating “the veracity of this entire story” about Hunter Biden, especially as Giuliani is involved.

Richard Sauber, an attorney connected to the Biden campaign, told Fox that the FBI usually opens money-laundering probes whenever it comes to a US citizen “like Rudy Giuliani” who is suspected of being involved in “Russian disinformation campaigns”.

Earlier this week, the Trump-appointed Director of National Intelligence, John Ratcliffe, confirmed that the purported laptop “is not part of some Russian disinformation campaign”.

Commenting on the situation with the alleged laptop, Trump, during a campaign rally in Prescott, Arizona, on 19 October, suggested that the notebook computer was a “laptop from hell”, while accusing the former vice president of being "a corrupt politician" and the Biden family of being "a criminal enterprise".

The story about Hunter's alleged illegal dealings involving his father made headlines again several weeks before the US 2020 presidential election, with Joe Biden and the incumbent the two main candidates from the Democratic party and the Republican party.