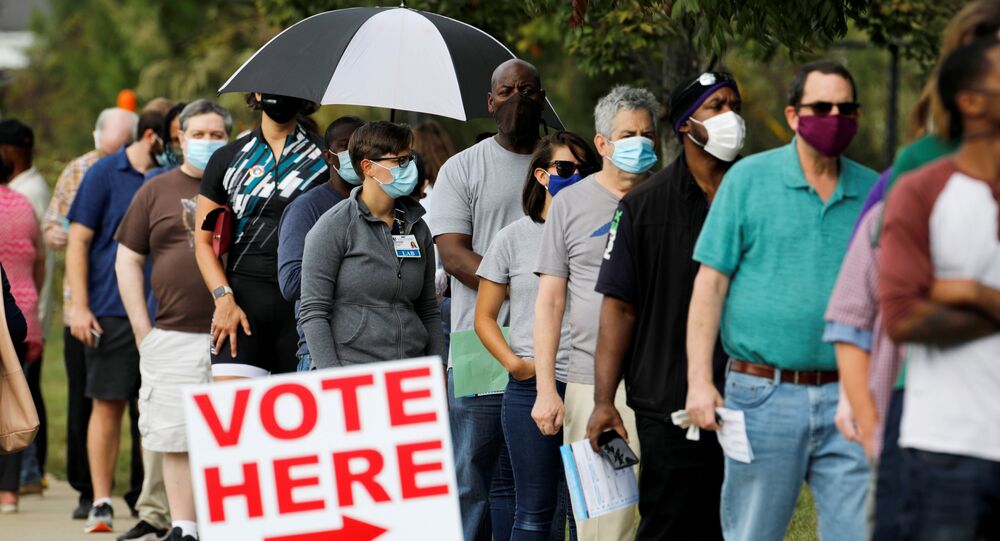 Fears over the US election cycle being postponed next month due to the ongoing coronavirus pandemic have surfaced following US president's short battle with the disease, media have reported.

Postal votes continue to arrive from across the United States ahead of the 3 November deadline as media outlets speculate whether the ongoing US coronavirus crisis - the world's most badly affected country - could delay the election process.

The election race was also affected by Trump's COVID-19 diagnosis, after the US president tested positive after his first debate with Democratic rival, Joe Biden.

Trump was forced to miss several events but returned to the campaign trail after several days of treatment at Walter Reed Medical Hospital in Washington, DC.

But his COVID-19 diagnosis and handling of the pandemic is widely seen in the media as a massive blow to his claims that the US fight against the disease is improving, namely as the country struggles with 8.2m cases and over 220,000 deaths ahead of the elections, according to Johns Hopkins University.

Sputnik takes a closer look at what to expect ahead of the election run.

Multiple states have revealed severe discrepancies or problems in the current postal voting system in recent weeks, according to reports.

US president Donald Trump has already launched criticisms against Rep Ilhan Omar [D-MN], who he claims harvested ballots in her constituency and "totally illegal".

Further problems come after Michigan secretary of state, Jocelyn Benson, voiced concerns in September that the state may not have the full results of ballots "on election night", adding it could take "a few extra days" to count votes accurately.

Voters have also criticised alleged ballot errors with incorrect data in New York City, with councilman Jimmy Van Bramer stating that citizens were "not trusting this process" or the Board of Elections "to count the ballot right", reports found.

North Carolina's State Board of Elections, a key swing state for the elections, found 11,000 voters had received pre-filled applications in the mail with incorrect personal data, sparking concerns.

“With a month before the election, voters are likely to see an increase in election-related mailings,” Karen Brinson Bell, executive director of the State Board of Elections, said at the time.

Further headaches in the electoral system were found after California Republican general counsel, Tom Hiltachk, announced the state would not remove unofficial ballot boxes due to citizens already casting over 1.5m postal votes.

Unofficial boxes are illegal in numerous US states, but Hiltachk approved the containers as they were installed under the state's Assembly Bill No 1921, allowing volunteers to collect votes for county election offices.

​Can Trump Postpone Or Cancel the US Elections?

Expressing concern that mail-in voting could result in "voter fraud" and "rig the election" amid Covid-19 pandemic, Trump suggested several times that the election date be pushed back "until people can properly, securely and safely vote".

However, despite his protests, the US Constitution would only allow Trump to potentially set a new date for elections before the mandated inauguration as cited in the 20th Amendment.

Congress would need to delegate legislative power to Trump and the executive branch, while adding measures allowing courts to "ascertain whether the will of Congress has been obeyed", Newsweek reported in early October, citing a Congressional Research Service (CRS) report.

But an attempt to block or delay elections could see Trump face fierce backlash from Democrats, who are the majority in the House of Representatives and could block any executive orders prolonging his stay in the White House.

While the date of the presidential election is unlikely to be postponed, the results are expected to be delayed for several days to weeks as votes are counted, depending on the speed of collecting and tallying the ballots in each state.

Red vs Blue: Swing States and the 2020 Election Cycle

Trump has faced off with Democrats in North Carolina, Wisconsin, Florida, Michigan and Arizona in the 2016 election cycle, where he won against rival Hillary Clinton by a narrow lead and earned an electoral college win, according to the Telegraph.

The election also remains uncertain as Republicans bid on rising voter registrations in key swing states such as North Carolina, Florida and Pennsylvania, where Democrats have lost roughly 200,000 voters in the former two and 230,000 in the latter, according to data from the BBC.

Trump's attempt to woo crowds in Arizona ahead of the elections next month aim to boost his standing in the popular vote in the key swing state.

Young people are also expected to be disproportionately hit by the ongoing COVID-19 pandemic, who may vote for candidates with more wealth distributing platforms, influencing their vote, the BBC added.

Meanwhile, Nasheville's Belmont University is prepariong to host the debate from 9pm to 10:30pm on 22 October which will cover topics such as racial tensions in the US, climate change, national security, leadership skills and the American family, among others.

2020 US Election Live Updates: More Than 30 Million Americans Have Cast Ballots So Far