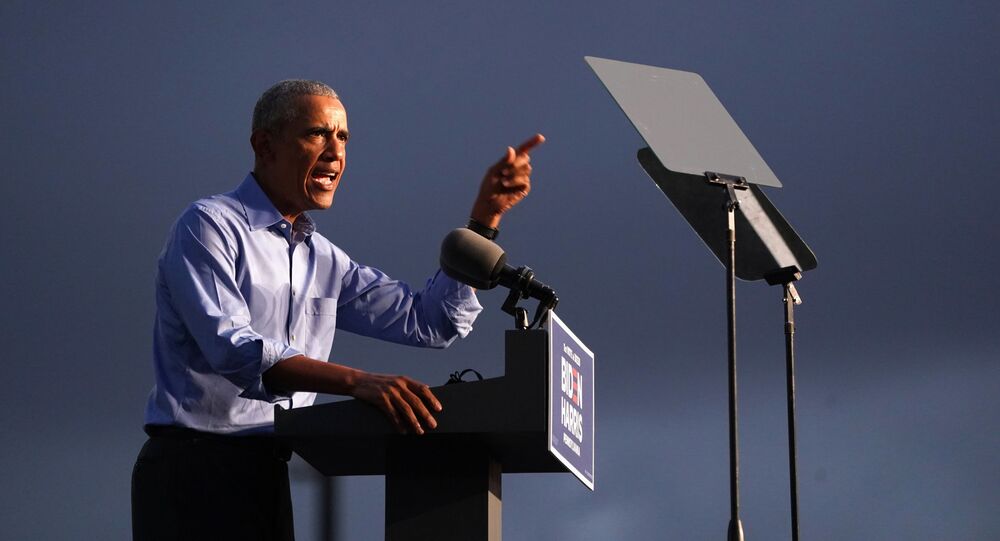 'We've Got to Vote Like Never Before': Obama Makes First Campaign Stop for Biden-Harris Ticket

On Wednesday, former US President Barack Obama began his tour in support of Joe Biden, his former vice president who now seeks the presidency himself on the Democratic ticket in November. Obama's first stop was Philadelphia, Pennsylvania.

Obama's stump speech in the City of Brotherly Love focused heavily on the failings of US President Donald Trump, who is seeking reelection in the November election.

"I've sat in the Oval Office with both of the men who are running for president," the former two-term president told attendees at the drive-in rally outside of the South Philadelphia Sports Complex, "and they are very different people."

Obama said that Trump "has not shown any interest in doing the work or helping anybody but himself and his friends or treating the presidency like a reality show he can use to get attention ... But the thing is, this is not a reality show. This is reality."

He faulted Trump for his handling of the COVID-19 pandemic, in which some 222,000 Americans have died thus far.

"We literally left this White House a pandemic playbook that would have shown them how to respond before the virus reached our shores. They probably used it to, I don't know, prop up a wobbly table somewhere," Obama quipped.

Obama also pointed out that Trump gets away with one scandal after another, and that if he had done them, he would have earned nicknames from the conservative media like "Beijing Barry."

​"Of the taxes Donald Trump pays, he may be sending more to foreign governments than he does to the United States," Obama said, noting he likely paid more in income tax working a summer job in high school than the $750 Trump did in 2019.

"We've got to vote like never before," he added.

The Keystone State is one of the most hotly contested states in US presidential elections. While Obama won the state in both 2008 and 2016, Trump, a Republican, carried it in 2016. However, Biden, who was raised in the northern town of Scranton, hopes to flip it to the Democrats once again. The state has 20 votes in the Electoral College.