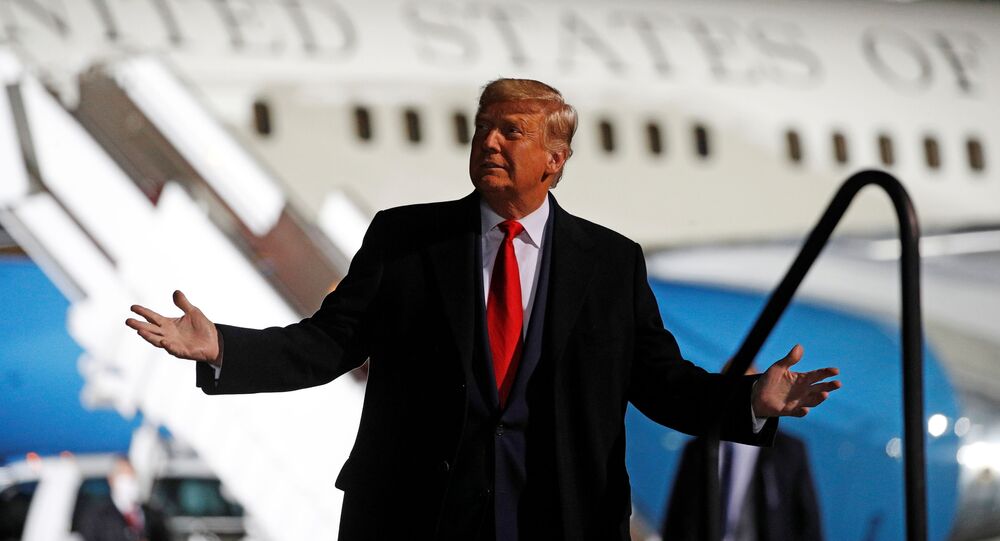 With US election season in full swing, American media giants, including the New York Times, have been closely scrutinising Donald Trump’s income and tax records over the past couple of weeks, with the president eventually calling some of these “bombshell” revelations little more than “fake news”.

The New York Times published a report it suggested would “shed new light” on President Trump’s “business pursuits” in China – less than a week after allegations against his Democratic opponent Joe Biden emerged in relation to his son’s dealings there.

The report cites Donald Trump’s tax records, allegedly obtained by the magazine, claiming that the president maintains three foreign bank accounts that have not been previously listed in his financial disclosures, including the one in China.

However, the media admits that these accounts are not held under his personal name, but rather under corporate ones, which explains why they have not been previously made public by the president.

Thus, in China, the account in question is managed by Trump International Hotels Management L.L.C., the company which owns THC China Development but also manages the president’s property around the globe, the New York Times explains.

Other accounts cited by the article include those in the UK and Ireland, which are held by companies that apparently relate to the president’s golf businesses. The tax records do not show the amount of sums that passed through the accounts in question, however, it is said that Trump International Hotels Management had reported just several thousand dollars from China in previous years.

A lawyer for the Trump Organisation, Alan Garten, explained to the Times, that the company had “opened an account with a Chinese bank having offices in the United States in order to pay the local taxes” while seeking businesses opportunities there and “explore the potential for hotel deals in Asia”.

However, Garten revealed, “no deals, transactions or other business activities ever materialised and, since 2015, the office has remained inactive”.

“Though the bank account remains open, it has never been used for any other purpose,” the attorney said.

Donald Trump’s Chinese initiatives have never been made a secret, as he openly pursued a Guangzhou office tower project there back in 2008. Four year later, the president’s THC China Development L.L.C., the one which is owned by the Chinese account holder, claimed $84,000 in deductions for legal and office expanses, as well as travel costs, according to cited tax records.

The Times also reports that overall Trump has invested at least $192,000 in five companies related to attempts to create enterprises in China. Since 2010, these firms have claimed at least $97,400 in business expenses, with some tax payments being reported two years ago.

"For a businessman prior to entering politics in the case of Trump, it is absolutely normal to have contacts all around the world or at least in some major countries to expand business. I think this is what Trump did", says Klaus Jurgens, a political analyst and journalist.

"He tried to, economically or commercially speaking conquer China which did not really work the way he planned. He never hid that fact, and you have to follow his hotel management development, his previous casinos, golf course interests and they were not only, of course, within the US but outside", Jurgens adds.

According to the journalist, it is not surprising that such an inspiring entrepreneur and investor as Trump, bearing in mind his "The Art of the Deal" memoire, was keen on maintaining close working relations with "government officials and government-run companies" in a bid "to expand into a country which has a different political system than in the US".

"So honestly this time I would not buy into NYT or many people would say “the East Coast intellectuals” attack saying whatever Trump does is wrong. I am not sure that the majority of the US population would buy into that", Jurgens says.

Meanwhile, a new book by Forbes editor Dan Alexander has recently estimated that by April 2019, the President’s daughter and senior advisor Ivanka Trump was granted a total of 41 trademarks to companies linked to her name by the Chinese government. The writer claims that these trademarks were approved 40% faster that those that had been requested before she landed a job in the White House. In summer 2018, Ivanka announced that she was shutting down her fashion business, however, some of her Chinese trademarks had still been pending by that time and dozens of them were approved later.

Is Joe Biden ‘The Big Guy’ in China?

The scrutiny over Trump’s tax records comes in the midst of scandal related to an unleashed email correspondence, allegedly belonging to Hunter Biden, the son of Democratic presidential runner Joe Biden, which is said to have been obtained from a laptop he left at a repair shop, according to the New York Post.

One of the emails dated 13 May 2017, reportedly sent to Hunter Biden from J2cR, a consulting firm, describe how “three Chinese communists" intended to send money to "the big guy” who would receive 10% equity in a deal with a Chinese energy conglomerate.

Fox News and Trump’s personal lawyer Rudy Giuliani later alleged that “the big guy” could be a reference to no one else by former Vice President Joe Biden at a time when he had already left the White House.

Some other emails, the authenticity of which has not been proven, also alleged that back in 2015, Hunter Biden had brokered a meeting between a top executive from Ukraine’s Burisma energy firm, where he has been serving on the board of directors, and his father, while the latter was still working in the White House and overseeing policy on Ukraine. Biden’s campaign denied that any such meeting had ever taken place, while the Democratic presidential runner repeatedly stated that he'd never had any involvement in his son’s business dealings in China or Ukraine.

Meanwhile, Donald Trump had called upon US Attorney General William Barr to “act fast” and “appoint somebody” in an investigation against Hunter Biden, in what he described as a “major corruption”. The US president insists that results of the probe should be shared before 3 November election.

According to political analyst and journalist Klaus Jurgens, from a "strategic viewpoint", the "cleverness" behind Trump's attacks on the Biden family relating to China could still be questioned, because of the President's own past dealings in the country and his continuous crusade against Beijing over trade policy and the COVID-19 pandemic.

"It was logical that the Biden camp would retaliate and try to find whatever they could in order to lend a point", Jurgens believes.

"In a nutshell I think both candidates will be well advised to drop China issue, focus on how to fight pandemic, how to get back to business. Whoever gets elected – they have to focus on domestic issues. That is the key task for the next president", he concludes.