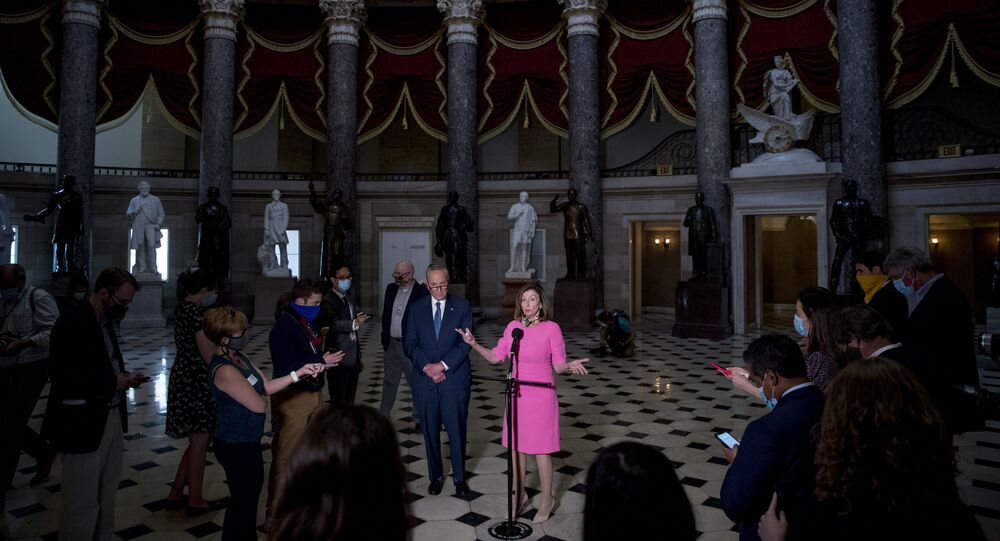 Areas of division in the talks include the scale of assistance to state and local authorities, tax credits Democrats want for lower-income families, liability protections that Republicans are pushing for but Democrats oppose, and a repeal of a credit for past business-tax losses that the GOP wants to keep but Dems strongly oppose.

US House Speaker Nancy Pelosi has said she is optimistic Democrats could soon reach a deal with the Trump administration on a new coronavirus stimulus package.

Speaking with Bloomberg TV, Pelosi said the administration had come a long way on health provisions regarding testing to tackle the outbreak, but that more work was needed to address state and local aid and liability protections, among other areas.

Pelosi and the US Secretary of the Treasury, Steven Mnuchin, who is currently travelling in the Middle East, are due to speak later today in an attempt to narrow differences between the White House and Democrats on a number of issues that have prevented an agreement since talks began in July.

Pelosi has insisted that if a bill is to be voted on before Election Day, it needs to be finalized and written by the end of this week.

US President Donald Trump has sounded a similarly optimistic note about a stimulus agreement, saying he was willing to offer more than the $1.8 trillion that the White House has put forward. Pelosi wants to inject $2.2 trillion into the economy, and has passed a bill to do so through the Democratically controlled House of Representatives.

In the run-up to the call, President Donald Trump continued to blame the speaker for holding things up.

“Here’s the problem: she doesn’t want to do anything until after the election, because she thinks that helps her,” Trump said on Fox News Tuesday. “I want to do it even bigger than the Democrats. Not every Republican agrees with me, but they will,” he also said, reiterating that he’s willing to go beyond the $2.2 trillion top-line number Democrats favor.

But Senate Republicans have opposed the $1.8 trillion-or-more size proposed by the White House, and will attempt to proceed with one of two planned votes on smaller-scale stimulus efforts that both the Trump administration and the House Democratic majority oppose.

With Election Day in two weeks, Senate Republican leader Mitch McConnell is aiming to shame Democrats for what he described as an “all or nothing” approach with their insistence on a $2.2 trillion bill.

But Trump believes that McConnell will eventually be persuaded to move forward with any bill agreed between the administration and Pelosi. “He’ll be on board if something comes,” he said.

Pelosi spokesman Drew Hammill said that Democratic committee chairmen have been directed to work with their Republican counterparts in the Senate to resolve the most stubborn sticking points. Democrats have resisted giving up on their priorities for local governments, workers, schools and health care. Other areas of difference include the scale of assistance to state and local authorities, and the tax credits Democrats want for lower-income families.

President Trump signed the initial $2.2 trillion coronavirus relief package into law on 27 March. The bill, the biggest economic stimulus package in US history, included direct cash payments (up to $1,200) to many Americans; $150 billion to help the healthcare industry; $500 billion for state and local governments and companies; and $350 billion in loans and assistance for small businesses