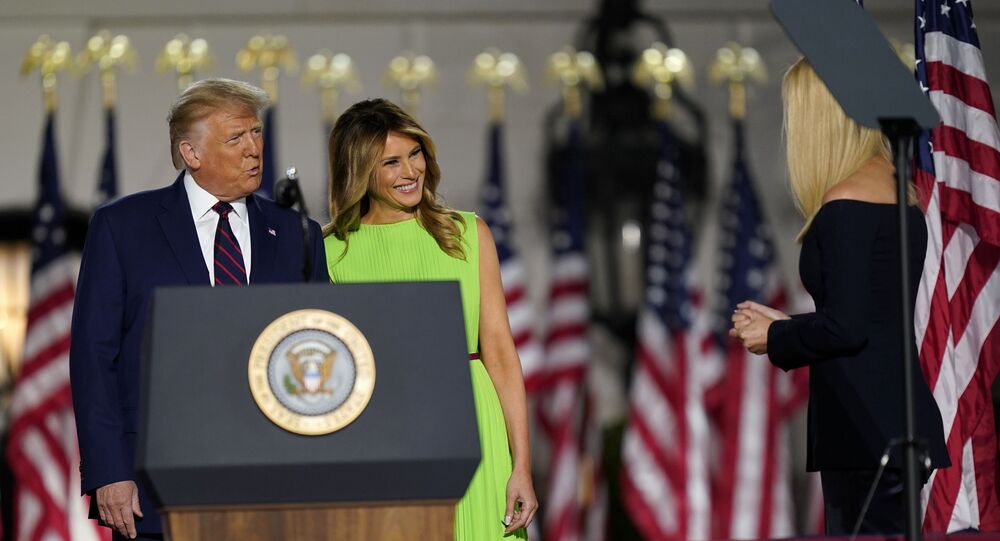 Earlier, CNN Politics reported that Melania Trump will join her husband at his presidential rally in Erie, Pennsylvania on the evening of 20 October.

US First Lady Melania Trump has cancelled a joint appearance with Donald Trump at a campaign rally on Tuesday because of a "lingering cough", a spokeswoman said.

"Mrs Trump continues to feel better every day following her recovery from COVID-19, but with a lingering cough, and out of an abundance of caution, she will not be traveling today," Stephanie Grisham said in a statement, as quoted by AFP.

This comes amid reports that emerged earlier in the day that Melania Trump planned to join her husband at his campaign rally in Erie, Pennsylvania. However, she was not expected to say anything at the event, the reports added.

© AP Photo / Julio Cortez
In this Sept. 29, 2020, file photo, first lady Melania Trump, wearing a facemask, walks towards her seat for the during the first presidential debate Tuesday, Sept. 29, 2020, at Case Western University and Cleveland Clinic, in Cleveland, Ohio

On 30 September, FLOTUS joined President Trump on stage at the end of the first presidential debate. Soon after that, Trump confirmed on Twitter that both he and his wife had tested positive for the COVID-19 infection. The US President spent three days at the hospital and 10 days later his physician confirmed that Trump has recovered and would continue participating in public events. As of today, both the US President and the First Lady have recovered from the coronavirus.