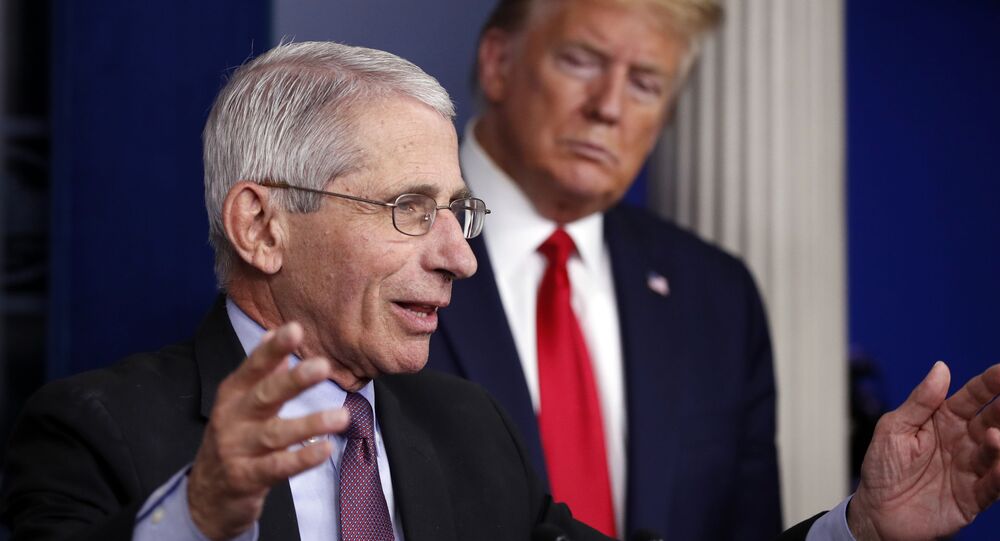 US President Donald Trump and the First Lady revealed at the start of October that they had tested positive for coronavirus shortly after attending a White House event. Several people who took part in the ceremony later confirmed their COVID-19 diagnosis.

Dr Anthony Fauci, a leading member of the White House Coronavirus Task Force, revealed during CBS’s 60 Minutes programme that he was “absolutely not” surprised that President Donald Trump got infected with coronavirus after attending a Rose Garden event dedicated to Amy Coney Barrett's Supreme Court nomination, during which many people did not follow social distancing rules and appeared without a mask.

“I was worried that he was going to get sick when I saw him in a completely precarious situation of crowded, no separation between people, and almost nobody wearing a mask,” the US immunologist said during the programme which aired on Sunday.

“When I saw that on TV, I said, 'Oh my goodness. Nothing good can come outta that, that's gotta be a problem',” Fauci said, calling the White House bash a “superspreader event”.

The list of those who have tested positive for coronavirus after attending the ceremony include Trump, his wife Melania, the President’s adviser Kellyanne Conway, Utah Senator Mike Lee, North Carolina Senator Thom Tillis, White House Press Secretary Kayleigh McEnany and a number of others.

Fauci’s comments came shortly after Trump told Nevada supporters on Sunday that he was right not to listen to scientific advice of locking the country down to stop the virus spreading.

“If I listened totally to the scientists, we would right now have a country that would be in a massive depression, instead we're like a rocket ship. Take a look at the numbers,” boasted Trump, a critic of quarantine measures.

According to law enforcement and campaign estimates, the Nevada rally was attended by nearly 13,000 people, many of whom ditched the face coverings during the event. The rally was held shortly after a similar outdoor gathering in the key swing state of Florida, the first major campaign event held by Trump since his bout with coronavirus.

More than eight million cases of coronavirus have been recorded in the United States since the start of the pandemic, which has resulted in more than 217, 000 deaths.