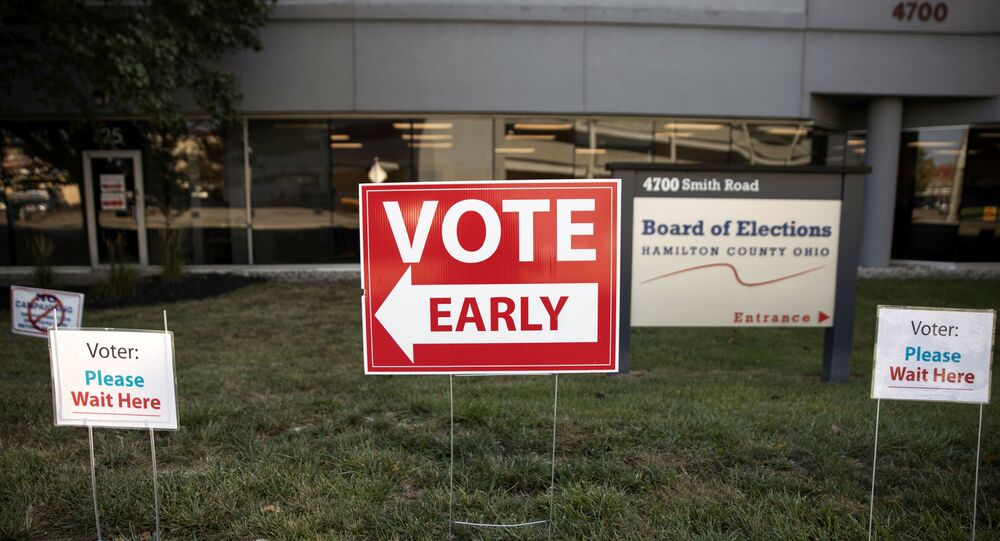 Trump, Biden in Frenzy to Woo Voters as Record-Breaking Numbers of Early Ballots Driven by Pandemic

With the final presidential debate set for 22 October, ahead of the 3 November election in the Unites States, Donald Trump and Joe Biden have been notching up the pace of their campaigning, while most nationwide polls have given a consistent lead to the Democratic nominee in the race to the White House.

US President Donald Trump and his Democratic rival in the upcoming November elections Joe Biden are gearing up to woo early voters ahead of their final debate, slated for 22 October, reports Reuters.

Amid the ongoing coronavirus pandemic, which has seen a fresh wave of spiraling cases in many countries, including the Unites States, health concerns have resulted in record-breaking numbers of people casting their ballots early to avoid crowds at the polling stations.

Nearly 26 million people have already cast their votes in the election, says the University of Florida-run US Elections Project.

The two contenders in the race to the White house have a packed itinerary before their final face-to-face at Belmont University in Nashville, Tennessee on Thursday.

Moderated by NBC News' Kristen Welker, the debate will grant Trump and Biden a final opportunity to spar on issues such as race relations, climate change, COVID-19, as well as more abstract topics like national security, "leadership" and "American families”, according to the Commission on Presidential Debates.
As of now, Trump and Biden plan to attend the debate in-person.

Donald Trump, who has been touting his own recovery from COVID-19 with a cocktail of experimental polyclonal antibodies after being admitted to Walter Reed hospital to receive treatment for the coronavirus after he and his wife tested positive on 2 October, is heading to Nevada.

Over 100,000 voters have already cast ballots in the battleground state, according to state data.

Trump, who trails Biden in national opinion polls and in many battleground states, is set to campaign every day leading up to the debate. His itinerary features stops in Arizona and North Carolina, according to campaign spokesman Tim Murtaugh.

On Saturday Trump campaigned in Michigan and Wisconsin, two battleground states he narrowly won in the 2016 election.

Joe Biden has opted to travel to North Carolina on Sunday, where state data shows that 1.2 million voters have already cast their ballots.

His running mate Kamala Harris is marking Florida’s first day of early, in-person voting on Monday with a visit to the state as part of her campaign schedule.

Despite Biden’s “robust leads” in the polls, his campaign manager Jen O'Malley Dillon was cautiously optimistic over the weekend, acknowledging that the national figures can be misleading, as “must-win” states are close.

​"We cannot become complacent because the very searing truth is that Donald Trump can still win this race, and every indication we have shows that this thing is going to come down to the wire," Dillon reportedly wrote in a memo to donors, adding:

“This race is far closer than some of the punditry we're seeing on Twitter and on TV would suggest… In the key battleground states where this election will be decided, we remain neck and neck with Donald Trump. If we learned anything from 2016, it's that we cannot underestimate Donald Trump or his ability to claw his way back into contention in the final days of a campaign.”

Yeah, Right… Facebook Censored Tiffany Trump Posts About Joe Biden Then Claimed It Was an Error