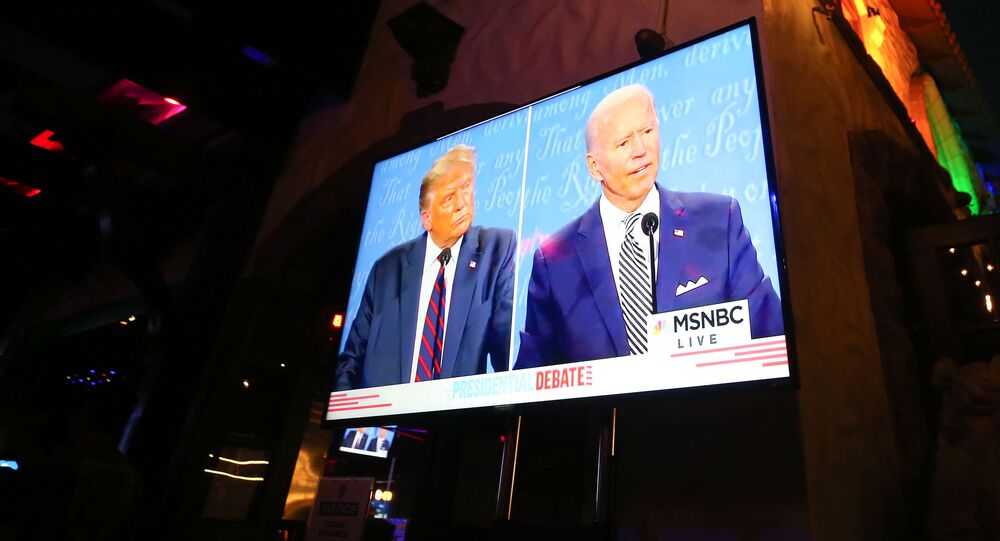 Donald Trump and his Democratic rival in November’s presidential election Joe Biden faced off at their first debate on 29 September, with their second matchup scheduled for 15 October scrapped after the US president pulled out, refusing to rely on a digital format.

The topics have been announced for the final presidential debate between US President Donald Trump and Democratic White House hopeful Joe Biden.

The matchup, moderated by NBC News' Kristen Welker, is set to take place in Nashville, Tennessee on 22 October. The event will witness the two rivals spar over issues of race relations, climate change, COVID-19, and others, according to the Commission on Presidential Debates.

Questions may also be asked on such topics as national security, "leadership" and "American families," according to a commission news release.

It was added that topics for the presidential debate are typically subject to change, depending on the more recent news cycle in the days leading up to the event.

The format is to be similar to that of the first debate, with every segment lasting about 15 minutes. The candidates will have two minutes to respond after the moderator opens each segment with a question.

The remaining time in the segment will be used by the moderator to encourage further discussion on the topics.

The Commission on Presidential Debates (CPD) did not explain any rule changes for the final matchup, although after the first event it stated on 30 September that additional “structure” needed to be added to the format of remaining debates to “ensure a more orderly discussion of the issues".

The first face-off between Trump and Biden on 29 September was widely criticised by the US public for being disorderly after the Fox News host and moderator Chris Wallace seemingly failed to take control of the event.

The nonprofit organising body of the US presidential elections subsequently scrapped the anticipated second debate, slated for 15 October, after the president tested positive for coronavirus. The diagnosis had prompted the debate organisers to shift the event to a virtual format, which was rejected by Donald Trump.

As the date of the presidential election on 3 November draws nearer, Democrat Joe Biden is ahead of the Republican president by a ten-point margin in national polls.

In the same period of 2016 Clinton was ahead of DJT by
3.5 pts. In 2016, the polls were skewed only by Trump-shame; in 2020, polls are skewed by that plus fear from riots, cancel culture & Big Tech censorship. DJT will win FL. pic.twitter.com/vgftR7OluD

​Republican consulting firm Trafalgar Group, one of the only pollsters to correctly predict Trump's 2016 wins in the swing states of Pennsylvania, Michigan, Wisconsin, Florida and North Carolina, gave the POTUS 46.5 per cent of the vote to Democratic rival Joe Biden's 45.9 per cent on Friday.

​A CNN poll dated 16 October showed the Democratic contender with a projected 53 percent of the vote as compared to Trump’s 42 per cent.

Responding to the polls, on 16 October Donald Trump tweeted that the polling figures looked good for him and predicted a "red wave" on 3 November.