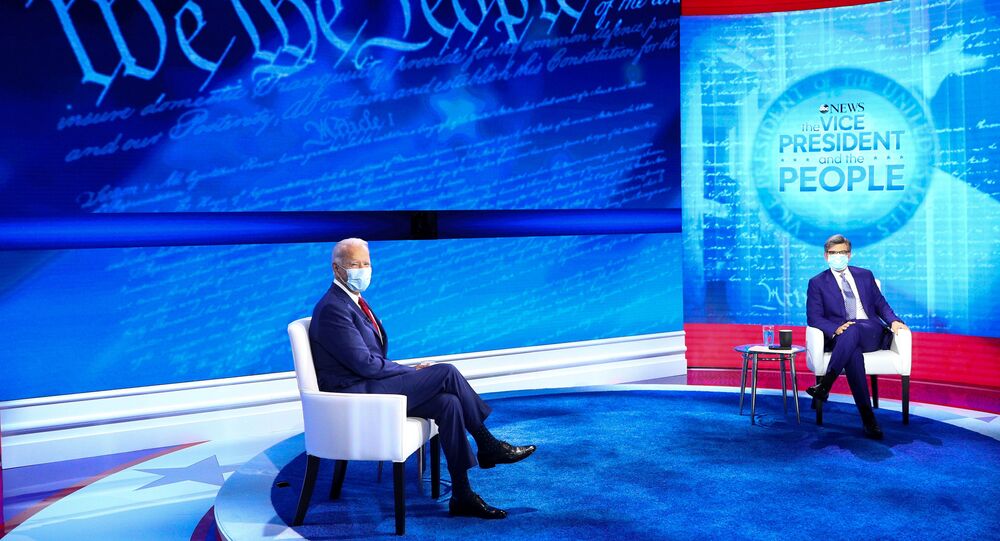 The ratings are in, and it appears as if Democratic presidential nominee and former US Vice President Joe Biden’s Thursday night town hall attracted more viewers than that of US President Donald Trump, whose program was simulcast across three networks.

While the former vice president’s event was only broadcast via ABC, Trump’s town hall could be viewed on NBC, MSNBC and CNBC.

An estimated 73.1 million viewers tuned into the September debate between Biden and Trump, Bloomberg reported.

Prior to the Thursday night broadcasts, NBC was slammed by a number of mainstream outlets that disagreed with the network’s decision to feature Trump’s town hall during the same time slot as Biden’s live event.

October 15 was initially slated to be the date of a virtual debate between the two presidential hopefuls; however, the Commission on Presidential Debates announced on October 9 that it was scrapping the matchup after Trump refused to participate.

NBC’s decision prompted over 100 actors and producers to issue a letter to network management, calling the conflicting programming “a disservice to the American public.”

Brian Steinberg, the senior TV editor at Variety magazine, contended that despite the initial backlash against NBC, the questioning Trump faced from NBC broadcast journalist Savannah Guthrie may have rescued the network from “one of the company’s biggest messes in years.”

“You’re the president. You’re not, like, someone’s crazy uncle who can just retweet whatever,” Guthrie told the US president while speaking on his decision to retweet a QAnon-linked conspiracy theory. Trump told Guthrie that he was unfamiliar with QAnon.

This clip where Trump gets compared to a crazy uncle while he refuses to denounce QAnon sums up how badly his town hall has gone. pic.twitter.com/GqvJGVS6Oo

Without mentioning ratings, Trump declared on Friday that he received “very good reviews” regarding his Thursday night town hall.

Outlets like Newsweek have claimed that teens on TikTok may have made an effort to deny Trump a ratings victory by tuning into Biden’s event on multiple devices at once.

“YouTuber Hank Green made a TikTok (that has been viewed more than 4 million times at the time of writing) in which he suggested that Trump hosted his event at the same time as Biden's so that he could brag about better ratings,” Newsweek reported.

NEWS >> Thousands of teenagers on TikTok are planning to stream Joe Biden’s ABC town hall on multiple devices so that Biden gets better ratings than Trump.

“On YouTube, ABC's live stream of Biden's town hall had around 2.8 million views at the time of writing,” the outlet claimed. “However, Trump's town hall was streamed on the NBC News, CNBC, and CNBC Television YouTube channels, and had 1.9 million, 1.6 million and 1 million views, respectively.”