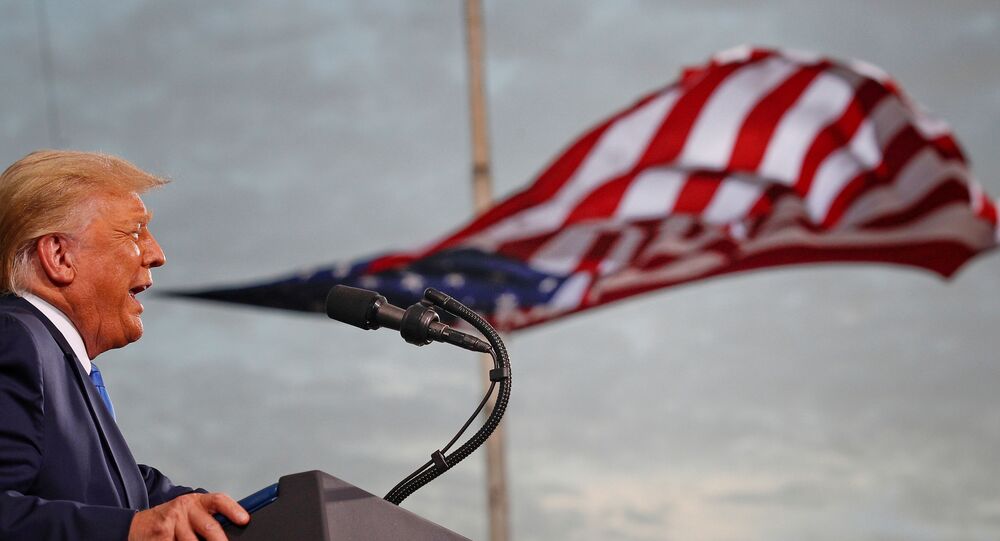 The satirical website was quick to react to the apparent praise of its work by POTUS, releasing another "true" story claiming that Trump had declared the humorous outlet his "most-trusted news source".

US President Donald Trump has continued his crusade against social media platforms that recently took action to stop the spread of a New York Post article potentially damaging for Joe Biden by reposting a story from the satirical news outlet The Babylon Bee, claiming that Twitter CEO Jack Dorsey had taken the matter into his own hands… literally.

In the piece, The Babylon Bee, which openly describes itself as "fake news you can trust", jokingly suggested that a recent Twitter outage was not accidental, but was purportedly Jack Dorsey personally grabbing a sledgehammer and smashing Twitter's servers in a desperate attempt to stop the bombshell NYP articles about Hunter Biden from being spread across his social media platform.

The Babylon Bee posting ridiculous stories mocking actual news is not something out of the ordinary, but Trump seemingly retweeted the story in all seriousness, although it was not clear if he had actually read the article.

Twitter Shuts Down Entire Network To Slow Spread Of Negative Biden News https://t.co/JPmjOrKPcr via @TheBabylonBee Wow, this has never been done in history. This includes his really bad interview last night. Why is Twitter doing this. Bringing more attention to Sleepy Joe & Big T

It did not take long for the satirical outlet to react to the sudden attention from the commander-in-chief, as it soon penned another story – this time claiming that POTUS had named The Babylon Bee "his most-trusted news source" and the rest of the media "totally fake".

The attention from the US president apparently caused a massive surge of visits to the satirical website, as the latter reported that some users were having trouble loading the site and reading the actual article as a result.

Despite being a joke, The Babylon Bee story about Twitter is correct in one regard – the social media platform, along with Facebook, did take steps to limit the spread of the NYP article about Hunter Biden. Twitter took down the original post featuring the article, prohibited it from being shared via retweets and DMs, as well as blocked some accounts that shared it – including those of the New York Post and White House Press Secretary Kayleigh McEnany. The actions of the social media platforms sparked outrage from both netizens and Republican politicians, who accused "Big Tech" of censoring the article due to it being damaging for their allegedly "favourite" candidate – Joe Biden.

The NYP article, based on files extracted from a laptop abandoned at a Delaware repair shop, says that Hunter Biden received an email from a colleague on the board of the Ukrainian gas firm Burisma, Vadym Pozharskyi, in which the latter thanked him for arranging a meeting with his father – then-Vice President Joe Biden. The emails, the veracity of which could not be confirmed by Sputnik, contradict statements by Joe Biden, who has claimed he did not discuss Hunter's overseas business affairs with him and dismissed concerns of a conflict of interest by saying that his son acts as a private person and not as a representative of the US government.