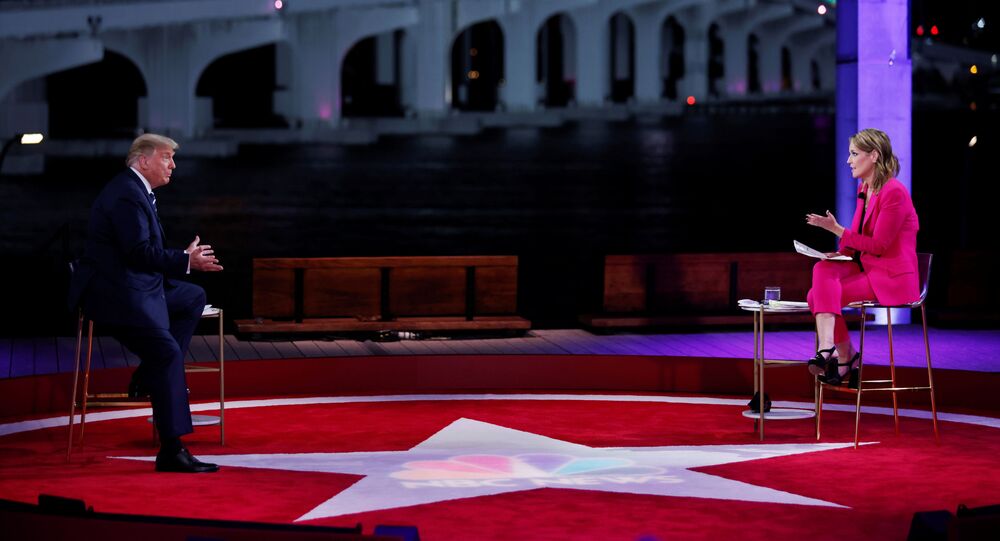 The town hall format was decided on after the two presidential candidates failed to agree on the scheduled head-to-head debate. The former vice president insisted on a virtual meeting with Trump, who has recently recovered from COVID-19, but the president has refused to go online.

During the competitive town halls on Thursday, President Trump and Democratic presidential nominee Joe Biden were pressured by NBC's Savannah Guthrie and ABC's George Stephanopoulos, respectively, on a range of topics, including the COVID-19 response, the Supreme Court nominee, and racial issues.

Trump on COVID-19: Lockdowns Are Unconstitutional

Trump said that several US governors were politically motivated in imposing state-wide lockdowns, though he did not specify what their motives were.

"The fact is we're winning all these cases because it's unconstitutional what they're doing and I think they're doing it for political reasons", Trump said.

Trump also said his opinion on wearing masks has not changed after contracting COVID-19, adding that he has been okay with people wearing masks or not wearing them. He defended his own handling of the virus, adding that as the leader of the country, he has to meet people every day and couldn't be just locked up.

When asked about his own experience with COVID-19, the president said he is not sure if he did a coronavirus test on the date of the debate with Biden, 29 September. "Possibly I did, possibly I didn't", the president said. He said that doctors did not state he had pneumonia, adding that initially, he felt terrible but after taking medicine his condition improved significantly the very next day.

When dogged about the issue of finally reaching an agreement on the next coronavirus relief-package, Trump said it was a negotiation process, which has, according to the president, been jeopardised by House Speaker Nancy Pelosi.

"You ever hear a word called negotiation?", Trump asked Guthrie. He added, "The problem you have is Nancy Pelosi. She couldn't care less about the worker".

Trump said that Republicans support the next relief package: "If we agree to something, the Republicans will agree to it", he said. However, Pelosi is more motivated by her re-election prospects, he believes.

"The Republicans want to approve a stimulus. She doesn't want to do it because she thinks it's bad for her election", the president said.

The former vice president, speaking at Philadelphia's National Constitution Center, blamed Trump for leaving the pandemic issues within the jurisdiction of US states.

When pressured on how he himself would deal with the pandemic, Biden said it is possible to both reopen businesses and schools and at the same time ensure safety measures that would prevent infection spread.

"You can open businesses and schools, if in fact you provide them the guidance that they need as well as the money to be able to do it", Biden said.

Trump reiterated that he has denounced white supremacy many times and emphasised that the left-wing Antifa group is causing much destruction in US cities.

He was then asked if he is familiar with the QAnon conspiracy theory and their belief that Democrats are part of a satanic paedophile ring that he will defeat.

Speaking of racial injustice, Trump said he has done more for the Black community than his rivals, and blamed Democrats in Congress for blocking a Republican bill to implement meaningful police reform in order to address policy brutality issues among the African-American community.

"More cops clearly mean less crime", Biden believes, but only if they're "involved in community policing not jump squads".

He also said he would establish a group comprised of law enforcement, social workers and minorities to look into community policing.

Since protests against racism and police brutality have erupted in the United States, both protesters and some regional authorities, including NYC Mayor Bill de Blasio and Los Angeles Mayor Eric Garcetti, have called for defunding or even dismantling aw enforcement departments. President Trump has been strictly opposed to the idea, calling instead for establishing law and order in the country.

In response to the moderator's question whether he had intentionally chosen Barrett for the nomination because he was sure she would back him, Trump replied that he never spoke with Barrett about her personal preferences, but added he saw no conflict between them so far.

"I think she will have to make that decision. I don't think she has any conflict at all", Trump said. "I never asked her about it. I never talked to her about it."

When asked if Barrett could possibly eliminate Roe v. Wade, a 1973 decision that ruled that restrictive state regulation of abortion is unconstitutional, Trump said he did not want to influence any potential decision in the Supreme Court to overturn the ruling, but he did mention it as something each state should decide.

Biden Says May Consider Court-Packing if Barrett Approved, Though He is Not a 'Fan'

The former vice president said he would explore the option if the Republicans establish a conservative majority in the Supreme Court by appointing Amy Coney Barrett before the election.

"I have not been a fan of court packing... it depends on how this [Barrett’s nomination] turns out [and] how it's handled", Biden said. "I am open to considering what happens from that point [Barrett's confirmation vote] on."

Joe Biden tells ABC town hall he is "not a fan" of packing the court but "it depends on how this turns out,” as he fails to give a firm answer pic.twitter.com/66R61INiWr

​Biden has repeatedly accused his opponents of "rushing this through" while having no time to deal with more pressing issues. He explained that he is intentionally vague on court-packing so as not to divert public attention from Barrett's confirmation issues.

Trump on His Reported Debt: 'Four Hundred Million Is a Peanut'

The president hit back when asked about reports that he is in deep debt of over $420 million. He said the reports were wrong, besides the amount was a tiny percentage of his net worth.

"Four hundred million is a peanut", Trump said, adding that he is actually "extremely under-levered".

He cleared up any conspiracies that he may owe money to Russia, but he did mention that he "probably" may owe some money to a foreign entity.

Trump also said the New York Times acquiring his taxes is illegal and the individuals responsible for it should go to jail.

He cited Moody's study which projected that his tax reform will create 19.6 million new good-paying jobs and increase US GDP by $1 trillion more than under the incumbent Donald Trump.

"When I said about the [President Donald] Trump tax cuts about $1.3 trillion of the $2 trillion in these tax cuts went to the top one tenth of one percent. That's what I am talking about eliminating, not all the tax cuts that are all out there", Biden said.

Let me be very clear: If you make under $400,000 you won’t pay a penny more in taxes under my administration.

Trump on Controversial Posts: 'I Do a Lot of Retweets'

When Guthrie mentioned Trump's recent retweet of a conspiracy theory that Biden and ex-president Barack Obama could be somehow linked to the killing of former Al-Qaeda leader Osama Bin Laden, Trump replied he does use social media a lot and if not for it, he would be silenced or censored.

"I do a lot of retweets", Trump said. "Frankly because the media is so fake and so corrupt, if I didn't have social media - I don't call it Twitter, I wouldn't be able to get the word out."

Biden Says US 'Not Very Well Trusted Around the World', Blames Trump

Though praising the recent Abraham Accords moderated by the Trump administration, Biden still argued Trump's foreign policy has made the global position of the United States less secure. "We're not very well trusted around the world", he said.

"He's pulled out of almost every international organisation. He gets laughed at when he goes to - literally not figuratively - when he goes to the United Nations", Biden said about the US president.

When asked if Trump deserved any credit for his foreign policy, Biden replied, "A little, but not a whole lot".

Biden also slammed Trump for what he called his "love letters" exchange with the North Korean leader Kim Jong Un and for contacting Russian President Vladimir Putin several times without disclosing the content of their talks.

"This president embraces all the thugs in the world", Biden said. "There is no coherent plan for foreign policy."