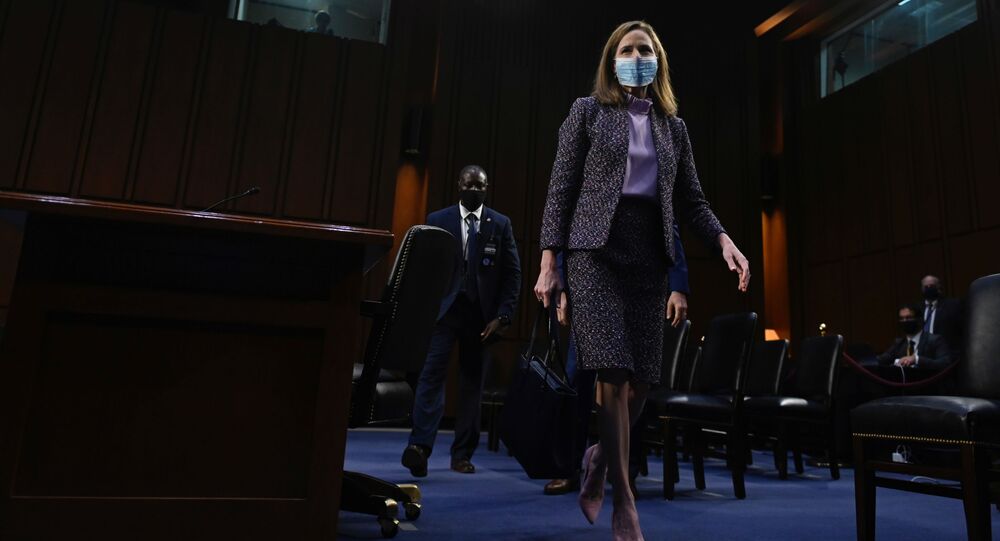 WASHINGTON (Sputnik) - US Supreme Court nominee Amy Barrett said during her confirmation hearing that she can not opine on whether the US president can pardon himself for committed crimes without her going through the judicial process to decide on the issue, but emphasised that no one is above the law.

Two years ago, Trump said via Twitter that he had the right to pardon himself but suggested will use that power. While Trump has not spoken lately about how far-reaching his presidential powers were, he has not changed his stance on the issue.

"That question may or may not arise, but it's one that calls for legal analysis of what the scope of the pardon power is", Barrett told the US Senate Judiciary Committee on Wednesday. "So because it would be opining on an open question, when I haven't gone through the judicial process to decide it, it's not one on which I can offer a view".

Asked by Sen. Patrick Leahy about Trump's assertion that he could pardon himself for a crime, Judge Amy Coney Barrett says she agrees "No one is above the law," but declined to comment on the legality of such an occurrence pic.twitter.com/ns967CIdup

Barrett said during her confirmation hearing that the Supreme Court "can't control whether or not the president obeys".

However, she said the Supreme Court rulings have the force of law and "no one is above the law".

The Supreme Court lacks enforcement power and relies on the other branches of government to execute its decisions, Barrett added.

As confirmation hearings for Barrett are underway, she is being scrutinised on a number of issues by Democrats in the Senate. They have strongly objected to her nomination for the seat, replacing the late US Supreme Court Justice Ruth Bader Ginsburg, and urged the Senate not to approve the nomination before the presidential election on 3 November.